Flying on the American Plan, Bring Your Own Food 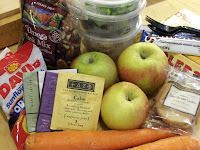 Tomorrow we're taking our son, Michael, on a college tour of East Coast colleges: Lehigh, NYU, BU, Northeastern, Tufts, and Wesleyan. It'll be exciting for him to walk around the campuses he's been reading about. We'll fly from LAX, rent a car and take a road trip from Philadelphia to Boston. Packing for a plane trip these days means not only clothes and something to read, but food. Only a few years ago, the idea of making food for a plane ride would have seemed obsessive. Not that the meals in Coach were ever very good--the vegetables were usually overcooked, the meat dry, and everything was over-salted--but all the airlines served meals that included a salad, a roll with butter, a hot entree, and a piece of cake. Those were the good old days. Now you're lucky to get a bag of peanuts or pretzel bits. Trying to capture a sighting of the elusive "in-flight meal," airlinesmeals.net posts photographs sent in by passengers from around the world.

When we were at a friend's birthday party last week, I caught up with Carlin Benjamin, who has a unique perspective on good dining. When she was a young woman, she was a West Coast Eloise, living in the splendor of the Ambassador Hotel. The other guests were the rich and famous, 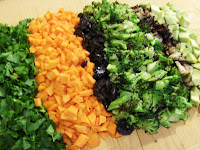 politicians, and movie stars. Currently writing a book about growing up in that Privileged Age, Carlin draws on her incredible memory and describes in great detail the culinary pleasures of an earlier period. When I told her we were traveling to the East Coast, she sent me a mouth-watering description of the menu served in the Pullman Dining Car, as it traveled from Los Angeles to New York. I don't envy how long that trip took, but I certainly would have liked to try the food.

Around 1888, Fred Harvey and Santa Fe decided to include dining cars on some of their trains. Mr. Harvey asked my grandfather to set up the Santa Fe dining car system. The idea was to give guests the feeling of a traveling hotel. An example of a menu from the Pullman Dining Car "Alhambra" out of New York includes all of the following for $1.00. Hard to imagine how all this cuisine could come out of a train kitchen.

Since the airlines have abandoned us, we have to provide for ourselves. In just a few minutes you can assemble good snacks for the plane: fresh fruit, cut-up carrots and celery, sunflower seeds, trail mix, a selection of candies and cookies, and some good teas. 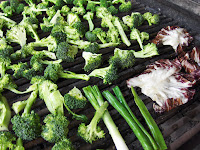 Sandwiches are good too, although on a long trip, they can get soggy. After a lot of experimentation I discovered a simple salad that holds up well on the long flight.

Lettuce wilts, but Italian parsley doesn't. Grilling caramelizes the broccoli. The carrots add crunch. The feta and avocado pull the other flavors together. 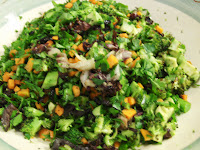 Put the broccoli florets, whole scallions, and radicchio leaves into a mixing bowl, drizzle with olive oil, season with sea salt and pepper, toss to coat well, then grill on a bbq or roast in a 350 degree oven until browned on all sides. Be careful not to let the vegetables char.

Have a Picnic for Super Bowl Sunday - Kimchi Chicken Wings, Salads & So Much More

A week to go for Super Bowl Sunday and I have my menu planned. No chips or dips. No ordering in (although a sausage pizza with mushrooms, on... 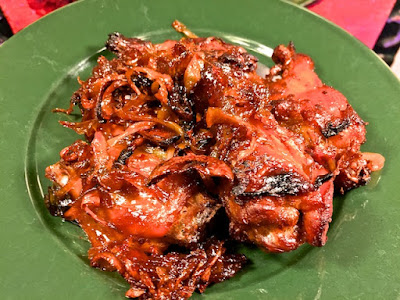