Morocco from Casablanca to Fez

From Casablanca on the coast to the inland city of Fez in the northern part of Morocco, the area looks very much like the American Southwest.

Looking out the window of the van, there's not much to see.

A well-paved highway cuts through the flat, dusty farmland, passing villages remarkable only for the number of flat roofed houses with satellite dishes and the occasional donkey cart.

I'm with a group of travel and food writers visiting Morocco. Some of us are here for the first time.

Before we leave Casablanca we stop at the Mosque Hassam II, the 3rd largest mosque in the world, the largest in Morocco. 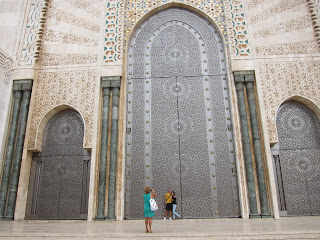 The scale of the doors makes visitors look very small. The detailing on tiles and metal work on the tall doorways is beautiful. The mosque overlooks the breakwater and harbor. 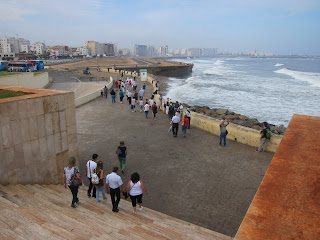 A few blocks away, restaurants and clubs share the same view. 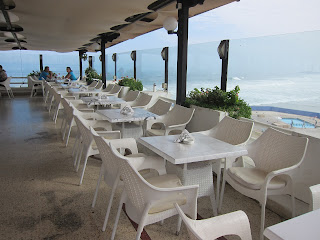 We grab a quick breakfast after our all-night flight before we climb in the van for a three hour drive.

Passing through villages along the way, small roadside cafes and stores selling drinks and snacks are the only commerce visible from the road. On the outskirts of Menekes we see something that makes us stop the van and get out for a look. 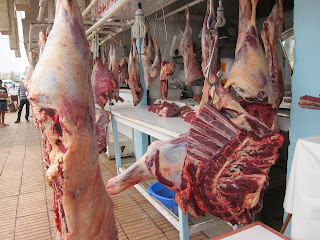 When you see that, you know you aren't in Kansas anymore. The butchers are friendly. Sides of beef and sheep hang outside in front of the shops. Cuts of meat are laid out on the counters. 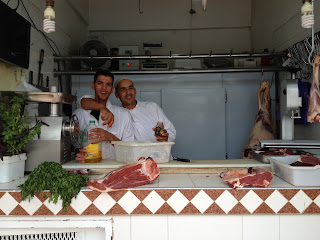 From that dusty scene we head on to Chateau Roslane, the largest winery in Morocco and worlds away from the butcher shops. A large, well-landscaped facility, we have a tasting of white, red and rose wines. All very good. Light and perfect for a summer meal. 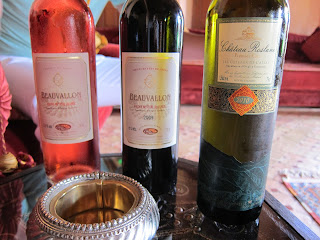 For lunch we eat in the hill-top holy city of Moulyidriss. The buildings press against one another, moving like waves up the hills and down into the valley. 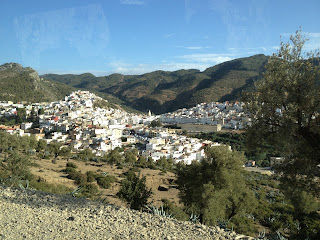 We want an authentic Moroccan meal.

We have lunch on what our guide says is called "the Food Street," because there are small cafes mixed in with dry goods stores and stalls selling olives and bread. 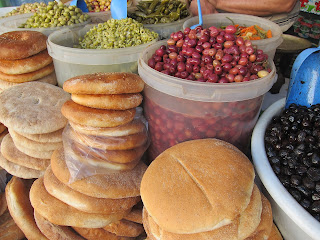 Restaurant Alaambra is a hole in the wall. An open-air space with a dining area in front with a cash register on one side and a few plastic covered tables in the middle. 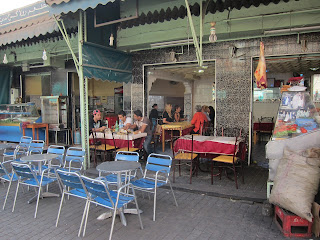 The tables and chairs look like they came from someone's house. A larger dining room is in back. We sit out in front where we can watch the cook prepare the meal. 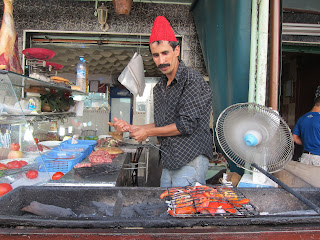 Wearing a bright red fez, Abdoul cooks outside in front of the restaurant. Opposite the cash register a row of clay tangines cook on a metal tray. 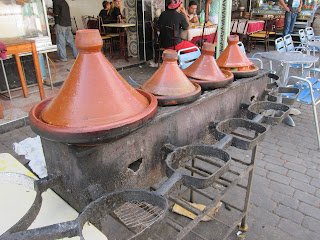 He checks the progress of the tangines and returns to his elevated kitchen on the other side of the outdoor area. 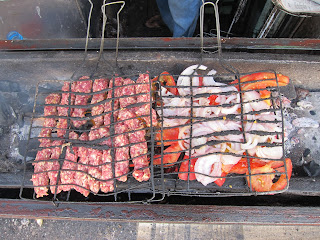 He smiles as he forms ground beef into thick dowels and places them into wire grilles with two sides. He flips one side on top of the other and places the meat on the gas powered grill next to ones filled with sliced tomatoes, onions and eggplant.

He fills two more wire grilles with chicken and beef fillets and adds them to the others. Fat from the beef explodes into flames. Abdoul deftly controls the fire by flipping the grilles on top of one another. A spray of water beats back the flames. 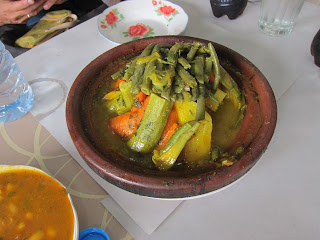 At the table, the conical top of a tangine is removed as if it were a hat removed out of courtesy. Sliced carrots, zucchini, string beans and chunks of potato have cooked in a bubbling broth. The heat from the flames having created a thick sweetened crust on the bottom of the tangine that requires tugging to remove. 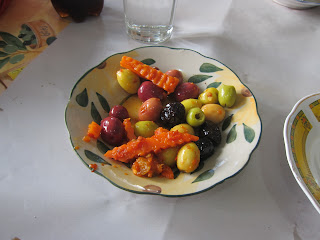 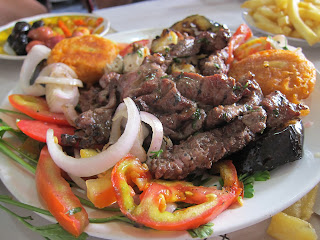 The fruit of Abdoul's fiery labors come to the table, a mix of charred meats, flavored by their own fat and the smoky flames, and the vegetable slices still mostly raw but singed and sweetened by caramelization.

Knives and forks give way to fingers tearing pieces of the soft white bread that are dipped into the tangine to soak up the delicious broth, then picking up pieces of onion, tomato and eggplant along with a choice of chicken and beef two ways.

Each mouthful benefits from a marriage of salt and fire sweetened fat. Here is umami, Arabic style. The whole much larger than the parts.

Against this marriage of flavors, the crispy croquette holds its own. The olives, French fries and white beans are in supporting roles. They might be overlooked entirely in the competition for attention but they also serve who stand and wait and in short order they too are consumed along with their more popular brethren. 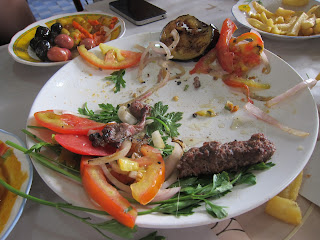 Very full, we stagger back to the van, aware that we are only half-way through our first day and there is so much more to experience.  Still working in front of his fires, Abdoul gives us a big wave and a smile as we leave.