When The Water Runs Out, Again: Farming In A Drought

Seven years ago I wrote a profile of James Birch. I met him at the Santa Monica Farmers Market. I was impressed by his hard work, determination and the quality of his produce. Since then, a great deal has happened in his life. He and his wife Dawn continue to work the farm, the delightfully named, Flora Bella Farms.

What has changed is the rain. When I wrote the profile in 2014, California was in the grip of a drought. Since then, there have been years with rain and without. But once again, in 2021, California is struggling with an epic drought. The issues are similar to what they were in 2014, although the situation could prove to be worse, depending on....well, the rain.

"The farm depends on snow melt from the Sierra Nevada Mountains and there was no snow or rain this year.  We will keep you aware of our attempts  to find water and let you know when we will be back.  Until then be well and please do your part to help save our planet. Thanks, Dawn and James Birch"

Happily, today I received this email:

"Great News.  Flora Bella Farms is planning to return to the SMFM the beginning of October.  We will be bringing our greens, mustards and lettuces.  We look forward to returning;
Forever Optimistic, James and Dawn"
Here's the profile from 2014:

Much of the time when I'm at the farmers market I'm so intent on what I want to buy I'm focused on  the produce only noticing the farmers behind the flat tables loaded up with fresh leafy greens, stone fruit and root vegetables when I pay. 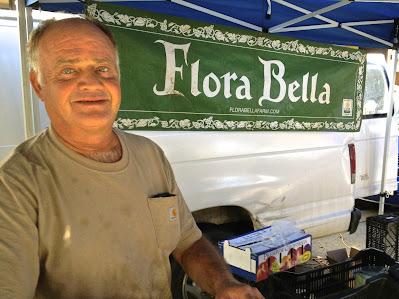 James Birch has a farm in the foothills of the Sierra Nevada Mountains near Fresno. The farm has a lovely name: Flora Bella Farm. But these days the farm has a problem. The area where he lives is called Three Rivers. Right now there are no rivers.

10.3.14 -
I feel for James Birch. He is having a tough year. Sitting in the shade, his weather-beaten hands on his lap, he describes prepping his fields for the fall planting. Cutting furrows with his tractor, the blades kicked up thick, Dust Bowl clouds of powder-dry dirt that made it difficult to breathe. In the telling of his story he laughed, no doubt because in the third year of a devastating drought, a farmer needs a sense of humor.
Birch doesn’t complain. He grew up around farming. And farming is what he knows, so he’s not about to quit even if these past several years have been really hard.
Throughout the Western United States and especially in California, farmers have been dealing with a multiyear drought that shows no signs of ending. It’s gotten so bad, fertile fields have been taken out of production because there’s no water for irrigation. That means lower crop yields and higher prices for consumers.
The problem begins in the mountains. Within sight of Flora Bella Farm, the Sierra Nevada runs for hundreds of miles. The line of rugged peaks cuts along the eastern side of the state. The importance of the snowpack that collects on the Sierras for California’s agriculture cannot be overstated.
The farms around Birch in Tulare County north of Bakersfield depend on that water. After a buildup of snow during the winter, when the temperatures warm, the snow melts and collects in the Upper Kaweah Watershed, which feeds the north, middle and south forks of the Kaweah River, irrigating Birch’s fields. But again this year the snowpack was below normal. And that was bad news for Birch.

A dozen years ago I visited Flora Bella Farm because Birch and I were working on a farm-to-kitchen cookbook with California-Mediterranean recipes. On that visit, Birch walked me to the river next to the farm. The cool water ran fast and clear and was several feet deep. Last week he emailed a photograph that showed the problem in the most graphic way.
Birch stands on a completely dry riverbed.
Old-timers tell Birch that the last time the rivers dried up was in 1906 when a cowboy said he rode across the main fork and his horse’s hooves didn’t get wet.
In 2012 and 2013, the drought was bad. Knowing 2014 would be no better, Birch came up with a plan. He began converting his above-ground sprinklers to a drip system. He enlarged his holding ponds and filled them to capacity. But the drought was worse than expected.

One by one the Kaweah River’s three tributaries dried up. And by mid-August he had used all the water in the ponds. In late September, the only water on the farm comes from a low volume well that supplies his home.
Without water, Birch doesn’t have a lot to bring to the farmers markets where he sells his produce. When I saw him recently at the Santa Monica Farmers Market, he had only potatoes, squash, olivesand grapes to sell. Around him the other farmers had their usual bounty on display. Why, I asked him, do they seem to be unaffected by the drought?
The answer was pretty simple. Birch relies entirely on the Sierras’ snowmelt to irrigate his crops. The other farms have allotments from the California Aqueduct, which transports water 500 miles south from the San Joaquin-Sacramento River Delta, or they have high-volume wells that pump groundwater from the vast aquifers, the water-bearing sandy soils that lie beneath many parts of California.
Birch does not have access to either the aqueduct or to groundwater. Because he is in the foothills of the Sierras, the aquifer is too deep for him to reach except at great expense. And, even if he had the money to dig a well, the water-drilling companies in the area have a two-year waiting list.
In the spring he knew the snowpack was below normal so he planted potatoes and squash early because they need less water and could be stored for months without damaging their quality. Hoping for the best, he also planted leafy crops.
After the rivers and his holding ponds dried up, the only water available was the low-volume house well. That was a tough moment. Whichever plants he didn’t water, died. “First it was the cucumbers, then the peppers, tomatillos, most of the squash, the greens, and then everything in the fields,” he said.
In the orchard, his mature fruit trees produce apricots, Santa Rosa and Golden Nectar plums, nectarines and sour cherries. He also has younger Mandarin orange, lemon and pomegranate trees. All the trees are stressed. He doles out the little bit of water he can from the house well. But ultimately he faces another difficult decision. If the river doesn’t start flowing soon, he’ll have to cut down the older trees and plant citrus trees, which use less water.

Between a rock and a hard place

Birch is preparing the next planting. In his greenhouse he is growing Swiss chard, broccoli, cauliflower, lettuce, chicory, collards, cabbage, artichokes, fennel and cardoon seedlings. Now they’re strong and ready to plant. His fields are tilled and planted with mustard, spinach, radishes, mizuna, arugula and kale seeds. If he gets these crops to market, he will do well.
But Birch is in a bind.
Both the seedlings and seeds need moisture to grow. Birch reads the weather forecasts hoping storms will give him the rain he needs. But he has another problem. Winter is coming. The temperatures will soon drop. If the rains are late and the plants aren’t mature enough before the frost comes, they won’t survive.

Looking to the future

The truth is nobody knows when or if the rains will come. If the drought continues, farmers who are currently unaffected will be impacted.
Farmers relying on the California Aqueduct will find their allocations curtailed or eliminated. That has already happened in parts of the San Joaquin Valley, one of California’s most important agricultural areas. In an extended drought, farmers whose water comes from wells will also be affected. Heavy use of the aquifer has caused a dramatic drop in the available groundwater.
To survive in a drier climate, farmers like Birch are pursuing conservation efforts.
Birch has applied for a federal grant from the Department of Agriculture’s NRCS (Natural Resources Conservation Service) so he can switch completely from above-ground irrigation to an underground drip system.
To keep out the deer and squirrels that come down from the mountains looking for food and water, he built an 8-foot-tall fence. He planted a hedgerow of native flowering plants along the perimeter of the property to attract predatory insects to fight back infestations of aphids and mites, which eat the water-starved plants and carry destructive viruses.
In the best case scenario, if winter storms build up the snowpack in the Sierras., then the rivers will run as clear and deep as they have in the past, the aquifer will be replenished and Flora Bella Farm will be back to its former glory but this time needing less water than before.
And if the drought continues, Birch will be as ready as he can be.
Main photo: The cucumber fields at Flora Bella Farm in Three Rivers, Calif., during the 2014 drought. Credit: Dawn Birch
at August 09, 2021 No comments: