There are a handful of films that celebrate the pleasure of cooking: Big Night, Eat Drink Man Woman, Babette's Feast, and Like Water for Chocolate. 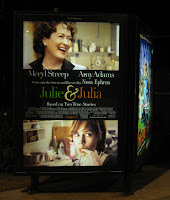 Meryl Streep owns the best parts of the film. In her portrayal, Julia Child has a goofy, good-natured flamboyance as she shambles around Paris first eating and then cooking classic French dishes.

In his comic masterpiece, The Discrete Charm of the Bourgeoise, Luis Bunuel refuses to let his characters eat a delicious-looking roast chicken. While Bunuel wanted to torture his bourgeois for their vices and indulgences, Nora Ephron celebrates people who enjoy eating and cooking. For Julie and Julia, two very different women in very different times, cooking changed their lives.

Julia Child became the teacher extraordinaire for a generation who wanted to master the Art of French Cooking. Her book became a standard along with The Joy of Cooking. Her PBS show, The French Chef, ran for ten years and made complex French techniques seem positively fun.

As her blog, book, and the movie make clear, Julie Powell was living an unglamorous life in a very small apartment when she stumbled on an idea that would make her famous. Blogs were becoming popular and Julie needed a project that would put shape to her life. Putting 2 and 2 together, she came up with the inspired idea of cooking every recipe in volume one of Julia Child's Mastering the Art of French Cooking in a year.

Blogging allowed an internet audience to follow her daily diary entries as she struggled to learn French kitchen techniques so she could master classics like boeuf bougoignon which is featured prominently in the film. Unedited and spontaneous, the blog struck a cord and her online audience made her famous.

Amy Adams brings real charm to the character of the blogging-novice cook, but Julie's cooking always seems a means not an end. Cooking everything in Julia's book is a project. Mastering boef bougoignon is a task. What she cooks is enjoyed by her husband and their friends but only in the scene where Julie tastes a poached egg for the first time do you see her really enjoy eating.

Julia's part of the movie, mostly her days in Paris when her husband, Paul, was stationed in the American embassy, is culled from her posthumously published memoir My Life in France. In the book and the film, she talks about her love for classic French cooking and Paul.

For a foodie, watching Julia eat her way through the best of French cooking is sheer pleasure. And for someone who likes to cook--that would be me--I was deeply moved by the way Nora Ephron, herself a dedicated cook, lavishes attention on the details of cooking.
at August 05, 2009 No comments: