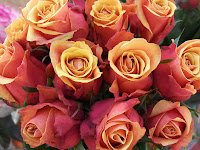 We have a Sunday routine. Our friends Annette and Ron come over. We watch 60 Minutes, catch up, and have dinner. Last Sunday I didn't think they could make it because they'd been in Japan all that week. I assumed that if they were back in town they were probably jet lagged and wouldn't want to leave the house. But I didn't want to break the weekly tradition, so I emailed them anyway that if they were up for it, Sunday dinner was still happening. Then I went about my business and forgot completely about the invitation.

30 minutes before they would normally come over, Ron called to say that they would be arriving as usual. Knowing that they're usually a half hour late, I had an hour to make dinner. 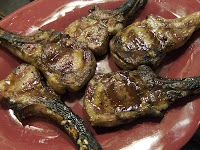 That's where the farmers' market comes into play. For my mother's generation quickly pulling together a meal meant using prepared foods, canned or frozen. Because we shop at our local farmers' market, we always have a good selection of fresh vegetables and fruit in the refrigerator. 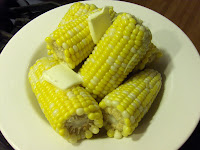 That morning I had picked up flowers for the dining room table and fresh corn, carrots, Haas avocados, scallions, cantaloupe, and 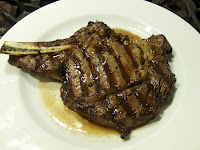 From what I had bought at the farmers' market, I made a salad, corn on the cob, and cut up a cantaloupe. I added a feta cheese-tapenade appetizer plate with olives and a fresh bread from Bay Cities in Santa Monica and I pulled out a banana chocolate-chip cake I'd made a few days ago. I could have stopped at that point. We had a full meal, vegetarian except for the salami in the salad, but our friends needed protein after their long trip so to fill out the meal, I grilled a rib-eye steak and a half dozen lamb chops.

The heart and soul of the meal was the farmers' market produce. Making the whole meal only took 45 minutes. Everything was ready when Ron and Annette arrived, jet lagged and very hungry. 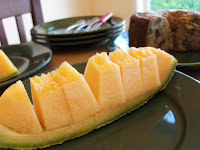 The felino salami and comte cheese came from Bay Cities. I recommend both.

Heat the balsamic vinegar in a small saucepan over a low flame until reduced to 1 tablespoon. Let cool.

Put the ingredients in a salad bowl, dress with the olive oil and reduced balsamic vinegar, and season with sea salt and pepper to taste.
at June 25, 2008 1 comment: 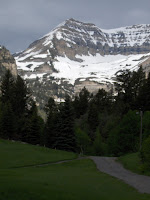 I don't think there's a 12 Step Program for people who are obsessive about cooking. I saw an analyst once who told me I shouldn't cook so much. Common sense suggested to him that someone who spent 8-10 hours cooking when he didn't have to has a problem.

I don't mind admitting that I am compulsive about cooking. My defense is that working in the kitchen is relaxing. I put on the radio and listen to NPR or plug in an iPod and play music. I enjoy the concentration required by cutting, measuring, and seasoning. I'm intellectually stimulated by the different possibilities of flavor, texture, and presentation. I'm challenged by the effort it takes to get a complex meal with multiple courses finished in time for a dinner party. And I get enormous pleasure when my family and friends enjoy my cooking.

When our son Michael was 7 years old he made a placard that praised what he thought were my significant qualities. At the top of the list was "Daring Cooker". At that young age he could see how important cooking was to me.

Even when I'm not home--when I'm traveling--I'm thinking about food. 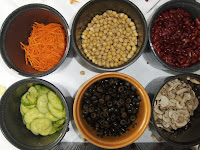 I wrote an essay for Peter Greenberg, the travel guru, with food tips when you're on the road. This weekend on Bitten I posted about my last trip to Utah to visit Michelle. Staying at the resort includes well-prepared meals three-times a day...and yet I started calculating how I could 'repurpose' what they serve. So was born my recipe for "Salad Bar Soup".

Ultimately maybe all this compulsiveness is a guy thing. But instead of obsessing about sports, cars or pursuing an esoteric hobby, I think about food and cooking.
at June 22, 2008 1 comment: