The Sundance Film Festival screens hundreds of films from January 20-30. Local insiders know that during the festival, the slopes are less crowded than usual. While filmgoers crowd the theaters, restaurants and bars, skiers enjoy shorter lift lines and uncrowded runs. I don't ski but I do eat. For those who are going to watch films, here are some suggestions about where to eat. 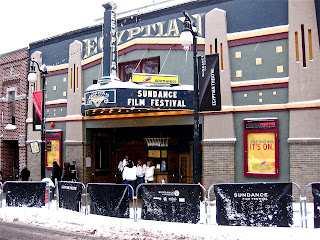 With heavy snow falling in Atlanta and New York City where it isn't wanted, there's comfort knowing that snow is also accumulating on ski slopes, where it belongs. 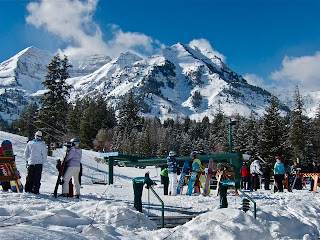 At the foot of Utah's Wasatch Mountains, dozens of world-class ski resorts are within easy driving distance of Salt Lake International Airport.
The mountains make an impression the minute visitors land at Salt Lake International Airport. In summer or winter, the white capped peaks are evidence that this is rocky mountain country or, as the state logo has it, "Life Elevated."  Salt Lake City itself is over 4,000 feet, so don't be surprised if you are a little light-headed until you acclimate.
It is no surprise that an area devoted to active winter recreation also has good restaurants where visitors can cozy up to a warming fire and a good meal. 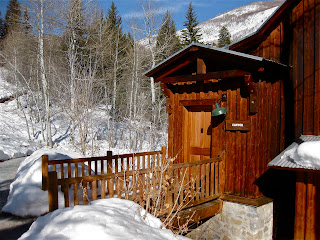 At Robert Redford's Sundance Resort, the only stand-alone ski resort in Utah, the pleasures of the mountain aren't limited to the ski slopes. Staying in one of the ninety-five cottages or in a mountain home puts a visitor up close and personal with the native spruce and pine trees growing close to the buildings.
Even the recently completed Redford Convention Center all but disappears in a thicket of trees, which makes it an ideal location for corporate retreats, weddings, and family celebrations. 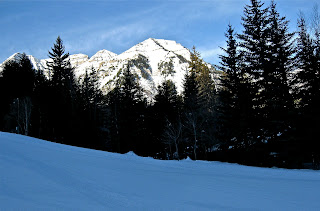 Skiers riding the ski lift to the back mountain can stop at Bearclaw Cabin, a warming hut with a panoramic view of the Wasatch Mountains and the Heber and Utah Valleys below. The menu is limited to hot drinks, soup, and sandwiches but given the setting, that seems perfect. 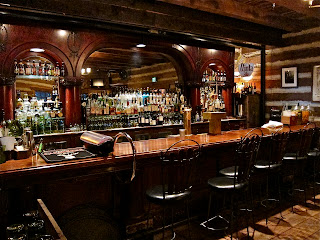 Having completed their runs, skiers visit the Owl Bar, kick back and listen to country music, have a round of drinks and enjoy freshly made snacks, including the house cured pickled eggs and beef jerky.
For full-course, sit-down meals there is the upscale Tree Room and the more informal Foundry Grill, with a fireplace and wood-burning pizza oven warming the room. 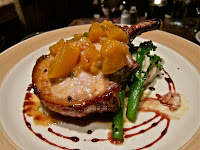 Knowing their customers want well-prepared, comfort food, both menus offer dishes that feed the body and warm the soul, like mustard rotisserie chicken, crusted pork on the bone with mashed potatoes and broccolini, braised black cod in carrot miso broth, halibut with rice and vegetables, roast loin of Utah elk flavored with blackberry jus, baby back ribs and cole slaw, and ratatouille with vegetables and quinoa.

With the meal finished and the table cleared, there's no rush to leave. The desserts will hold diners a few minutes longer before sending them off to bed, dreaming not only of sugar plumb fairies but about Executive Chef Mark Shoup's dessert menu of caramel apple pie with mascarpone ice cream, pear cobbler with almond crumble, or banana split with bricks of chocolate and vanilla ice cream topped with a melange of strawberries, walnuts, caramel and chocolate sauce on a plate coated with Chantilly cream and, oh yeah, a split banana.
For anyone achey from too much physical exertion on the slopes, massages are available at the Spa. At the Sundance Resort, fireplaces seem to be everywhere, including the Spa's quiet room, where it is easy to get lost staring at the logs, crackling and hissing as they are consumed by the flames. In the warmth of the quiet room, visitors sit and calculate the comparative benefits of another day of skiing weighed against the pleasures of a late breakfast in the Foundry Grill and relaxing with a good book in front of the fire. 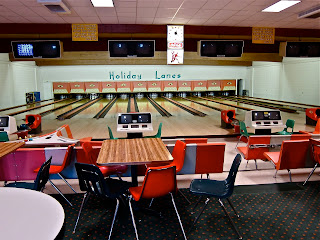 Traveling between Sundance and Park City, locals know to leave time for a stop in Heber City to time-trip back to the 1960s at the Holiday Lanes (565 N. Main Street) to bowl a few games and have a burger, fries and shake. Come early enough and there may be homemade pie.
The Dairy Keen, "Home of the Train," is also on Heber's Main Street. Hamburgers are the specialty but the menu also includes fish and chicken with lots of treats for kids who love watching the model train that circles the inside of the store.
Park City has restaurants to satisfy just about anyone's budget or taste. Affordable family-owned restaurants serve pizza, hamburgers, salads, Mexican food, sandwiches, barbecue and sushi. If you crave fast food, you can find Macdonald's, Burger King and Subway. 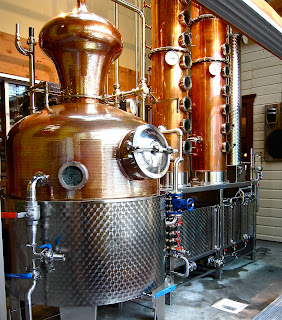 Half a block from the Park City Town Ski Lift, High West Distillery & Saloon advertises itself as "the world's first and only ski-in gastro distillery." Taking advantage of the recently liberalized liquor laws, High West offers tastings of wines and spirits in a converted three-story house, with a spacious, family style restaurant on the ground floor in what was once a garage for horses and, later, automobiles.
The spirits served at High West are highly rated by whiskey aficionados. Although High West does produce some of their spirits in the 250-gallon copper still near the entrance, the aged whiskeys are not distilled on the site but are blends of whiskeys sourced from other distillers. 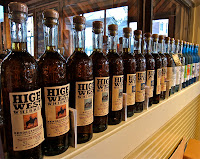 What is distilled at High West are clear spirits, ones not aged in oak barrels. The result is Silver Oat Whiskey and Vodka 7000, both of which are worth trying for their smoothness and unique flavor. In addition to drinks served in the saloon, bottles of spirits can be purchased in the small package store near the entrance.
Many of Park City's better restaurants, coffee shops and popular bars are located on Main Street, the center of the city's commercial life with stores selling tourist souvenirs, clothing, native crafts, the work of local artists, and the fun, interactive Park City Museum.
Insider's Tip: In the lobby of the Park City Museum, pick up a copy of the restaurant coupon book with discounts for local restaurants and attractions. Don't overlook the Park Record which sometimes has an even better selection of discounts.
At the bottom of Main Street, Robert Redford's Zoom specializes in large plates of hearty, well-prepared food. Ribs and coleslaw, herb roasted chicken with mashed potatoes and gravy, burgers, sandwiches, grilled fish, risotto, Caesar salads, mac n' cheese, onion rings, hot soup, and fresh salads fill out the menu.
Half way up Main Street, the Java Cow Cafe & Bakery is a local favorite for breakfast pastries, espresso beverages, sandwiches, and crepes. In summer, the homemade ice creams are a big seller, along with the hundreds of t-shirts featuring the Java Cow logo.
Nearby, Cafe Terigo, an intimate restaurant, has a wine bar in the inviting entrance way, a main dining room and two upstairs dining rooms, which are mostly used for parties, receptions and family celebrations. 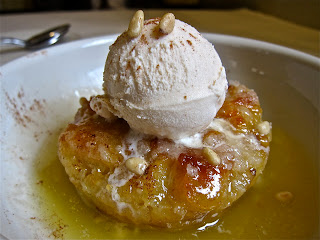 The menu sticks to basics: soups, salads, sandwiches, grilled meats and fish, pastas and desserts. Run by husband and wife, Ed (he's the chef) and Debbie (she's the maitre d') Axtell, Terigo, as locals refer to it, is a family affair. The dining room has the friendly feeling of your home, only better, because someone else is doing the cooking. Save room for their most popular dessert, the bread pudding with butter rum sauce, pine nuts and dried cranberries. It's a keeper. 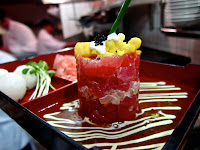 350 Main, a sprawling restaurant-bar, is a gathering spot for locals and tourists alike. Taking a global approach, chef Michael LeClerc is influenced by the cuisines of Mexico, Indonesia, India, Italy, Japan, France, and the American Southwest.
Locals crowd the bar ordering from the $6.00 tapas menu, focusing on the Ahi and Hamachi Tower, a tasty treat that goes well any of the drinks on the signature martini and cocktail list.
Something of a local legend, Bill White owns half a dozen popular eating establishments, as varied as one can imagine. Upscale Grappa, at the top of Main Street in a converted house, is well-known for quality meals in a homey setting. While the Windy Ridge Cafe and Bakery zero in on perfecting a salad-pasta-sandwich-comfort food menu in a cozy, unpretentious, country cafe setting.
Given the mountain setting, Wahso is an unexpected treat--an Asian grill. Wahso doesn't so much fuse Asian and Western cuisines as it respects both, pulling the best out of each tradition with the result that Duck Breast "A L'Orange" gets the Peking treatment and ginger scented lentils accompany the Morgan Valley Lamb. 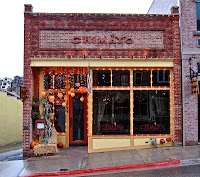 Another, different kind of fusion happens at Chimayo where French and Mexican cuisines embrace as happily as a newly wedded couple. In many of the dishes, Mexican heat enlivens classic French sauces. Pan seared sea scallops are enveloped with a Blood Orange and Jalapeno Beurre Blanc sauce. A rack of lamb eschews mint in favor of the sweet heat provided by a guajillo chile and cumin demi-glace.
A good wine list is supplemented with a selection of quality tequilas and imaginative riffs on the margarita, including one flavored with pomegranate, which might have been too sweet but proved to be light and flavorful. 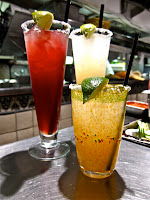 Park City is cowboy country, so it's natural to expect to eat some barbecue. But only at Chimayo are spareribs marinated all day in a chipotle marinade As with many restaurants in the area, local game animals are proudly served as bona fides of locally sourced meat. In the hands of chef Arturo Flores, elk, which can be chewy, is meltingly tender and flavored with bacon, peppercorns, sesame seeds, and a green chile Béarnaise.

For the appetizers, soups and salads, there are Italian-Mexican combinations in the fried calamari served with lime cilantro and lemon chipotle aiolis and the goat cheese and mozzarella chile relleno with a poblano pumpkin seed pesto. But mostly the starters menu focuses on familiar Mexican favorites which are prepared with the freshest of ingredients: ceviches, queso fundido, duck enchiladas, guacamole and shrimp, tortilla soup, avocado salad with papaya and vegetables with a pasilla chile vinaigrette.
All too often culinary combinations mean propping up the weakness of one cuisine with the strengths of another. When a chef has classic cooking skills and a great palate, fusion means discovering the best of each and bringing new awareness to old favorites. That's what happens at Chimayo.
So if you are spending time around the Wasatch Mountains expect to enjoy great scenery, world-class skiing, and excellent meals.
at January 25, 2011 No comments: