If you live near Santa Monica, you have already visited the open air Dining Deck on the top floor of Santa Monica Place. For anyone who used to visit the old mall, what a difference! 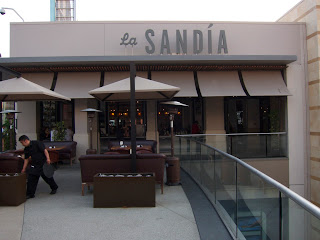 The old food court was on the bottom floor of the mall. Dark and airless, the fast food restaurants weren't especially inviting.
The remodeled mall improved in many ways, most notably with the elevation of the food court to the top floor. For restaurant patrons, free valet parking is available with validation at the Second Street entrance.


Recently I participated in a tasting for food writers at the side-by-side restaurants, La Sandia and the fusion restaurant, Zengo, both owned by the prolific chef Richard Sandoval. 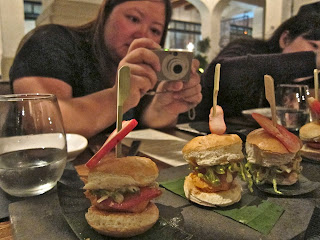 A side note: if you are ever in a restaurant and you see a group of diners all taking photographs of each course as it is placed on the table, you are probably watching food writers doing "research." 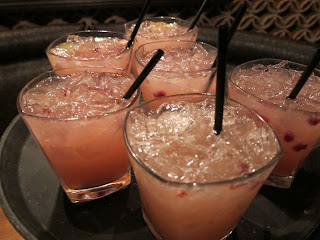 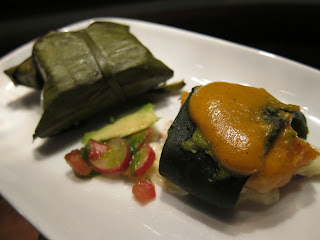 The tamal, as described by chef Sandoval:

From Mayan origin, meaning ‘wrapped;’ A traditional Latin American dish made of stuffed masa wrapped in corn husks or banana leaves, that is steamed or boiled. Viewed as a comfort food, tamales are enjoyed throughout all parts of the day. Dating back to 1200 BC, tamales have traditionally been prepared for feasts and celebrations. Mexican tradition states that on Dia de Reyes, all enjoy a special bread, containing a hidden doll. He who finds the doll hosts a Tamal Party in February. Over time, tamales have taken on regional influences, resulting in hundreds of varieties of fillings and wrappings found throughout Latin America. 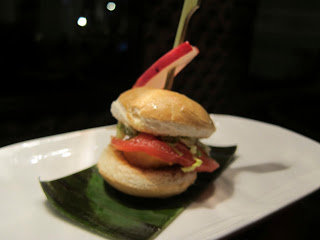 My favorite was the Torta de Tamal, in the style of Mexico City. Shredded chicken is tucked inside a corn tamal which is placed inside a biscuit-like bun with lettuce, tomato, onion, salsa verde and a spicy chipotle aioli. Speared by the long toothpick holding the sandwich together was a slice of radish, pickled in salt and lime juice.
Ah, carbo inside carbo, the definition of comfort food. Delicious. The heat from the spicy aioli and salsa verde countered all that starchy creaminess in the right way. 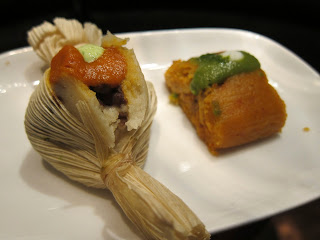 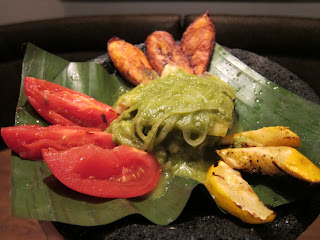 If you are a pescaterian, you can have a filet of mahi mahi cooked perfectly in the tamal de pescado a la Campeche. The fish is topped with a slab of moist masa, seasoned with the herb epazote, tomatoes and spiced with cilantro and Serrano.

Myself, I'm a meat eater and I thoroughly enjoyed the shredded chicken in the tamal frito Toluca and the pork tamal estilo Oaxaca. 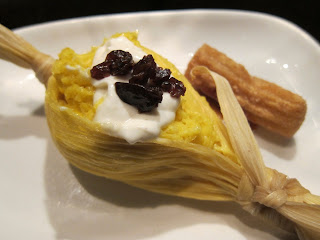 For dessert, chef Sandoval offers sweet yellow corn tamales wrapped in corn husks and topped with masticated raisins. The dessert tamales were good but the crispy churros were excellent.

La Sandia's sister restaurant, Zengo feels like the men's club you always dreamed about. A wide deck wraps around the dining room with views to the Promenade below. At night a refreshing ocean breeze gives the deck the proper amount of romance. With heat lamps a blaze on cooler evenings, the deck is the perfect spot to enjoy drinks, appetizers and a meal with your significant other and friends.

The dark wood and low lighting take some eye-adjusting. A long bar divides the restaurant into an inside dining room and the outside deck. Our waitress explained that "Zengo" means "give and take," which she suggested meant that the courses are supposed to be shared so everyone can have a taste of the varied and innovative menu.

Of course, "give and take" also refers to the fusion that is the menus focus. Latin American and Asian cuisines are mashed up in the most elegant way. From February 15-March 31, chef Sandoval brings together ingredients and techniques from Brazilian (Sao Paulo) and Chinese (Shanghai) cooking. 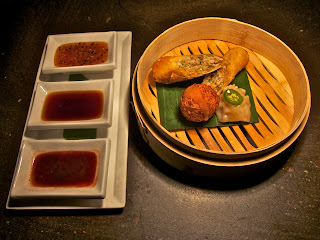 One of the best appetizers, the crispy Shanghai spring rolls look like traditional Asian fried spring rolls and they taste like very good ones indeed. Adding to the success of the spring rolls are the Brazilian tempero baiano spice mixture and juice from the acai berry added to the ginger dipping sauce. 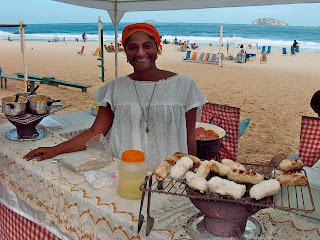 The salt cod fritters, popular in Brazil, here called coconut crusted bolinhos de bacalhau, are delightfully crisp on the outside, and soft, warm and sweet inside. The sweet and sour sauce, Chinese in spirit, is better than you've probably had in an LA Chinese restaurant. If you have been to Brazil, the bolinhos de bacalhau will bring back sense memories of women from Bahia, cooking their fritters on make-shift set ups on the beach.

I'm happy to say my wife and I have when we visited our older son, Franklin, when he was studying in Rio. 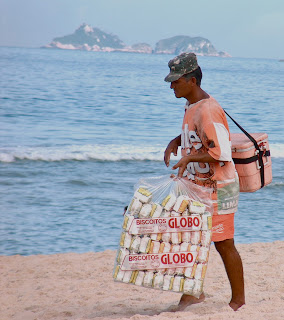 We enjoyed days on the beach, eating the delicious snack food carried by vendors who walk up and down the sandy beaches selling fried shrimp, crisps, fresh fruit and ice cold drinks. We also ate at dozens of restaurants as our son showed off his Portuguese and treated us to his favorite restaurants. 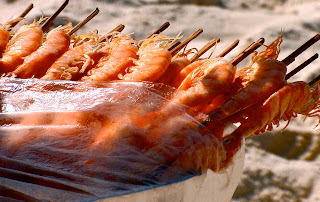 During February and March, at Zengo you can enjoy the national dish of Brazil, feijoada, a meat, bean and vegetable stew. Cooked low and slow, the flavors of pork, beef, bacon, black beans and a dozen herbs combine into comforting deliciousness. 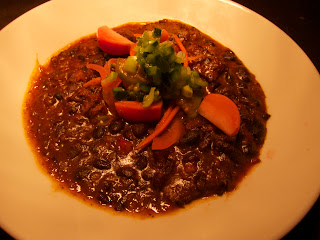 Zengo's version is refined and well-made. The black beans are cooked perfectly. Their sweetness blanketing the salty pork sausage and braised beef. Be sure to order rice with the feijoada. The salty sauce would benefit from the neutral rice.

The traditional Brazilian drink is the caipirinha, a stronger version of the Cuban mojito, made with cachaça. Zengo makes a very good caipirinha. The special drinks for the Shanghai-Sa Paulo festival are also worth trying: the pomegranate kumquat cocktail and the coconut caipirinha. 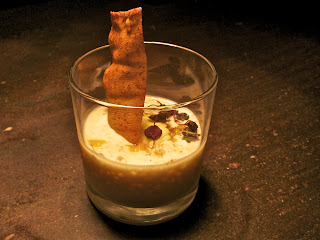 For dessert, the Shanghai-Sao Paulo menu offers a coconut tapioca with a mix of mango, kumquat, lychee, coquito nuts and shiso. All that is a mouth-full and you'll definitely enjoy every mouthful of tapioca, the perfect way to finish your tour of Brazil by way of China.
at February 13, 2012 1 comment: