Corn on the Cob Gets Dressed Up For Dinner 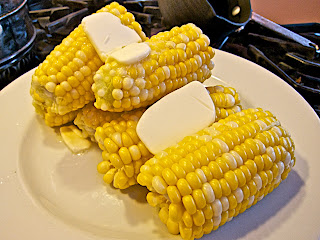 We celebrate summer with grilled meats and boiled corn, the golden ears arriving at the table, resting in silky pools of melted butter, ready for a dusting of freshly ground sea salt and black pepper. 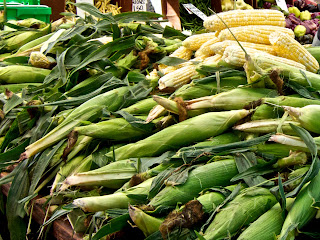 Many people hunger so much for corn they eat it every chance they can to such an extent that, sooner or later, familiarity breeds disinterest and even a little disdain.

Where it seemed so celebratory at the beginning of summer, by August they turn away when a platter of corn is placed on the table.

That's pretty much the way it's been for me.

On my last trip to our local farmers market, I hadn't planned on buying corn until I noticed that very few farmers were selling corn and those that were had very little to sell. Arriving late, the corn was almost sold out.

Talking with a farmer, I learned that local corn will disappear from the market in a couple of weeks. After that, no more corn until the spring.

I bought half a dozen ears, deciding we should have a farewell to corn dinner. Preparing the ears by grilling or boiling would still be great, but I wanted to do something different.

At Cuban restaurants in New York, corn on the cob is served with butter, mayonnaise and grated cheese. The sweet chewy corn kernels benefit from those added flavors.

I liked the idea of a topping on the corn but decided on a different direction.

Corn on the Cob with Garlic-Onion Crisps 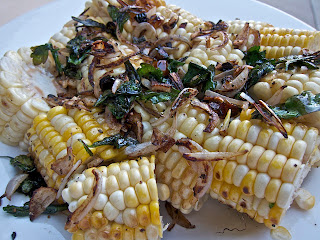 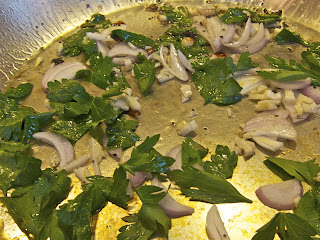 The corn can either be grilled or boiled. To grill, lightly drizzle each ear with a small amount of olive oil and season with sea salt and pepper. Place on a hot grill and turn frequently until lightly browned.  If boiled, place the ears of corn in a large pot of water, turn the heat on high, turn the corn frequently and remove when the water boils. Keep warm.

Heat the butter and olive oil in a frying pan. On a medium high flame, sauté the onions, garlic and parsley until lightly browned and crispy.

Cut the corn into 2" long sections, place on a serving platter. Sprinkle the onion-garlic-parsley crisps over the corn and serve.

Add heat to the sauté with 1/4 teaspoon cayenne powder.