Ramen at Home, Quick and Easy

At some point in their lives, everyone eats Cup o' Noodles. They're so easy to make. Just pour boiling water into the 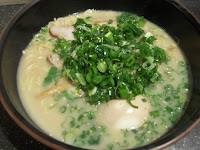 styrofoam cup with it's nest of noodles and bits of dried vegetables, cover, and a minute later you have overly salted "soup" and mushy noodles. On a cold, drizzly day, that can be ok, but it's not a meal-of-choice. Ramen is a step up from Cup o' Noodles, but the same principle applies. Boiling water + instant noodles + "flavor packet" = soup and noodles with vegetables bits. Real ramen bears no resemblance to the packaged ramen in the market. In Japan, ramen restaurants are favorite neighorhood hangouts, usually with a counter and several tables. I've noticed that patrons in ramen restaurants don't do as much talking as they do in other kinds of restaurants. I think that's because the ramen is simply too delicious to want to talk.

People who love ramen get very obsessive about their noodles. The Official Ramen Homepage has hundreds of recipes for packaged ramen contributed by fans. Rickmond Wong is the ramen fan-extraordinaire. Profiled in the LA Times by Russ Parsons, Wong's web site rameniac.com gives a comprehensive survey of ramen restaurants in LA. Everyone has their favorite. Anne Lai sent me to Little Tokyo to try the ramen at Daikokuya (327 E. 1st Street, Los Angeles 90012, 212/626-1680).

A narrow passageway of a restaurant, Daikokuya is on the north side of 1st Street, half-way 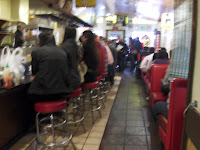 between San Pedro and Alameda. Of the half-dozen ramen restaurants on the block, only Daikokuya is packed with people at the tables and bar. Besides ramen, Daikokuya also has other traditional Japanese dishes: rice bowls, bento boxes, chicken teriyaki, mixed tempura, pork cutlet, sushi, and sashimi. But it's the ramen I came for, and while there are a dozen varieties to try, I wanted the specialty of the house: Daikoku Ramen, a large bowl of pork soup with noodles, fatty Kurobuta pork, a whole 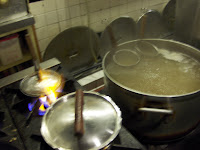 I took my place at the counter and watched the cooks drop baskets of noodles into the large pot of boiling water. The customer to my right, Jason, could tell I was a first-timer. He helpfully suggested I add some of the minced garlic and pickled ginger condiments to the soup. A good call.

All the ingredients are delicious, but it's the soup itself that makes the ramen at Daikokuya so memorable. If you've seen the Japanese comedy, Tampopo, you know how hard the shop keeper struggles to perfect her pork bone broth. She has to work from early in the morning until late in the evening to get the flavors just right.

I like to adapt restaurant techniques to cooking at home, but while I love the broth, that's too much work for me. I'll use homemade chicken stock instead. What I do take away from Daikokuyo is the realization that fresh ingredients can turn a lifeless package of noodles into a sumptuously refreshing meal. 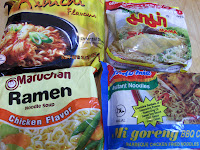 At home, ramen is quick and easy to make as long as you have a good supply of homemade chicken stock in your freezer. For the dried ramen noodles, there are hundreds of brands, flavors, and varieties. Try to find one that has the least amount of chemicals in their ingredients' list. Health Food stores sometimes carry packages of organic ramen. Almost any of your favorite fresh vegetables and cooked meats will work.

Follow the directions on the package to make the ramen noodles, then drain them and set aside. In a small pot, sauté the vegetables and chicken in the sesame oil until lightly browned, add the chicken stock and soy sauce and simmer for 10 minutes. Add the cooked noodles. Stir well and serve in a large bowl, topped with the scallions and the hardboiled egg if you want.
at February 20, 2008 2 comments: 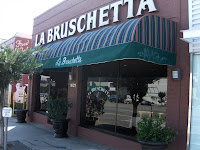 La Bruschetta Ristorante, a West LA landmark, generously hosted a buffet lunch for members of the Writers' Guild. For 24 years, Angelo Peloni, the owner, has proudly served high-quality, affordable Italian food. Twenty years ago, at the end of the last writers' strike, he told his friend, George Kirgo, then the President of the WGA, that he wanted to make a meal for the writers to celebrate the conclusion of the strike. Today, he did it again.

In addition to the delicious meal, Angelo provided the opportunity to get together one more time, to remind us how much we all liked the community of writers we 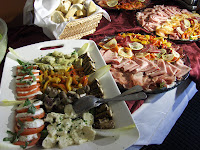 discovered on the picket line. 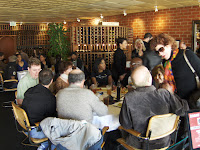 With his lunch, Angelo was telling us that we should stay connected, and what better way than to do that than with a good meal.

We enjoyed a tasting from the menu. An Antipasto Misto Della Casa started the meal with an array of meats, marinated and fresh vegetables, and cheeses. On the buffet line, those taste treats were followed by 2 pastas (Pasta Farfella al Pesto and a Penne Bolognese); then a Vegetali Misti, steamed broccoli, carrots, and zucchini; and at the far corner of the long table, 2 meat dishes (Polpette di Carne, 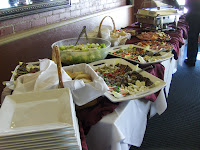 meatballs in tomato sauce, and Pollo Cacciatora). The meal ended with beautiful squares of Tiramisu. 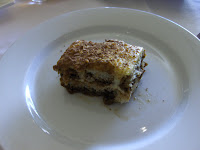 There's nothing better than a good meal to stimulate conversation. To my thinking, the Italians are the best at doing that. They don't allow any one dish to dominate the meal. Progressing by differences, small portions lead through a series of flavors, textures, and sensations. Today, at La Bruschetta, that stimulation provoked conversation that was sometimes about the food ("Did you taste the grilled eggplant rolled around the goat cheese? And that roasted red pepper!"), but mostly the conversation was about our lives. What did we do during the strike? What are we doing now that things have returned to normal?

The center piece of the brunch was Angelo's pastas, the sauces perfectly balanced. In the interest of stimulating meal-time conversation, I'd like to contribute a pasta recipe of my own.

Ziti with Mushrooms and English Peas

A very simple pasta that is perfect as a second course, between a salad and a meat course, or as a side dish with a grilled chicken breast or steak. For my vegetarian friends, the sauce is made with pasta water, sweetened with a pat of butter.

Make the pasta first. Fill a large pot with water. Add 2 teaspoons of Kosher salt and bring to a boil. Add the ziti and stir well. Put a colander in the sink. Stir the pasta every couple of minutes. The pasta is done when it is firm but not too soft, probably after 10 minutes. Put a heat-proof measuring cup in the sink next to the colander. Empty the water and pasta into the colander, making sure you capture at least 1 cup of the salted, cooking water. Set the cup aside. Return the pasta to the pot, drizzle with 1 tablespoon olive oil, 1 tablespoon of butter, and season with a little freshly ground black pepper. Toss to mix well and lay a sheet of tin foil over the pot to keep warm. Set aside while you make the sauce.

Heat 1 tablespoon of the olive oil in a sauté pan, over a medium flame, and lightly brown the

garlic, shallot, mushrooms, and peas. Add 1 tablespoon butter and 1 cup of pasta water. Reduce on a medium flame until the liquid has begun to thicken. Add the pasta and the Italian parsley and toss to coat the pasta with the sauce.

Divide the pasta into 2 portions. Top with the freshly grated cheese. For ultra-fine grating, use a microplane grater.