Summer's almost here and it's time to think about planning vacation travel. Wanting to ease some of the difficulty traveling, I applied for and received a Global Entry pass so at many airports I breeze through domestic security (thank you TSA Pre) as well as international points of entry.

I would definitely recommend Global Entry to everyone who travels more than a few times a year. The cost is minimal ($100 for 5 years) and the online paper work isn't too time consuming. Email me and I will give you all the details. 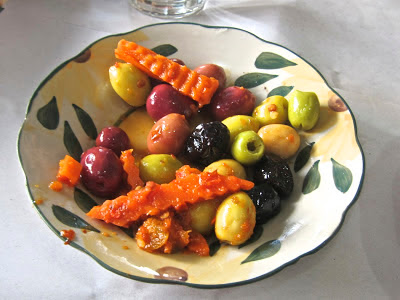 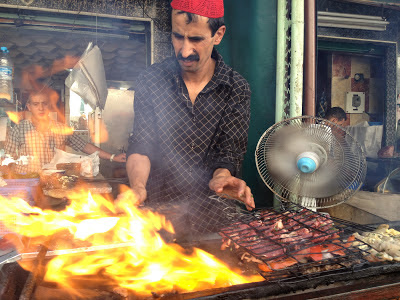 Last fall I took a trip to Morocco on a press trip with half a dozen other journalists. We traveled from Fez in the east to Marrakech and the High Atlas Mountains in the west and then to Essaouira on the coast. 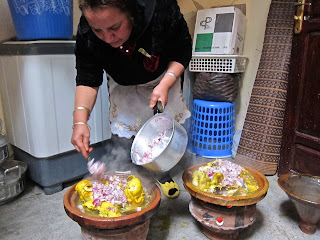 In the High Atlas Mountains, we arranged for a cooking lesson in the kitchen of a local cook. To get to her home on the grounds of a remote boutique hotel, we walked underneath walnut trees up a steep dirt switch-back trail we shared with men riding side-saddle on donkeys. "Shared" isn't accurate. If we hadn't jogged quickly to the muddy area to the side of the trail, the men on donkeys would certainly have bumped us out of their way. 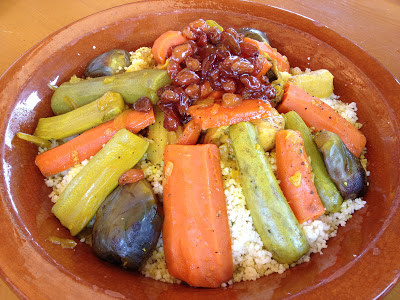 The walk up that hill was a challenge. By the time we reached the hotel at the top, we were tired, thirsty and pretty dusty. At that moment the walk didn't seem worth the effort. Then we walked out onto the wide deck of the Kasbah Toubkal where we were greeted with hot mint tea, Moroccan style--sweet and heavily caffeinated. In the crisp, clear air, we took in the breath-taking view of the surrounding mountains and the village of Imlil in the valley below. 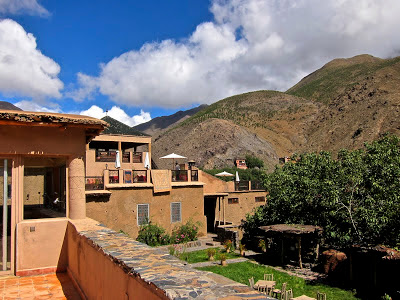 A few clouds floated by like rafters on inner tubes leisurely drifting on a vast blue lake. We sat and drank our tea and never wanted to leave. 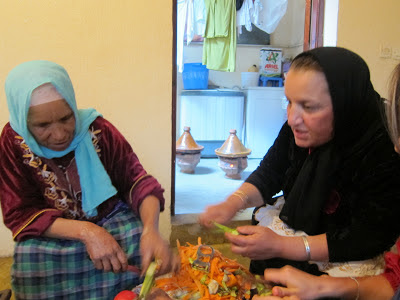 Sitting on squat stools in the concrete floored pantry, Haja Rkia ben Houari and Fatima gave us a cooking lesson. The two Berber woman generously showed our group of journalists how to prepare a chicken tagine, couscous with lamb and potatoes and bread cooked on an outdoor oven. 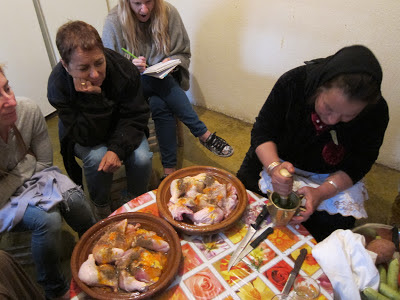 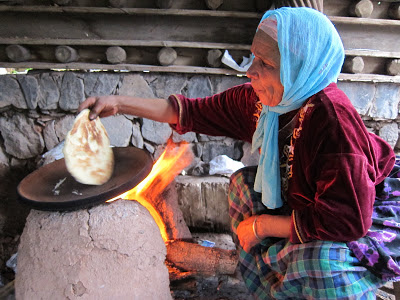 At another cooking class at the very elegant La Maison Arabe, an upscale inn next to Marrakech's souk or shopping bazar, Amaggie Waga and Dadas Ayada taught us about Moroccan spices and cooking traditions and how modern Moroccan cooking resulted from the many groups who came to call the area home--Berbers, Jewish spice merchants, invading Arab armies and French colonialists. 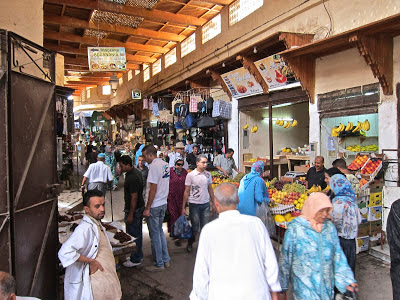 Besides the historical facts, taking a cooking workshop was a way to learn how to make Morocco's signature dishes, most importantly how to make preserved vegetable pickles, which now I serve at practically every meal, that's how much I think their briny-spicy crunch brightens almost any dish. 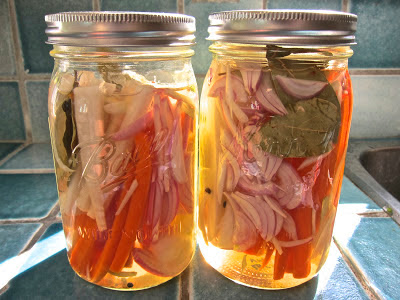 For the holidays last year, my present-of-choice was preserved lemons, another recipe learned at the Maison Arabe cooking school. 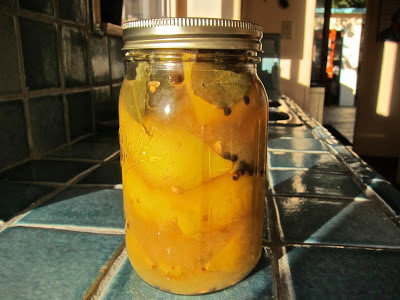 This year in the spring, another press trip took me to Northern Spain on a wonderfully comprehensive tour with Insight Vacations. From Madrid we headed due north to San Sebastián and then rambled along the coast heading west. In the cathedral town of Burgos I enjoyed an hour's lunch in a small bar with half a dozen men watching soccer and eating tapas. We stopped in Bilbao to tour the Guggenheim and gaze up at Jeff Koons' "Puppy." 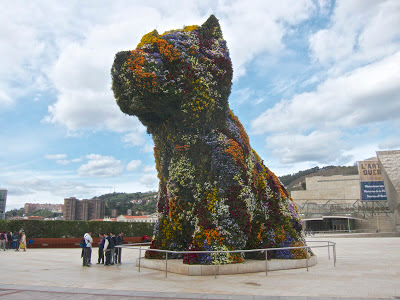 We traveled to a mountain top in the Picos de Europa mountains to visit the Cave of Covadonga the 8th century resting place of Spain's first Catholic king, Pelagius. 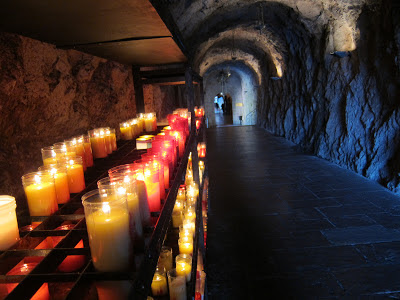 Our final stop was Santiago de Compostela, the end of the Pilgrims' trail and the Cathedral where it is said St. James' bones are buried. Inside the many rooms of the Cathedral there are statuary created over the centuries. The guide pointed out one that is very unusual--a very pregnant virgin Mary. 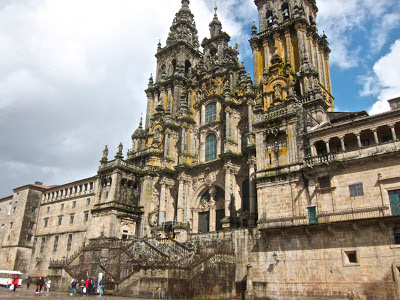 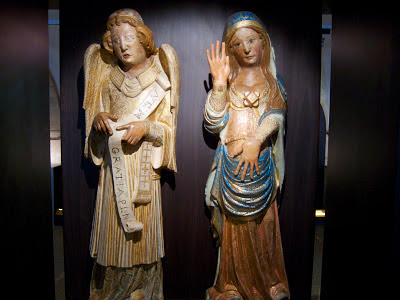 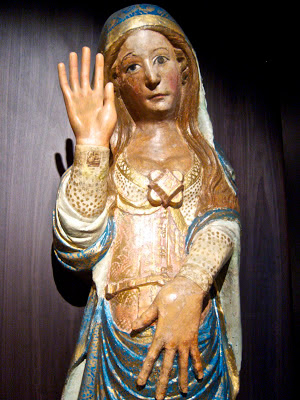 The trip mixed history, art and culinary traditions as we moved from tapas to pintxos, the Basque open faced sandwiches that I came to love. Whenever possible, Iberian ham, anchovies, sardines and octopus appeared on our plates along with delicious Galician beer, light and crisp. 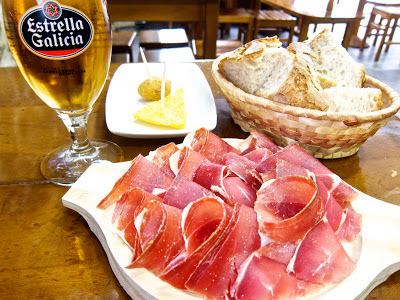 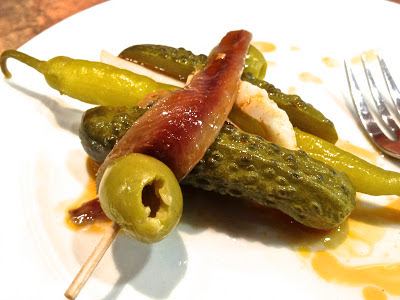 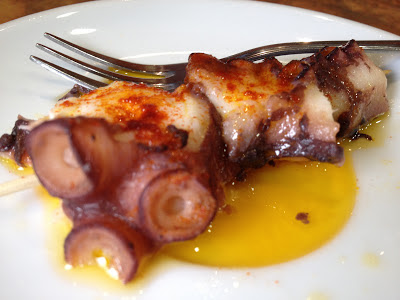 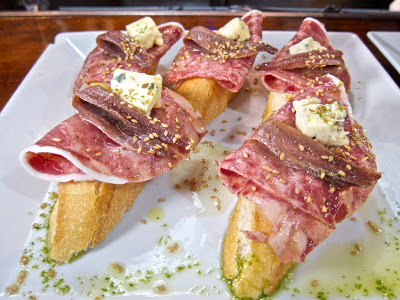 From that trip I brought home ideas for appetizers, simply constructed with contrasting flavors and textures. Small plate tapas and grilled bread-pintxos now precede the soups, salads and entrees on our dinner party table. Easy-to-make, full of flavor, a delight to the eye, I took home from Northern Spain a great addition to our culinary vocabulary. 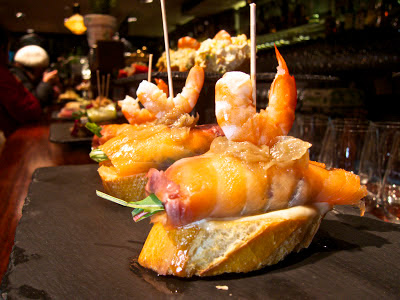 Both trips were for the Sunday print editions of New York Daily News and they showed me once again why it is great to get out town.

Former French Colony of Morocco Has Much to Recommend

Spain's Northern Coast, Far from Madrid, Barcelona and Bullfighting, Has Enticements of Its Own