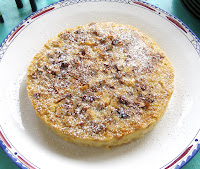 Since my wife has sworn off sugar, my Valentine's day options are limited. I used to bake her one of her favorite desserts--a chocolate banana walnut cake, bread pudding with chocolate and almonds, apple pie with crystallized ginger crust, or a raspberry custard--but not now.
Last year, the first year of Michelle's new regimen, I didn't know what to do so I ironed all her blouses. She liked that.
This year we decided our Valentine's Day treat would be a meal at our favorite restaurant. Last week we went to a tasting at the Il Fornaio (1551 Ocean Blvd, Santa Monica, CA 90401; 310/451-7800) opposite the Santa Monica pier. This month's Regionale features the exceptional cuisine of Lazio, which includes Rome.
We enjoyed the meal so much, we're going back for Valentine's Day, the last day of the Regionale.
Romans must love pork, because cured pork was a featured ingredient in a soup, two pastas, and an entree. Guanciale (pork cheek) enhanced the flavors of the Cannellini Bean Soup (Pasta e Fagioli 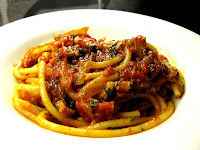 con le Cotiche) and gave depth to the Spaghetti in SpicyTomato Sauce (Bucatini all'Amatriciana).
Pancetta in the Spinach Cannelloni (Cannelloni alla Crema) contributed a salty heartiness to the chicken and veal stuffing. In the Sauteed Veal (Saltimbocca alla Romana), prosciutto combined perfectly with the sage and wine reduction to compliment the thin slices of veal.
But Romans apparently do not live by meat alone. The vegetarian and seafood dishes were particularly satisfying, especially one dish, the Grilled Hearts of Romaine 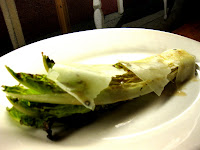 (Lattuga Romana alla Griglia). Once in a while we encounter a dish that surprises, even though the ingredients are totally familiar. That was definitely the case with the grilled romaine. Served warm and topped with Il Fornaio's creamy house dressing and a thin slice of softened pecorino pepato (whole peppercorns are imbeded in the cheese), the lightly caramelized romaine had more similarities to fennel than it did to the overly familiar lettuce we have in salads.
The Whole Wheat Ravioli (Mezzelune Integrali) was also unexpectedly good. Too many times we've tried to eat healthily and ordered a whole wheat pasta only to be disappointed with textures and 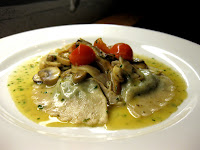 flavors that resembled cardboard. Not so the ravioli filled with greens (Swiss chard and Spinach) and cheeses (ricotta and pecorino) and topped with mushrooms and cherry tomatoes.
Even though Michelle wouldn't have dessert, she indulged me and watched as I ate the Kahlua and Coffee Mouse (Crema al Caffe' e Sambuca). The dessert was presented with extra long spoons which struck me as an 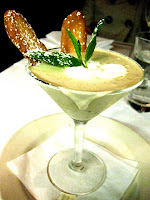 affectation, at least until I started eating and discovered that buried in the delicious mouse were precious treats. Cubes of sambuca-soaked sponge cake and coffee beans coated in dark chocolate were lying in wait to be discovered by the deep-diving, adventurous spoon-wielding-diner.
With so many wonderful dishes and several we wanted to try like the Roasted Salmon with Asparagus, Artichokes, and Capers (Salmone Ostia Antica) and the Risotto with Prawns and Monkfish (Risotto Antico Impero), we decided the best way to celebrate our love for each other was to come back to Il Fornaio and do it all again.
For more posts about Il Fornaio's Festa Regionale check out:
Grilled Vegetable Couscous Salad
A Tasting at Il Fornaio, Santa Monica--Trentino-Alto Adige
A Trip to Italy is Just Around the Corner at Il Fornaio--Calabria
Il Fornaio Heads South to Campania for May's Regionale
Il Fornaio Heads North to Lombardia
The Friuli-Venezia Giulia Comes to Il Fornaio
at February 13, 2010 No comments: