Anyone who lives in Los Angeles knows this is a great city to enjoy ethnic food. It is easy to eat affordably priced meals at any number of national and regional restaurants including those that serve Chinese, Japanese, Mexican, Brazilian, Thai, Jewish, Korean, Vietnamese, Armenian, Persian, Peruvian, Guatemalan, Ethiopian and Indian dishes.

Living near the beach, I don't come into town as often as I would like. To meet a friend close to where he lives meant we needed to find a restaurant near the 10 Freeway at the Crenshaw Boulevard exit. 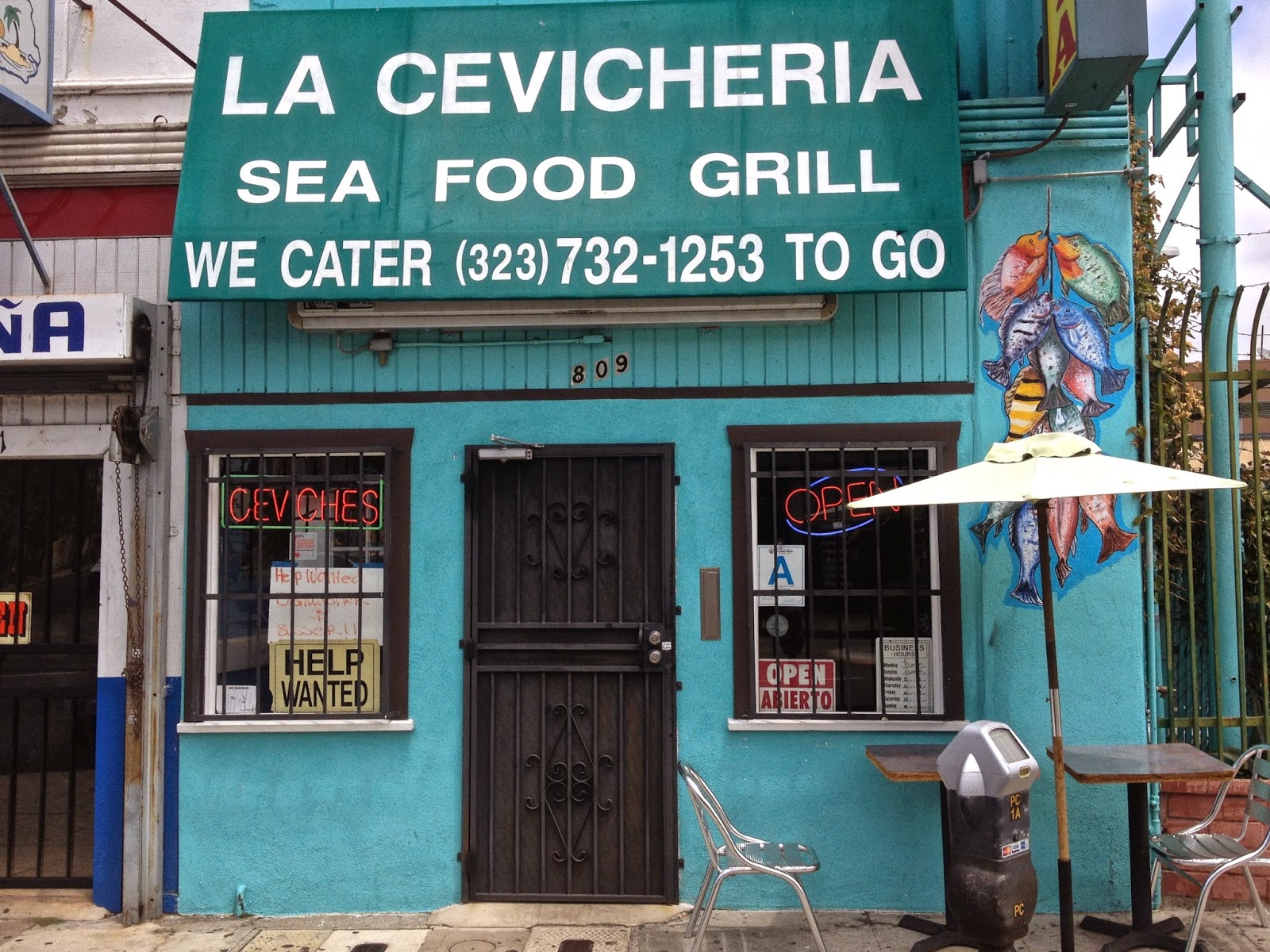 As I parked in front of the restaurant, my friend called to say he would be late. A car issue, easily solved in ten to fifteen minutes. Ok, no problem. That gave me time to explore the area. 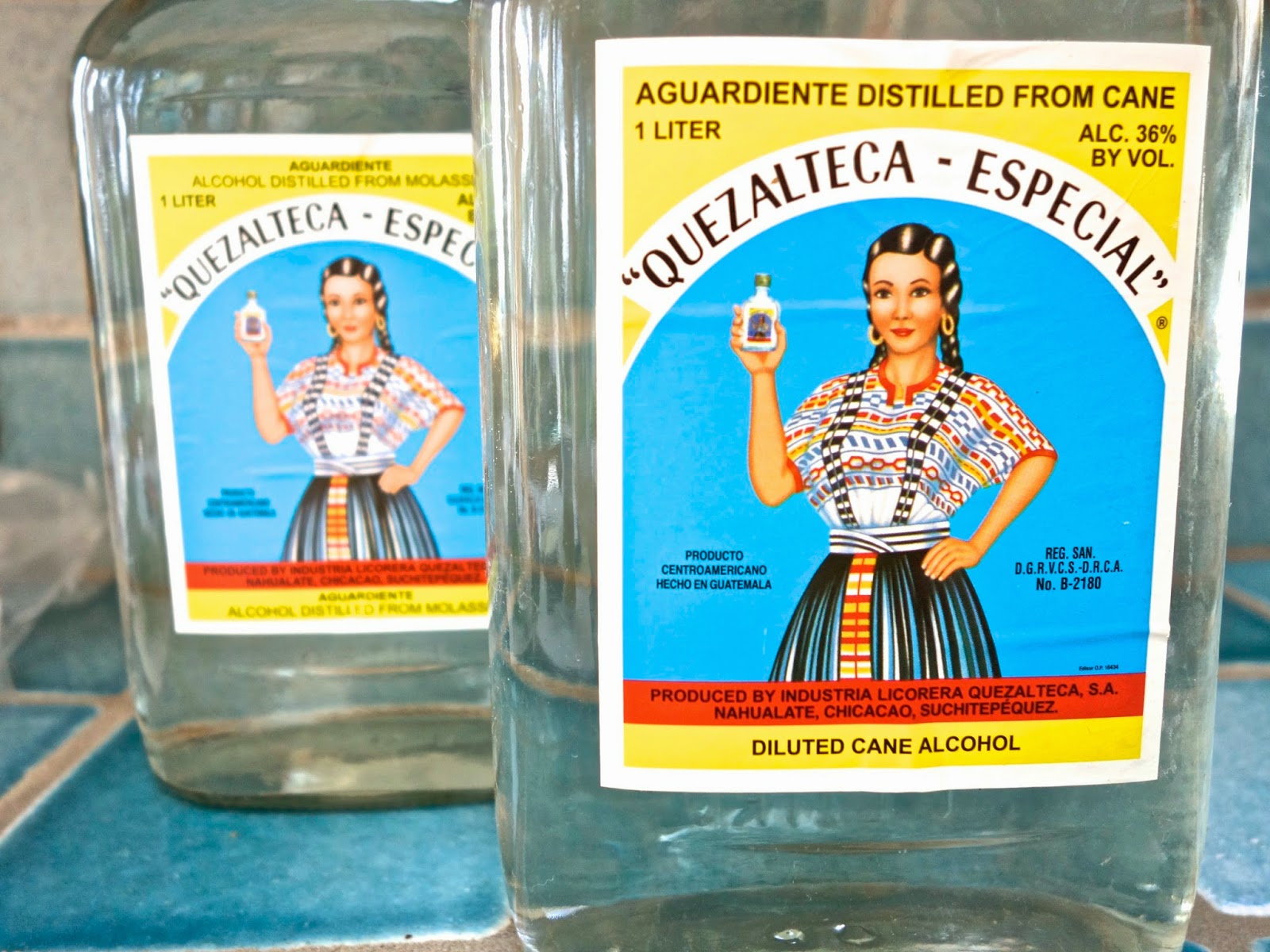 Golden Farms stopped selling the rum last year. Jay's Market carries it. Not knowing when I would be back in the area, I bought two bottles. 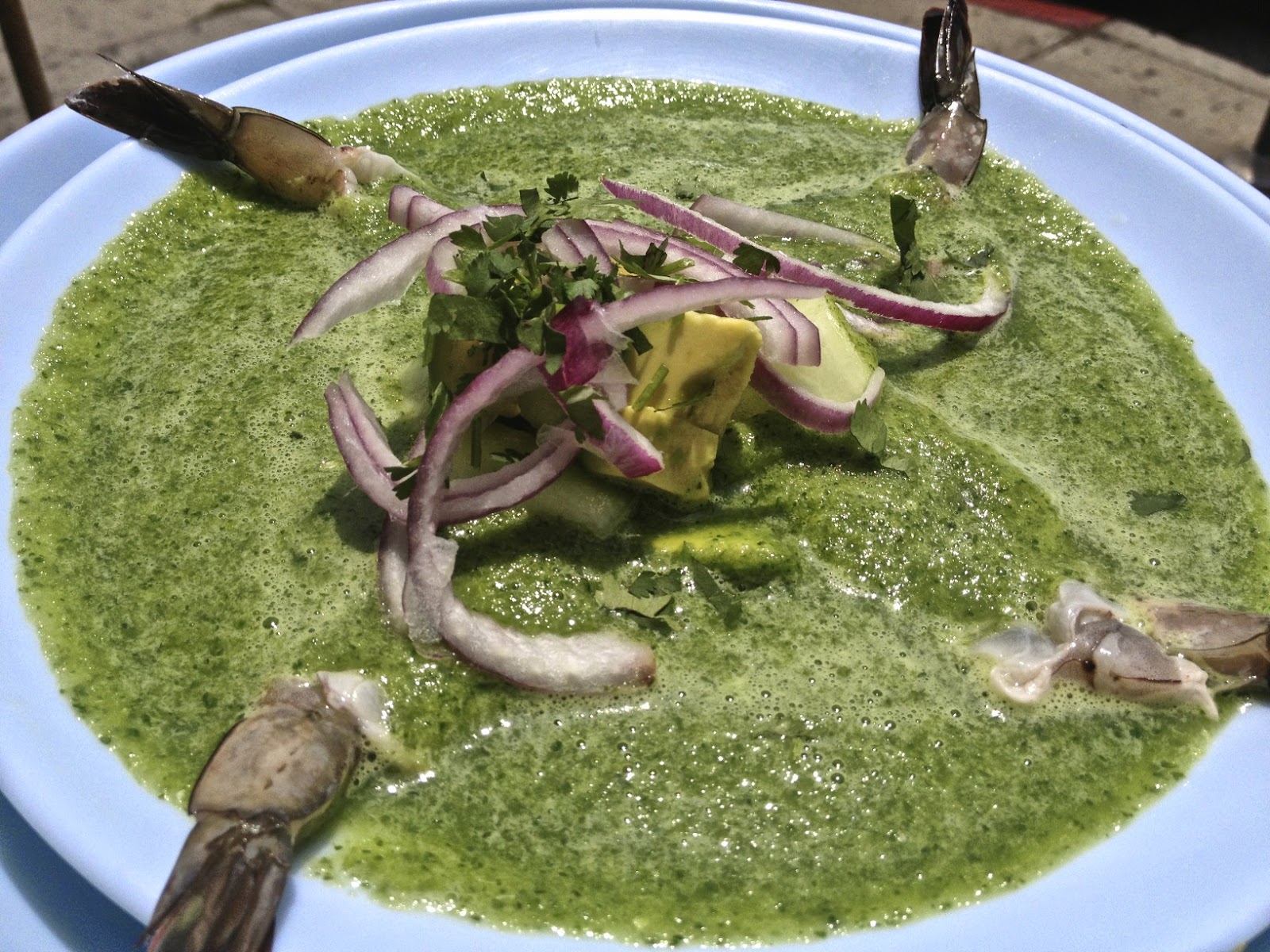 Back to La Cevicheria.

Ethnic restaurants in LA are often family run and draw heavily on the home cooking taught by one generation to the next. Serving the local community, La Cevicheria reached a wider audience when the restaurant was reviewed positively by Jonathan Gold, LA's premier ethnic restaurant critic, and included by S. Irene Virbila in her ceviche round-up.

Waiting for my friend, I sat down at one of the two small sidewalk tables to read the newspaper. Enjoying a quiet moment, even though a large truck was idling in front while the driver made a delivery, a man in a black t-shirt stuck his head out of the restaurant's front door to ask, "May I help you?" "Just waiting for my friend," I explained. He invited me inside because sitting next to an idling truck wasn't all that pleasant.

At that moment, my friend arrived, so inside we went and found a table in the middle of the restaurant. The man in the black t-shirt handed us menus and introduced himself as Julio Orellana.  He waved his arm in the air, gesturing at Jonathan Gold's review on the wall. He was happy to meet us, he said, although the person we really should meet was chef Carolina Orellana, his wife, but she was not there.

A gregarious person, Orellana gave us a thumbnail description of the restaurant. The recipes came from Guatemala. Carolina made everything in the kitchen. Ok. there were a few hot sauces in bottles because people fancied them, but everything else was made in the kitchen, the way his wife cooked for the family at home.

We read the menu. Hip hop music played overhead. More people came into the restaurant. The truck deliveryman came inside and found an empty table. A woman, her mom and a friend sat across from us. She ordered and when her food came, she told us about the dishes.

La Cevicheria is the kind of place where people start conversations with strangers. Everyone wants to talk about their favorite dishes. 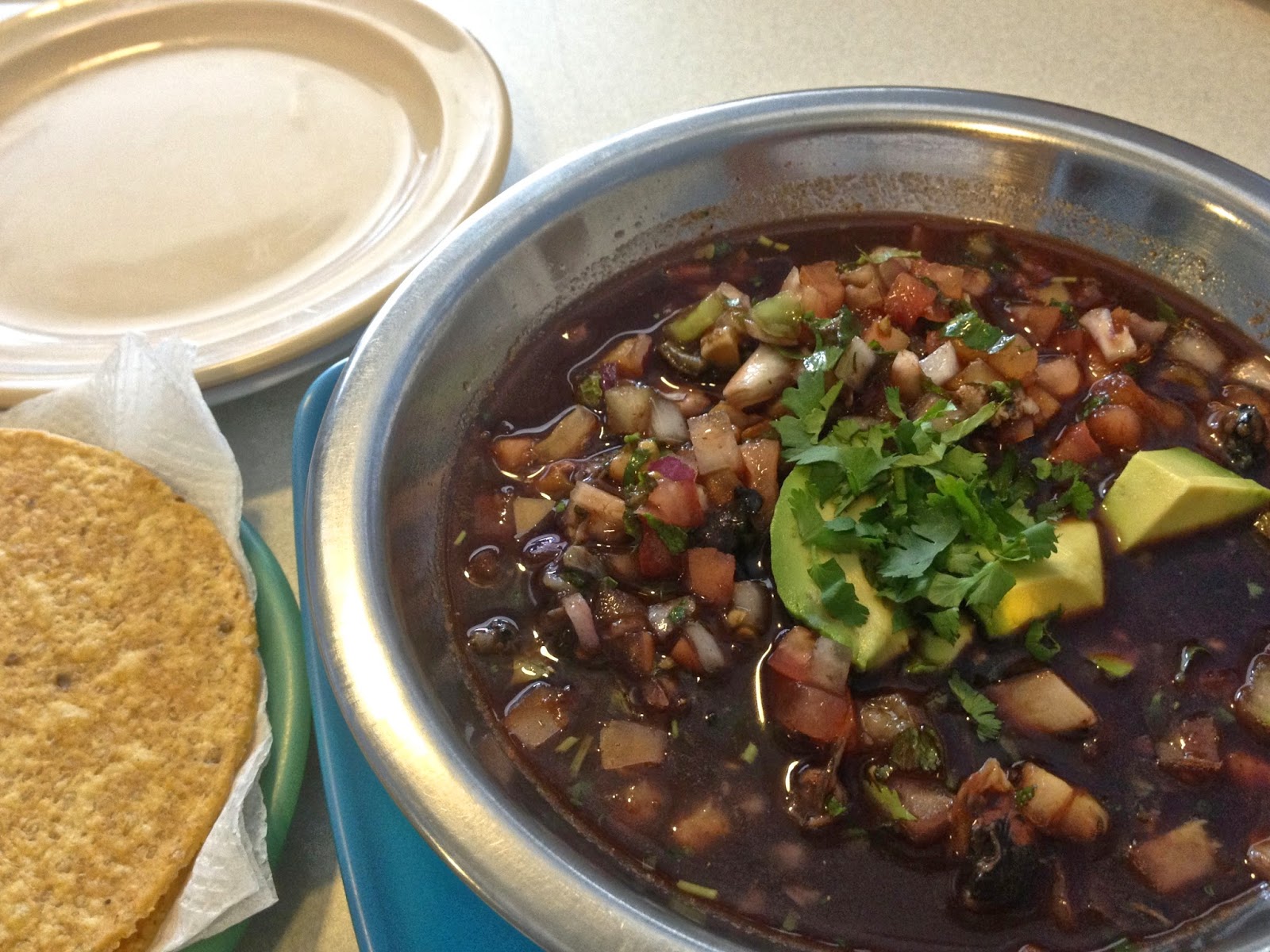 She also told us that because La Cevicheria doesn't have a liquor license, we could bring our own beer in brown paper bags. But, no bottles, only beer in cans.

We shared a plate of Aguachiles, a ceviche appetizer with 4 jumbo raw shrimp, deveined, the shells peeled back to the tails. The shrimp were placed in a thick, spicy-hot green sauce, flavored with pulverized jalapeños, lime, cilantro, onions and garlic. The translucent shrimp quickly turned pink under the withering glare of the jalapeño-lime marinade. The heat surrounded the sweet shrimp and coated the inside of my mouth. The dish satisfied on so many levels.

We had the Campechana. Arriving in an unglamorous, large metal bowl, bits of shrimp, clams, octopus and abalone float in an ink-dark liquid. Lacking the visual appeal of the Aguachiles, the Campechana cocktail needs to be eaten to be appreciated. Cilantro, avocado and peeled cucumbers brighten the seriousness of the ceviche. Eaten on pieces of crisp corn tortilla, each mouthful becomes an experience of contrasting textures and flavors--crisp, soft, chewy, sweet, acidic. After each bite, mouth empty, a quiet heat envelopes your palate like the sweet remembrance that comes when a lover leaves and you yearn with anticipation for her return. 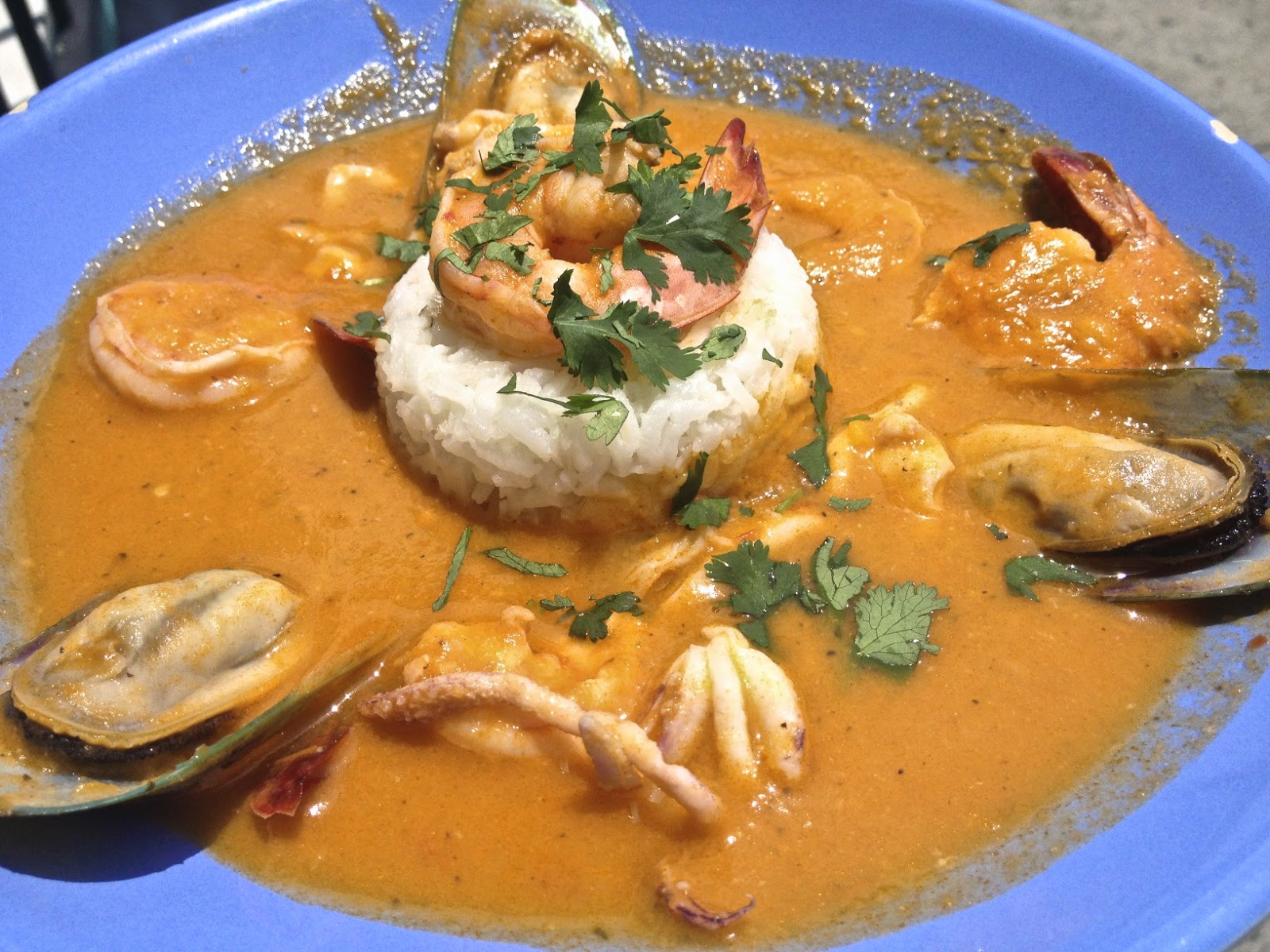 As a contrast to the two first dishes, the Mariscadas, a seafood stew is an intermezzo of quiet. Served in a mild tomato based sauce with steamed white rice ($15), the dish is visually elegant and easy on the palate, as if to say, Guatemalan cuisine isn't all about heat. Mariscadas comforts where its companions sought to excite and challenge.

Providing a through line for all the dishes, we had glasses of freshly squeezed, tart-sweet limeade.

After all the heat, we needed something sweet. My friend remembered Mateo's, an ice cream store on Pico, just west of Crenshaw.

As we walked to our cars, we passed Restaurante Puerto La Union (3811 W. Pico Boulevard, Los Angeles 90019, 323/373-0429). A quick look at the menu with its list of affordable, large plates of familiar Salvadorian dishes and we knew we would come back. Maybe next time we would have appetizers at La Cevicheria (surf) and an entrée at Restaurante Puerto La Union (turf). 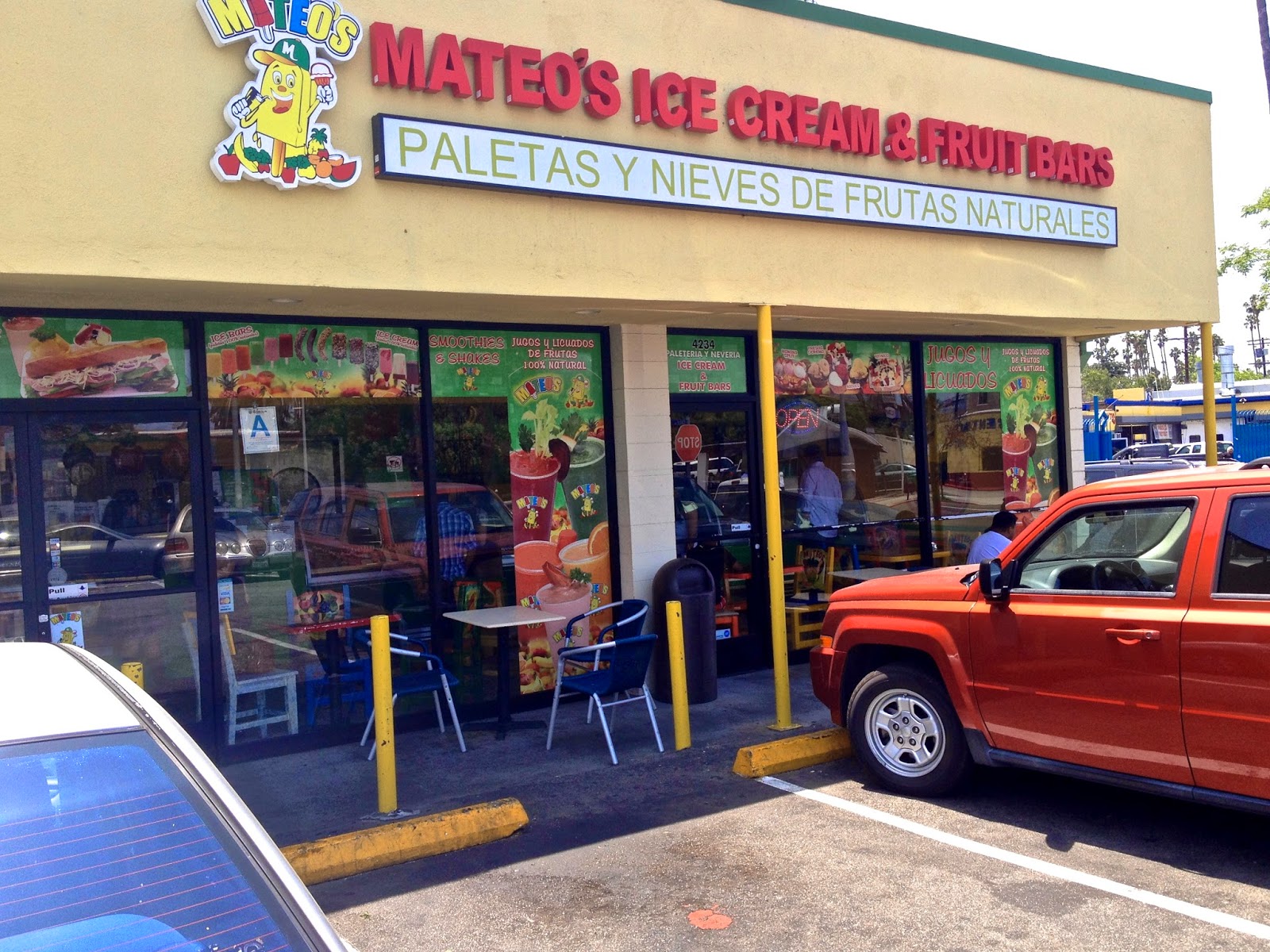 The ice creams and paletas (fruit bars with and without milk) are made in the Culver City store. All use fresh ingredients. When paletas are made right, they are sweet but not too sweet. They are all about flavor. 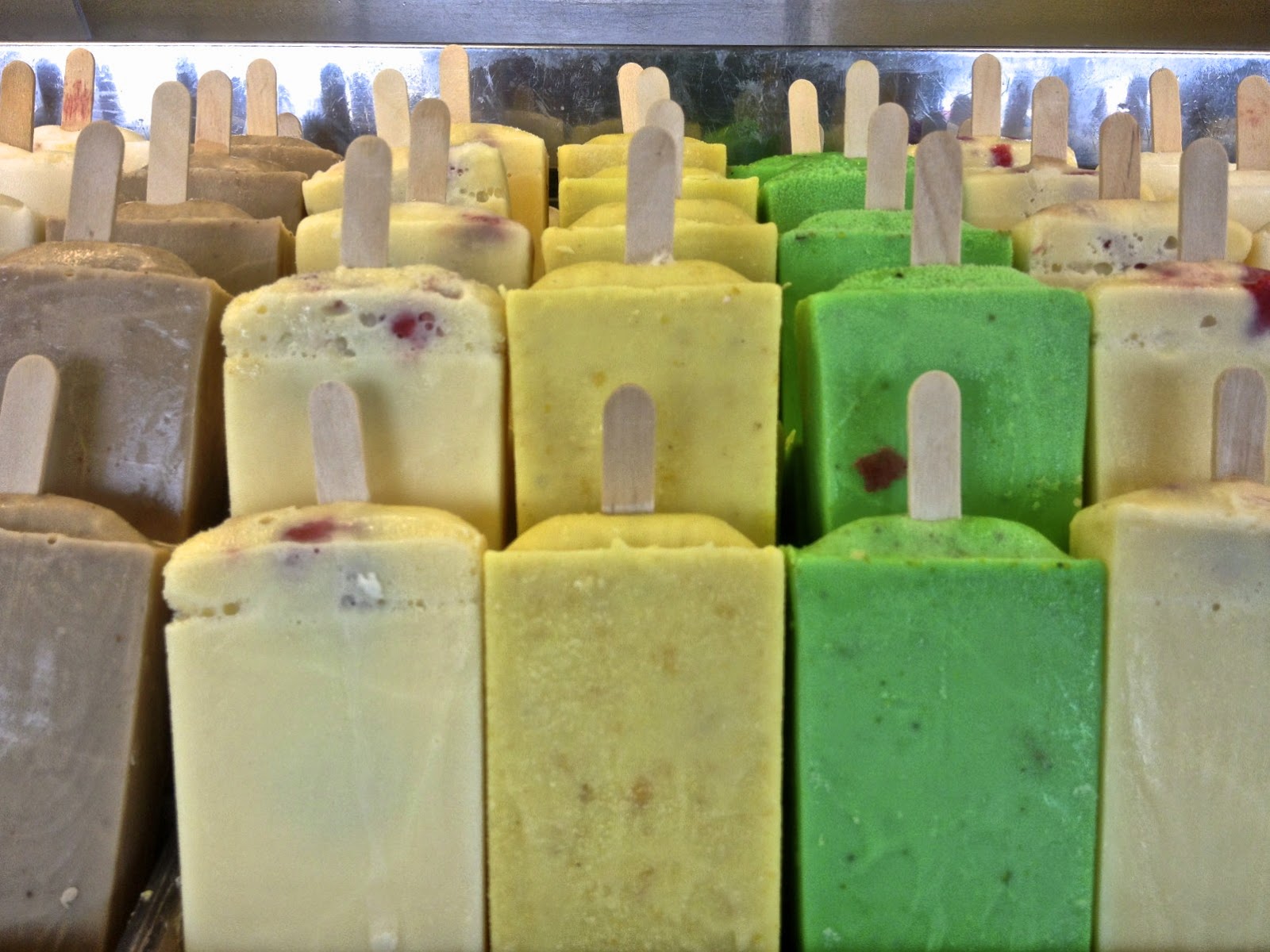 Mateo's is rightly proud of their ice creams. 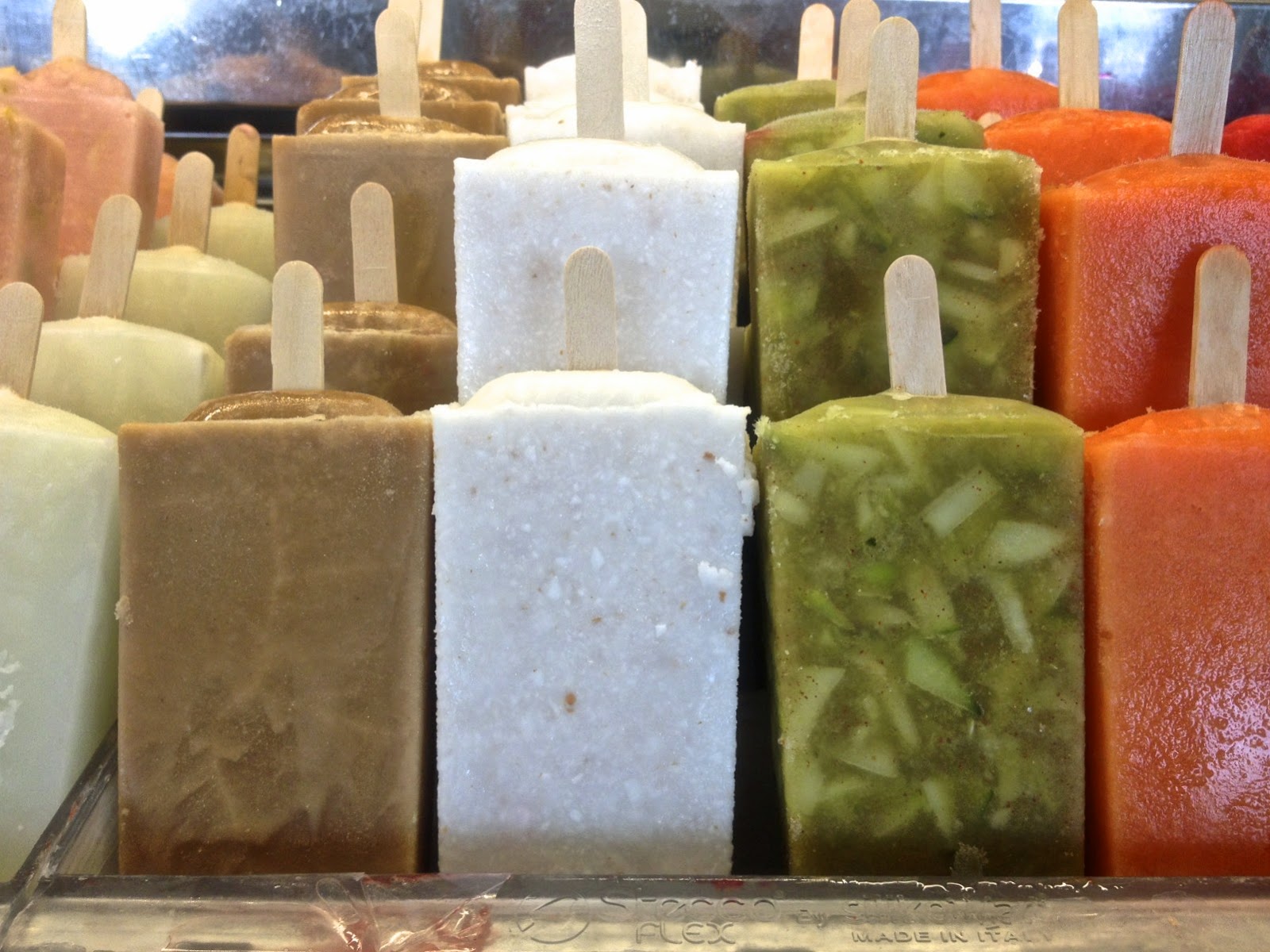 Besides ice cream scoops, fruit bars (paletas), smoothies, milkshakes and freshly squeezed juices, Mateo's also has a short menu of sandwiches so if you are hungry you can eat before you feast on ice cream treats. 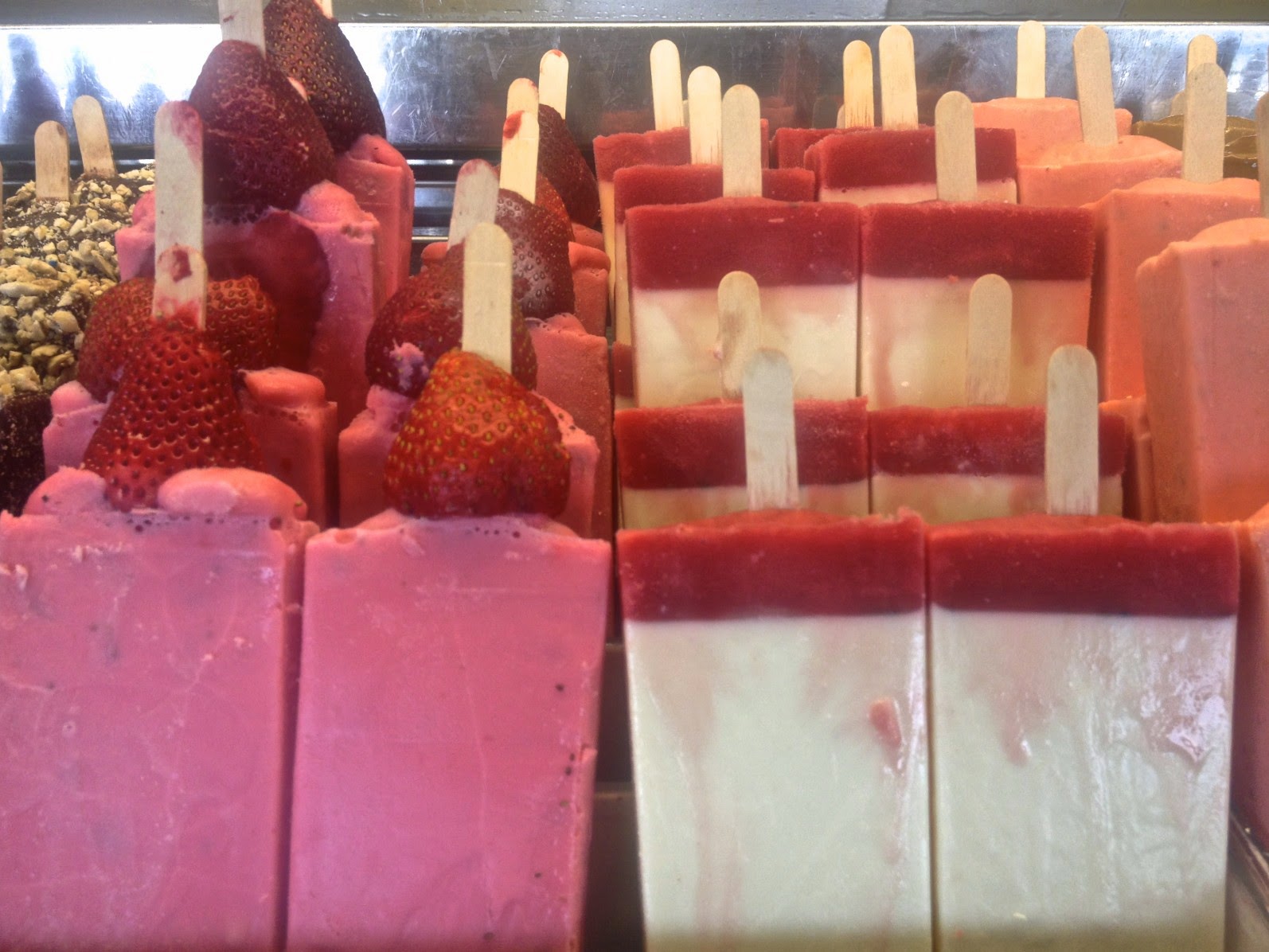 I had a vanilla paleta with strawberries. Delicious. My friend had scoops of smoked milk and caramel. I wanted to try the coconut, pineapple and mango with chile paletas but after the lunch at La Cevicheria, I was too full.