What comes to mind when someone mentions Houston? Don't think about it. Respond

emotionally. Probably you said something that included "Texas, oil, Gulf Coast hurricanes, cowboys, barbecue, and Tex-Mex". Maybe you also remembered that Houston is home to an important complex of medical centers and that NASA's Johnson Space Center is nearby.

Houston has come of age. Serving up plenty of hamburgers, barbecue, enchiladas, and carnitas, Houston's food scene stays connected with its Western traditions. But the food landscape now includes a range of restaurants serving the cuisines of Europe, the Middle East and Asia. There are plenty of upscale restaurants and many affordable, neighborhood joints.

On a recent trip to Houston I took an eating tour of the town and I have some recommendations to pass along.

Chef Michael Kramer demonstrates his love of farmers' markets produce and local purveyors in a menu he describes as "Modern American". The menu changes frequently, the better to highlight what's fresh and seasonal. Besides the a la carte regular menu, he offers a nightly tasting.

For our tasting we had several of what are already regarded as "classics" at the restaurant. A 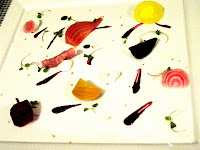 demitasse cup of richly flavored Mushroom Soup "Cappucino" topped with truffle foam and porcini powder. In his Patchwork of Baby Beets--a witty riff on the paintings of Joan Miro-- he thinly slices and quarters half a dozen beet varieties and pairs them with locally made Chessy Girl goat cheese and what the chef calls a beet caramel reduction of beet juice and seasoned balsamic vinegar.

Of the appetizer courses, the Potato Gnocchi was the perfect comfort food, the soft pillows--and although it's a cliche to describe gnocchi "pillows" that's exactly what these were, light, oblong, airy pillows--floated in a chanterelle-prosciutto broth, sharing the bottom of the sculpted bowl with perfectly cooked Brussels sprouts. 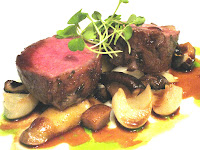 The entrees included North Carolina Black Sea Bass with braised artichokes and hedgehog mushrooms. We also had the Honey Lacquered Duck Breast with competing sweet (pear mostarda) and peppery (black pepper gastrique) sauces. The last entree was Chef Kramer's signature dish, a Herb Marinated Rack of Lamb. The meat was deliciously tender, having been finished, sous vide, in a garlic and thyme marinade.

Desserts favored the chocoholic with white and dark chocolate in many forms: warm chocolat

Happily Houston boasts a well-developed Vietnamese food scene, the result of the influx of Vietnamese refuges--the "boat people"--in the mid-1970s. One such place is a standout: the family-run, very affordable Huynh Restaurant (912 St. Emanuel, Houston, Texas 77003; 713/224-8694) in the revitalized Eado (East of Downtown). 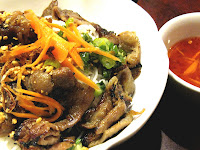 With her mother, Van Bui, and brother, Binh Dang, in the kitchen, and her younger sister Cindy serving out front, Anny Dang recently re-opened the restaurant in the new location. What's on the menu is traditional Vietnamese home-cooking, the food that mom Van Bui made her family when they lived in Quang Ngai two hours south of Da Nang. 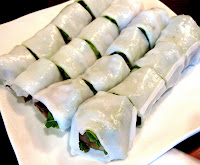 Biet), chicken noodle soup (Pho Ga), bbq pork on rice (Com Chien Xa Xiu), chargrilled shrimp or chicken on cold vermicelli noodles with julienned vegetables (Bun Tom Nuong or Ga), and grilled pork chops on rice (Com Tam Thit Nuong Bi Cha). They are all delicious because the freshest ingredients are used and you can tell a caring hand has prepared the food. 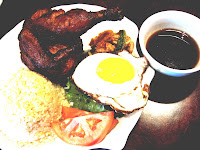 sweet pork inside. Duck (Goi Vit) mixed with shreds of fresh vegetables and herbs, topped with crispy, fried onion rings. A spicy dish (Xao Xa Ot) that can be made with tofu, shrimp, or chicken; we had the shrimp, stir-fried with a sauce of hot chili paste and lemon grass. And half a fried chicken wittily called the Phoenix (Com Phuong Hoang), because it's cooked twice--first roasted, then fried--served with a mound of steamed rice and a side of Korean kimchi and--most amazingly--topped with a farm fresh sunny side up fried egg. When the egg is cut open, the yolk runs down the chicken and onto the rice. 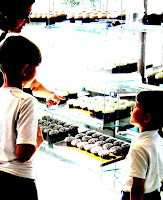 As we were driving out of town, we stopped to pick up some treats for the road at Crave (1151-06 Uptown Park Boulevard, Houston, Texas 77056; 713/622-7283), an upscale cupcake store tucked into the Uptown Park Mall just off Highway 610. Ever since the Magnolia Bakery in New York popularized cupcakes with inventive flavors and adult prices ($3.25), cupcakes have had a resurgence across the country.

Crave is the latest example of this excellent trend where traditional recipes are improved by using high quality ingredients, like 85% butterfat butter, imported French sprinkles, and fresh fruit. 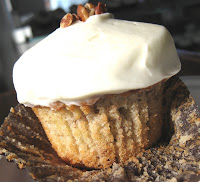 The Hummingbird has a classic Southern mix of pineapple, pecans, and bananas with a cream cheese frosting. Fresh strawberries are added to the frosting in the Strawberry cupcake, which probably accounts for it being a best seller. There's even a cupcake riff on the Hostess Ding Dong. The Chocolate and Creme cupcake is made with imported chocolate, filled with marshmallow cream, and topped with dark chocolate ganache. This is definitely not the Ding Dong of your grammar school days.

When I visited Houston 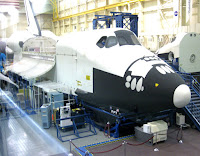 several years ago to tour the Johnson Space Center, I thoroughly enjoyed myself because I am a huge fan of the space program. In those days the most you could hope for by way of a meal was good barbecue and authentic Mexican food. That's still true, but now Houston has a whole lot more to offer the hungry traveler. 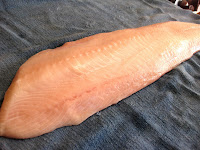 quickly and has deeply satisfying flavors. Popularized by the Iron Chef, Masaharu Morimoto, his complicated recipe can be simplified with excellent results.

The fish can be served with steamed rice and simply braised or sauteed vegetables like spinach with garlic and shiitake mushrooms. 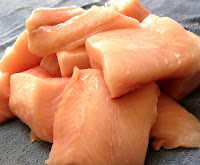 The ginger-soy poaching liquid can be reused several times.

After the fish has been cooked and all solids removed, the liquid can be kept in the freezer in an air-tight container for several months.

When you want a quick meal, defrost the poaching liquid, simmer, add the black cod pieces, cover, and you'll have a meal on the table in 10 minutes. 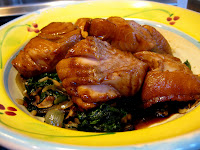 Carefully inspect the fillets for bones. There will probably be a row in the middle of th 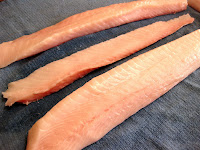 Using a sharp knife, slice along the bones and remove in a long strip. Don't throw out the strip because it can be marinated in olive oil, sea salt, and pepper and roasted in the oven or grilled on a bbq. Have the bones as a cook's treat.

Cut the fillets into rectangles 1 1/2" x 2" for easier handling.

In an uncovered large pan or dutch oven, create the poaching liquid by simmering together the sugar, soy sauce, mirin, sake, and ginger for 10 minutes. Add the black cod pieces, cover, and simmer 5 minute 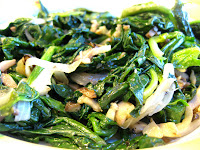 Remove the cod with a slotted spoon and set aside. Reserve 2 cups of the poaching liquid, straining and pouring the remainder into a sealed container and freeze.

Return the cod and 2 cups of poaching liquid to the pan, reduce and thicken over high heat, spooning the thickening sauce over the cod, about 5 minutes.

Serve immediately with steamed rice or sauteed garlic spinach with shiitake mushrooms.
at July 20, 2009 No comments: