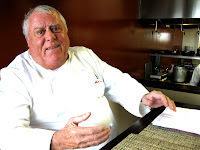 was uncertain. They had a grand ambition to open a world-class restaurant specializing in high-quality, classic French cuisine in a country that famously preferred fish and chips.
Le Gavroche was instantly recognized for the quality of its preparation and attention to detail and began a revolution in English cooking.
Chef Albert Roux recently turned his attention to America. Did he set up camp in Miami, Las Vegas, New York, Chicago? None of the above. 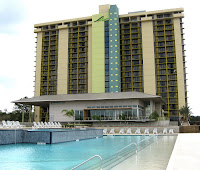 Chef Roux opened Chez Roux on the grounds of La Torretta del Lago Resort and Spa, 600 La Torretta Blvd., Montgomery, Texas 77356 (936/448-4400), on the edge of Lake Conroe, an hour north of Houston. He chose the location because of his long friendship with the owner Ronnie Ben-Zur.
Chez Roux specializes in a cuisine Chef Roux developed with his son, Michel Jr., at Le Gavroche. Using sauces made with jus and reductions, the menu relies entirely on market-fresh, organic, hormone-free ingredients.

The elegantly intimate dining room seats 65, with a chef's table--a banquette on the mezzanine overlooking the kitchen--that seats an additional 10.
Meals can be ordered either a la carte or prix fixe. There is dinner service Tuesday-Saturday and brunch on Sunday. Lunch is available for special parties.
On assignment for Peter Greenberg, I interviewed Albert Roux in the kitchen of Chez Roux in March.
When you began your career, you were famous for introducing classic French cuisine to England and mentoring well-known chefs like Marco Pierre White and Gordon Ramsey. How has your cooking changed over the years?
What I am doing here is very much the way my son, Michel, cooks at Le Gavroche today. My first cookery book, La Nouvelle Cuisine Classique, was very much oriented to Escoffier. There was no roux, no flour. Nevertheless, it was rich because we used quite a lot of butter and cream. Now we have entered a new phase, using pure jus and reductions so the natural flavors predominate.
You've said that you want to use all organic, farm-fresh ingredients at Chez Roux.
Yes, absolutely. If you are a great chef but you do not have good raw ingredients, you are nothing. In the U.S. you can move food around quickly. For example in London if I buy foie gras from France, it's only seven hundred miles, but it will take two days to reach me. Here, I order salmon from Alaska and the next day it's in my kitchen. What is available in America is fantastic. I went to Pike's Place Market in Seattle. They had to drag me out of there. We were leaving the next day and I smuggled through customs two big bags of fruit and vegetables.
Everything had another dimension. Peaches, beautiful peaches, white and yellow. Tomatoes. Cherries, so heavenly perfumed. And the b 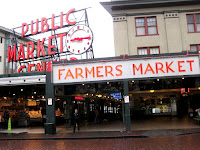 ig salmon, aye ya ya. The Copper River salmon is the best in the world. In Texas there are very good food purveyors. I went to the Houston farmers' market. It was a revelation to see the army of believers there. Those people are never going to make a fortune, but they are very very proud of their produce, as they should be.
You have the best beef in the world. The veal also is absolutely first rate. 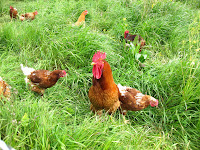 We've found some beautiful duck, squad, and quail. The game here is fantastic.
Chickens, that's another matter. The quality of your chickens is bloody awful. But there are some that are good, the happy chickens. They haven't been in a cage. They have not been fed with hormones. They've been allowed to scratch in the earth and find the little worm and they taste infinitely better.
What do you import from Europe? Some cheeses come from Europe. 30% of the wine list. But my aim is to use 95% of the product from the U.S.A.
After all these years, do you still enjoy cooking?
Absolutely.
When you eat at home, what do you cook?
It's very very simple food. On a typical weekend in the country, Friday night we arrive in mid-afternoon. We'll have a steak, just grilled, sauteed potatoes, a little Bearnaise sauce, a nice salad and fromage frais, mixed with cream and herbs. Saturday morning will be breakfast at about eleven o'clock with a glass of champagne, scrambled or fried eggs with baked beans--I love baked beans--it has to be Heinz.
Heinz Pork and Beans?
Oh yes, that's the best thing in the world. We'll also have nice crispy bacon, American style. Then a grilled tomato with a bit of olive oil. And that's it.

Dinner would be focused on the wine. I have an excellent cellar. On Saturday afternoon I'll look around and pick out a bottle. With a top wine you don't want a rich cream sauce, just a simple little jus. During the first four months of the lamb season, a leg of lamb or rack of lamb roasted, new vegetables from the garden--I have a beautiful garden--a bit of cheese and a bottle of wine and that's it.
I've been told the kitchen at Chez Roux doesn't use conventional gas stoves.
That's correct. The kitchen is green. We are ruining the world and it doesn't even belong to us. It belongs to our grandchildren and the children of our grandchildren and at the rate we're polluting it, there will be no world to pass along.
Do you notice that we're sitting in the kitchen and it isn't hot? The prep chefs are not sweating or perspiring. Why? No excess heat because the stoves use induction heat.
As soon as you lift the saucepan, the heat stops. 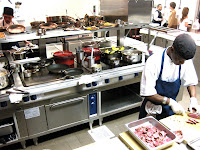 In a conventional kitchen, the first thing the chef does is he lights all the burners, ovens, and the salamander, even the ones he doesn't need right away. And they will stay on until the kitchen closes for the night. This is a bad habit.
Why waste the energy and throw the money away? We save money on the consumption of energy and also on the retention of staff. Employees stay longer because if you work in a very pleasant environment, they tend to stay longer and that saves money as well.
How much time will you spend in Texas? I am due to come four times a year for two weeks. But my feeling is, I'll be here more often. If I get too depressed by the weather in the UK, I'll jump on a plane and spend a couple of weeks in Texas.
As a chef, what have you learned about America?
Never deny yourself. The blessing of America is it is a continent with all the seasons, with many people who care about food. That makes it such an enjoyable experience to cook here.

A Feast Fit for a Son -- Pasta with Clams, Corn, and Smoked Sausage

Recently our older son, Frank, stopped by for lunch. Now that he has moved across town and works long hours, we don't see him often enough. It was great to share a meal and catch 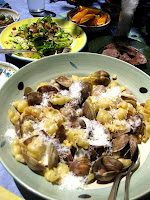 The day was sunny and warm so we had lunch on the deck. Everything was quick and easy-to-make: a big bowl of cracked green olives, romaine lettuce with avocado and homemade croutons, grilled fillet mignon, and dessert of ice cold Valencia orange slices. The main course was something special: pasta, fresh clams, corn, and smoked sausage in a butter sauce.

Finding fresh clams isn't all that easy. Luckily for us Carlsbad Aquafarm sells their shellfish at the Santa Monica Farmers' Market Wednesdays and Saturdays. The corn came from a local farmer at the Palisades Farmer's Market. The smoked sausage was a treat picked up at a Russian market in Brooklyn's Brighton Beach.

Reserve all the clam liquid, between 1-2 cups.

Cook the pasta in salted water until al dente, about 10 minutes. Drain the pasta. Save 1 cup of the pasta water. Return the cooked pasta to the pot, drizzle with olive oil, toss and set aside.

In a large frying or chef's pan, saute the sausage, corn, garlic, onions, and parsley in olive oil, seasoned with black pepper until lightly browned. Use 1/2 cup of the pasta water to deglaze the pan. Add the sweet butter and clam broth, stir, and simmer for 5 minutes.

Taste and adjust the seasoning with sea salt and pepper. If more liquid is needed, use the remaining pasta water.