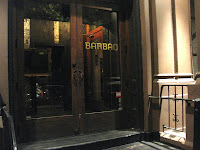 In New York for a brief visit, my wife and I wanted to celebrate our 19th wedding anniversary with a special dinner. After a beautiful day walking around the city, we decided to find a restaurant near where we were staying at 70th and Amsterdam. For our anniversary dinner, we wanted a restaurant where we could talk and hold hands. And we wanted a meal prepared by a chef who cared about making interesting food, but we didn't want to spend a fortune.

The New York Times said a new restaurant was opening nearby that sounded interesting,

so we called. On the phone the maitre d' described the menu at Bar Bao , 100 West 82nd Street (between Columbus and Amsterdam, 212/501-0776) as a "modern take on Vietnamese food." The restaurant was opening that night and luckily a table was available.

When we arrived we were greeted warmly. That friendliness continued throughout the evening. Our waiter, Matt,

accommodating both Michelle's desire to be meat free and my own unrestricted eating, suggested the Vermicelli Noodles and he would bring the pork belly on the side. Rounding out the meal, we decided on the Vegetable Summer Rolls, Sizzling Cuttlefish, Bean Curd Glazed Black Cod, and Asian Eggplant. 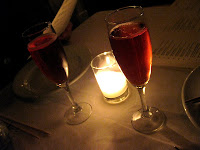 At the beginning of the meal, we were served complimentary glasses of a sparkling Rose to help us 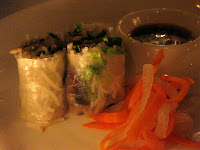 celebrate our anniversary and accompany the Summer Rolls. Coming from Los Angeles, I developed my love of Vietnamese food eating in Little Saigon where I have my favorites (Ha Noi and Dong Khanh). The Summer Rolls at Bar Bao were clearly better than any I'd eaten before. Even the rice paper was delicious.

The cuttlefish was grilled perfectly, the meat tender with the 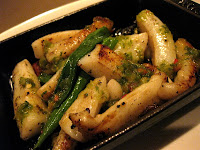 amount of heat from the Salsa Verde. The eggplant with scallions had subtle layers of flavors. The vermicelli, dressed in the sweet-heat of a chili sauce, provided a balance to the cuttlefish and eggplant. And I had the added bonus of the pork belly slices, which were the best I have ever eaten.

The signature quality to the cooking at Bar Bao is the way sweet, grilled, heat, and savory flavors combine so harmoniously in each dish. The proportions of one to the other change from dish to dish, but they are always there, informing each bite. These are dishes that are about 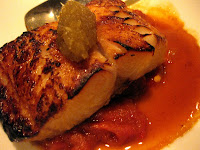 balance and surprise all at the same time.

The Bean Curd Glazed Black Cod proved the point. The fish was cooked perfectly, moist and flaky, its flavors complimented by a gingery tasting grated preserved lemon on top and the sweet-heat of the curried red pepper below.

For dessert we were offered an off-the-menu special: Kabocha-Squash Flan. The layers of flavor and texture were extraordinary. Amazingly the flan had an icy cold center, while its creaminess was contrasted by the gingko beans, lotus seeds, and candied Chinese dates. And floating like a cloud above it all was a coconut emulsion.

This is just what I expect from a good New York restaurant: using the freshest ingredients and letting a talented chef perfect and innovate a regional cuisine he or she is passionate about. Michael Bao Huynh, Bar Bao's chef, has elevated Vietnamese cooking to a new high while still preserving the flavors and techniques that are unique to Vietnam. Main Street Restaurant Partners (MSRP), the owners of Bar Bao have continued the winning Asian-Fusion formula that worked so well at Rain.

At the end of the meal, our only regret was that we were leaving town in a few days and we might not have time to visit the restaurant again.
at October 25, 2008 No comments: 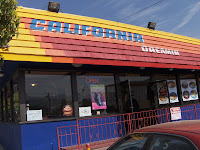 g near the beach in Pacific Palisades, I have to drive a long way to visit one of my favorite places to eat. An Armenian restaurant, California Dreamin (6424 San Fernando Road, Glendale, CA 91201) is located in Glendale some 30 miles inland. Happily a block away is another favorite, Golden Farms (6501 San Fernando Road, Glendale, CA 91202), also Armenian, a supermarket famous for its low prices, fresh produce, specialty cuts of meats, and enormous liquor department.
Reflecting the diversity of the neighborhood, California Dreamin is an all-purpose coffee shop serving American, Mexican, Japanese, Mi 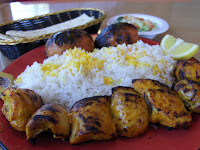 ddle Eastern, and Armenian food. I imagine it was once a hamburger joint or the kind of coffee shop that served 99¢ breakfasts.

For years I drove by without stopping. Now I look for excuses to swing by and have lunch.

I'm certain all their food is good but I'm a creature of habit so I always order #8 the Chicken Breast Kabob. The perfectly cooked chicken is tender and juicy. Served with basmati rice, a fire-roasted whole tomato and a pepper, toasted pieces of lavash, and a small bowl of cucumber salad, there's always more than I can eat. Invariably I bring home a to-go box for a late night snack. And they make a cup of thick Armenian coffee that packs more flavor than any espresso.

At some point, I realized I came as much for the cucumber-tomato salad (Salad-e Shirazi) as any 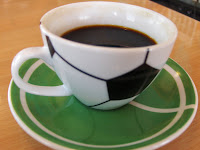 thing else. The combination of flavors is so deceptively simple. Making the salad at home I shop at the local farmers' markets to get the freshest ingredients. Delicious by itself, the salad is a perfect side dish for grilled meats.

I tried using regular cucumbers but they're too watery. For me the salad only w 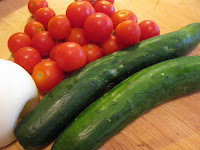 orks with Iranian or Persian cucumbers because they have more density and fewer seeds. The traditional version of the salad calls for the addition of an acid, either vinegar or citrus juice (lemon or lime). Personally, I like it without either, but all versions are worth trying. 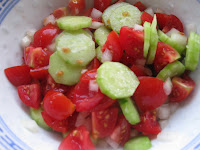 Mix together and dress with olive oil. Season to taste with sea salt and black pepper.

Add a squeeze of fresh lemon or lime juice, or 1 teaspoon vinegar.