If you can't get your kids to eat vegetables, try caramelizing them to bring out their natural sweetness. It's as easy as tossing them 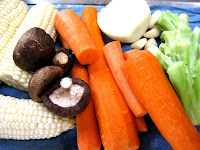 in olive oil seasoned with sea salt and pepper, sauteing, grilling, or roasting them in the oven.

For a quick, affordable, nutritious meal, add pasta, leave a little broth in the bottom of the bowl, top with grated cheese and they'll come back for seconds.

Saute all the vegetables in 1 tablespoon olive oil until softened. Season with sea salt and pepper to taste. Set aside.

Boil a large pot of water. Add the Kosher salt. Add the pasta. To prevent sticking, stir well throughout the cooking, about 10 minutes. Put a heat-proof cup or a Pyrex measuring cup that can hold 1 1/2 cups into the sink next to the strainer. When you drain the pasta, capture 1 1/2 cups of pasta water. Set aside.

Put the pasta back into the pot. Drizzle the remaining tablespoon of olive oil over the pasta. Toss well. Season with sea salt and pepper. Toss. To keep the pasta warm, lay a piece of aluminum foil over the top of the pot but do not seal. Set aside.

Just before serving, pour the pasta, broth and vegetables into a large bowl. Serve with the grated cheese alongside.
Variations
To add heat, put 1/4 teaspoon of tabasco or a pinch of cayenne when you're sauteing the vegetables.
Add 2 cups sliced cooked chicken breast.
Add 1 cup raw shrimp, washed, deveined, roughly chopped to the vegetables when you add the pasta water.
In addition to the vegetables in the recipe, add others you enjoy, like peppers, asparagus, zucchini, celery, chopped tomatoes, even cooked potatoes.
at January 19, 2010 1 comment:

Sundance and the Sundance Film Festival

To most people the Sundance Film Festival means Park City, Utah. With a broad valley at the 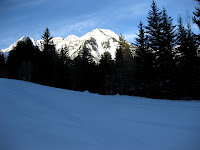 base of the mountains, the city has the look of a classic winter resort, except that during the Festival most people aren't skiing, they're either standing in line outside theaters or inside watching movies.

But the Festival also screens films at its namesake, the Sundance Resort, just 30 minutes away.

If you want to see some of the Festival films in a quieter setting, try seeing them at Sundance. 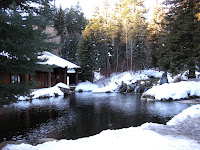 Sundance occupies a narrow canyon with majestic Mt. Timpanogos looking down on the slopes. The crowds of filmgoers stay in Park City so you won't have to stand in line or miss a screening because it's sold out.

After the film you can take a walk outside, enjoying the clear mountain air. To get some exercise, take a break by skiing down the mountain, then, if you're hungry, walk to the Foundry Grill and have a bowl of hot soup and a sandwich. Before you go back inside for another film, take 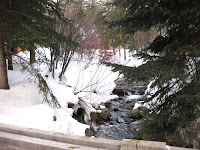 a minute to enjoy the scenery, and, as many people do, stand on the wooden bridge and watch the turbulent stream calm itself in the reflecting pond.

That way you'll get the best of both worlds. 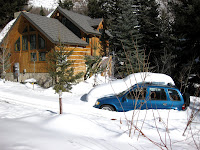 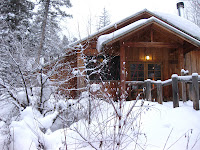 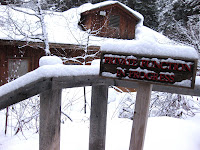