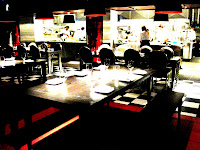 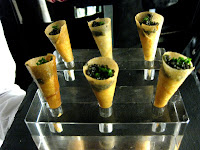 e best hams and cheeses cements his connection to the Spanish tapas bars where working people gather to eat, drink, and talk.

Over several visits to the Bazaar, I enjoyed wildly extravagant treats like h 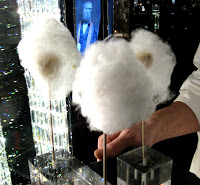 is crispy cones filled with cauliflower cream and topped with American caviar or the whimsical, delicious sticks of foie gras wrapped in cotton candy, but the most memorable dish was something extraordinarily simple: an appetizer of salt crusted potatoes with a cilantro-parsley dip.

José stopped by our table and talked passionately about the dishes he had created for the Bazaar. He said he loved all of his "children" equally but when he talked about his "winkled potatoe 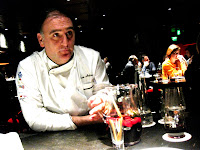 s" you heard a special passion in his voice. After we had eaten them, we understood completely.

So easy to make, their simple textures and flavors show how easy it is to elevate even the mostly lowly of ingredients into something magical...if you know how. 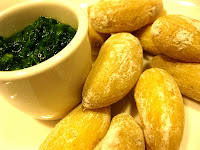 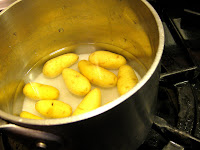 Put the potatoes, water, and Kosher salt into a pot and simmer for 10 minutes. With a wooden skewer, test to see if they are almost cooked. Pour off two-thirds of the water, being careful to reserve as much salt as possible.

Lower the heat and keep a watchful eye on the potatoes. The goal is to evaporate the water completely so the potatoes are coated in salt, being careful not to bu 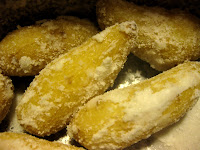 rn the salt or the potatoes. Cook another 3-4 minutes, then remove the potatoes from the pot and let cool.

Using a kitchen towel, wipe the excess salt off each potato so there's only a light dusting of salt on each. Do the potatoes one by one so the skin doesn't break.

Place the potatoes on a plate.

Run a skewer through the garlic cloves and char them on an open flame. Brush off the blackened skins and roughly chop. Place the parsley and cilantro leaves, the roasted garlic, black pepper, and olive oil into a mini-blender and puree to a smooth consistency.

Pour the sauce into a small bowl and serve with the potatoes. The sauce will keep for a week in a closed container in the refrigerator and can be served with fish and chicken.

Variations for the sauce