Morocco, Closer than Paris and a Lot More Exotic

To get a good photograph of Casablanca's Mosque Hassan II took a lot of backing up and avoiding the crowds of international tourists who had come to visit one of the world's largest mosques. 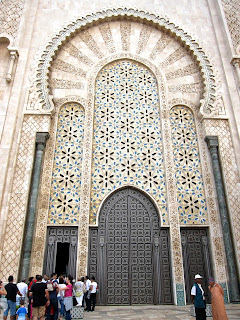 The building is not only about size, but details. The mosque invites visitors to appreciate the scale of nature and the intricacies of life as represented by the exquisite metal and tile work. As if it were the land's sentinel protecting man from the violence of the world, the Mosque stands on the edge of the North African continent, on the edge of a palisade overlooking the turbulent Atlantic Ocean. 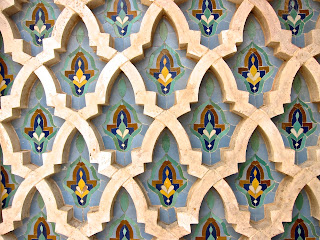 A trip to Morocco often begins in Casablanca and frequently tour guides make the Mosque one of the first stops. After the majesty of the Mosque, we traveled north-east toward Fez, stopping in Mouly Idriss, a historically important hill city where we had lunch at Restaurant Alaambra with an open air-patio and grill. 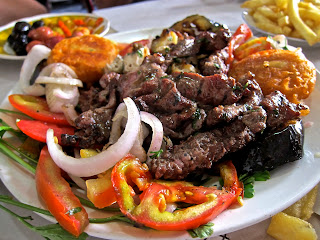 The Mosque and Restaurant Alaambra were two good tent poles for our Moroccan trip. The spiritual and sublime mixed with the very human scale of every day life.

Visit a souk in Fez, Marrakech or seaside Essaouira and life tumbles out. Freshly butchered sheep, goats and cattle hang in the open air. Rabbits, pigeons and chickens sit quietly in wire cages waiting to be selected and turned into the family dinner. As a former French colony, bi-lingual Morocco has as many excellent bakeries selling croissants as Arabic bread. 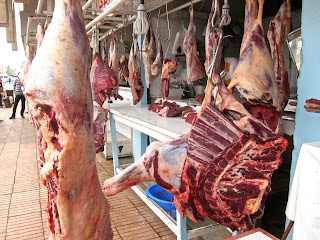 A press trip to Morocco for New York Daily News circumnavigated the country, showing us the coastal cities of Casablanca and Essaouira, inland to traditional Fez, the Roman ruins of Volubilis, cosmopolitan Marrakech and relaxed Imlil in the High Atlas Mountains.