With one day in Seattle, I could only visit a few places. Luckily the hotel was close to Pike's Place 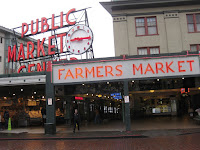 Market, so a quick trip before the day began was easy to do. Mornings are a good time to walk through the Market before the crowds arrive, because it's easy to stop and take your time looking at what's for sale, which is a lot of the freshest most beautiful fish, shellfish, and salmon you're likely to see anywhere. 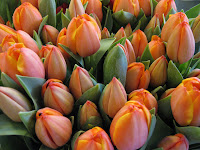 I love shellfish. When I lived in Seattle for the Twin Peaks and Citizen Baines' shoots, I was very 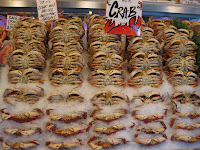 happy. I'd fill up on fresh Kumomoto oysters, Dungeness crabs, and Penn Cove mussels. The oysters are delicious raw or in stews. The crabs are sold cooked or live. The mussels are easily steamed and eaten with a butter-garlic broth. While the vegetables in the Market come from many sources including California, the fish is local, coming no farther away than Alaska. 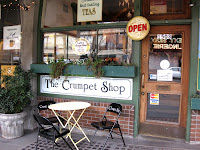 There are also fresh and dried flower stalls, bakeries, cheese shops, and a wonderful selection of small restaurants and coffee shops. A favorite place to stop is The Crumpet Shop (1503 1st Avenue between Pike & Pine, 206/682-1598) where the crumpets are freshly made and available with sweet (butter, honey, or preserves) or savory (tomatoes, pesto, cheese...) toppings. Come before 8:30am and the lattes are $1.50. 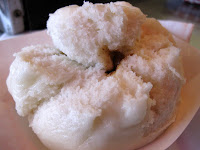 alked over to the Market twice yesterday. Once by myself just as the stalls were opening. For breakfast I had a freshly steamed pork bao from Mee Sum Pastry (1526 Pike Place, 206/682-6780). The second time I brought part of our press junket group. Since Holly and Updesh are Brits and Parmesh is Indian, I wanted their expert opinion about the

Crumpet Shop. I know I like them because of their top crust and chewy sweetness, but are they authentic? After several rounds of crumpets with butter, honey and butter, preserves, and cheddar cheese with sliced tomatoes, they agreed that they were authentic and delicious. We made a pact to come back today at 7:00am before we had to leave for Boeing Field to pick up our new 777-200LR.

We stopped for lunch at the Space Needle Restaurant, which is always fun. Although the view is picturesque, for 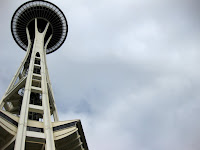 anyone with motion-issues, slowly rotating as the city passes below can be challenging. We had a very nice lunch as our group 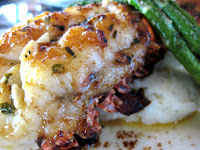 got to know one another. With people coming from around the world (Alberquerque, New York, Mombai, Dubai, Doha, Los Angeles, and Seattle) we had a lot to talk about.

After lunch we visited Boeing's Museum of Flight (9404 East Marginal Way South, Seattle, WA 98108, 206/764-5700). Since we were about to tour the Boeing factory in Everett, it was great to get a brush up on aviation history. I still find it amazing that there are just 50 years between the Wright Brother's tentative efforts to achieve flight and the development of the Mach 3 SR-71 Blackbird.

One of our group, Betsy, used to live in Seattle and she suggested dinner at the Black Bottle (2600 1st Avenue at Vine, 206/441-1500) where we had wine and cocktails and shared a dozen gastro-pub dishes, including crispy butterflied seven spice shrimp, deep fried and battered Spanish fried olive, fried tofu with a sate sauce, sweet and tender cumin pork tenderloin with a frisee salad, fried sardines with spicy Indian slaw, braised and grilled artichoke hearts, coconut gelato with plantain fries, and a luridly rich, hot dark chocolate cake with a scoop of vanilla gelato hidden inside.

Given 24 hours in Seattle, this was a pretty great day.

Today we tour the Boeing plant and pick up Qatar Airways' second Boeing 777-200LR. Our plane will join its sister already in service. When Qatar begins its daily, nonstop service between Doha and Houston on March 30th, the 777-200LRs will make the trip in under 17 hours. Today's trip will be a bit shorter because we will fly a more northerly route.

For me this flight has several firsts: I've never flown longer than 8 hours, never been to the Middle East, and certainly have never ridden on a plane's maiden flight.

More to tell in the following posts. Tomorrow from Doha, Qatar.
at February 23, 2009 1 comment:

Up until last year I didn't travel very much. The trips I took were to favorite places: LA to Sundance/Park City to be with my wife or LA to NY/NJ to see friends and family. I enjoyed these trips and looked forward to them. Getting away from LA made me hungry for adventures in other cities.

Last year I began to write for Peter Greenberg's terrific travel site. Peter and his editor-in-chief, Sarika Chawla, have been nice enough to send me on trips far and wide to write pieces as varied as a story about being a judge at a rib cookout in Sparks, Nevada and another about the wonderfully luxurious Sofitel Hotels in Los Angeles, New York, London, and Paris.

I am grateful for the opportunity to get outside of my regular routine. I discovered how much travel is good for the soul.

Which brings me to today. When I was going to travel to London and Paris I asked for suggestions. I wanted to know about favorite places, restaurants, locales that were meaningful to you. Over the next four weeks I am luckily going to take a series of trips for Peter and I'd love suggestions. Some are close at hand, others are very far a field. Any suggestions would be appreciated.

Seattle, Washington. Doha, Qatar. Houston, Texas. Sonoma/Glenn Ellen, California. How often in a life-time does any one have the opportunity to visit such disparate places?

Years ago I worked on two TV shows (David Lynch's Twin Peaks 2 hour pilot and the pilot for a John Wells show, Citizen Baines) that were filmed in Seattle and the surrounding areas. I enjoyed the experiences very much. For this trip, I'm looking forward to revisiting some of my favorite places: Pike's Place Market and Torrefazione Italia, a coffee shop that makes the best cappucinio I have ever had.

I'm looking forward to these trips and I would benefit from your suggestions.
at February 22, 2009 No comments: