Last year I wrote about the Grand Central Market to describe the mix of old vendors and the new, upscale stalls that had opened over the previous year. Yesterday I stopped at the Market to pick up pork ramen ($5.50 for a large bowl) from Bento Ya, one of my favorite stalls selling inexpensive Japanese food to be eaten there or taken home.  Having read about new businesses that were coming in 2016, I expected to see some change. What I saw was much more radical change than I expected. 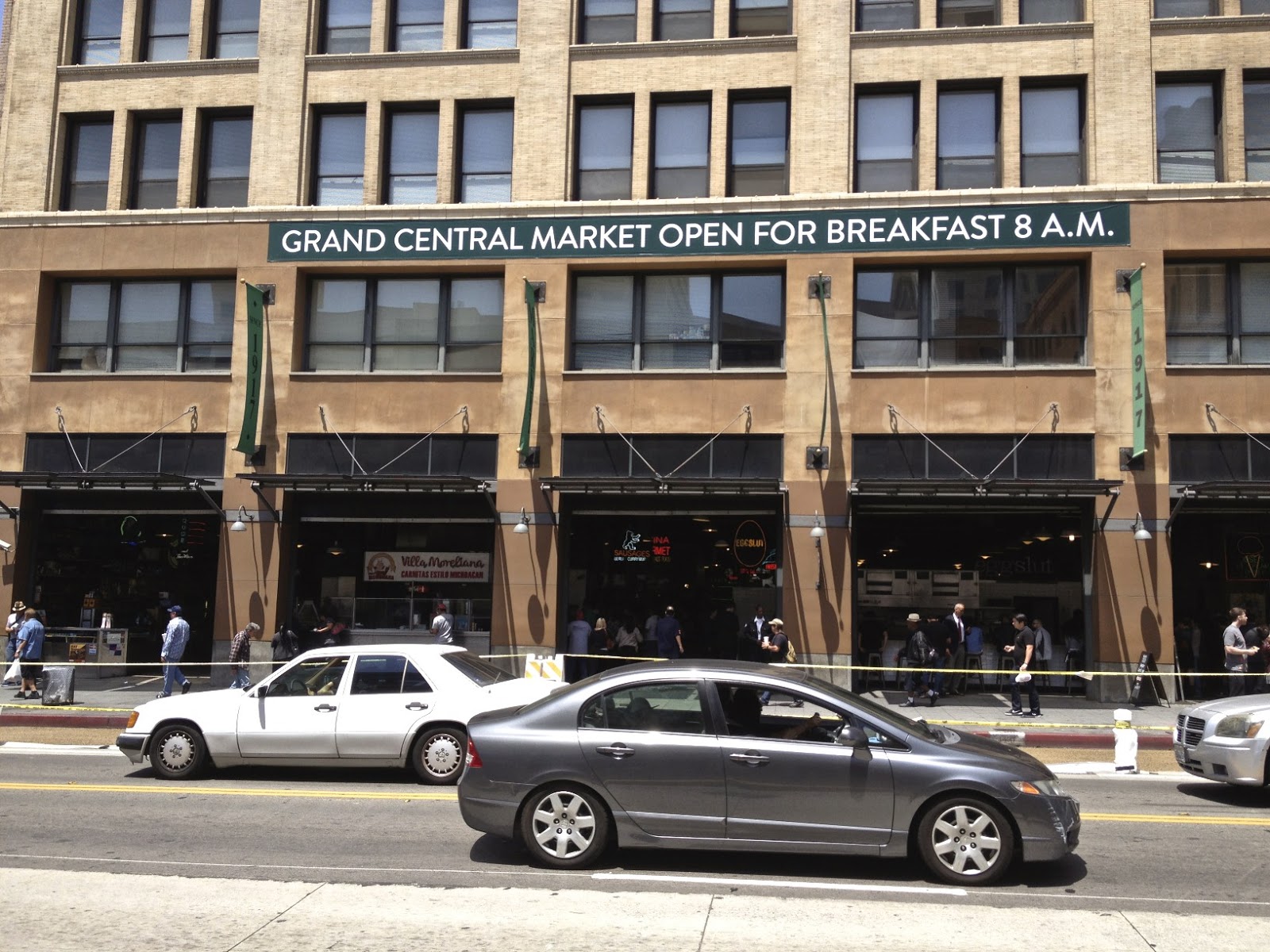 The shoppers who filled the aisles, bought fresh produce, fruit, fish, meat and poultry. Freshly made tortillas traveled down a conveyer belt where they were stacked in plastic bags and sold still warm in the open-air tortilla factory that once stretched along the southern wall close to Broadway .


The Market specialized in health products, fresh fruit juices, herbal teas and homeopathic remedies from around the world. 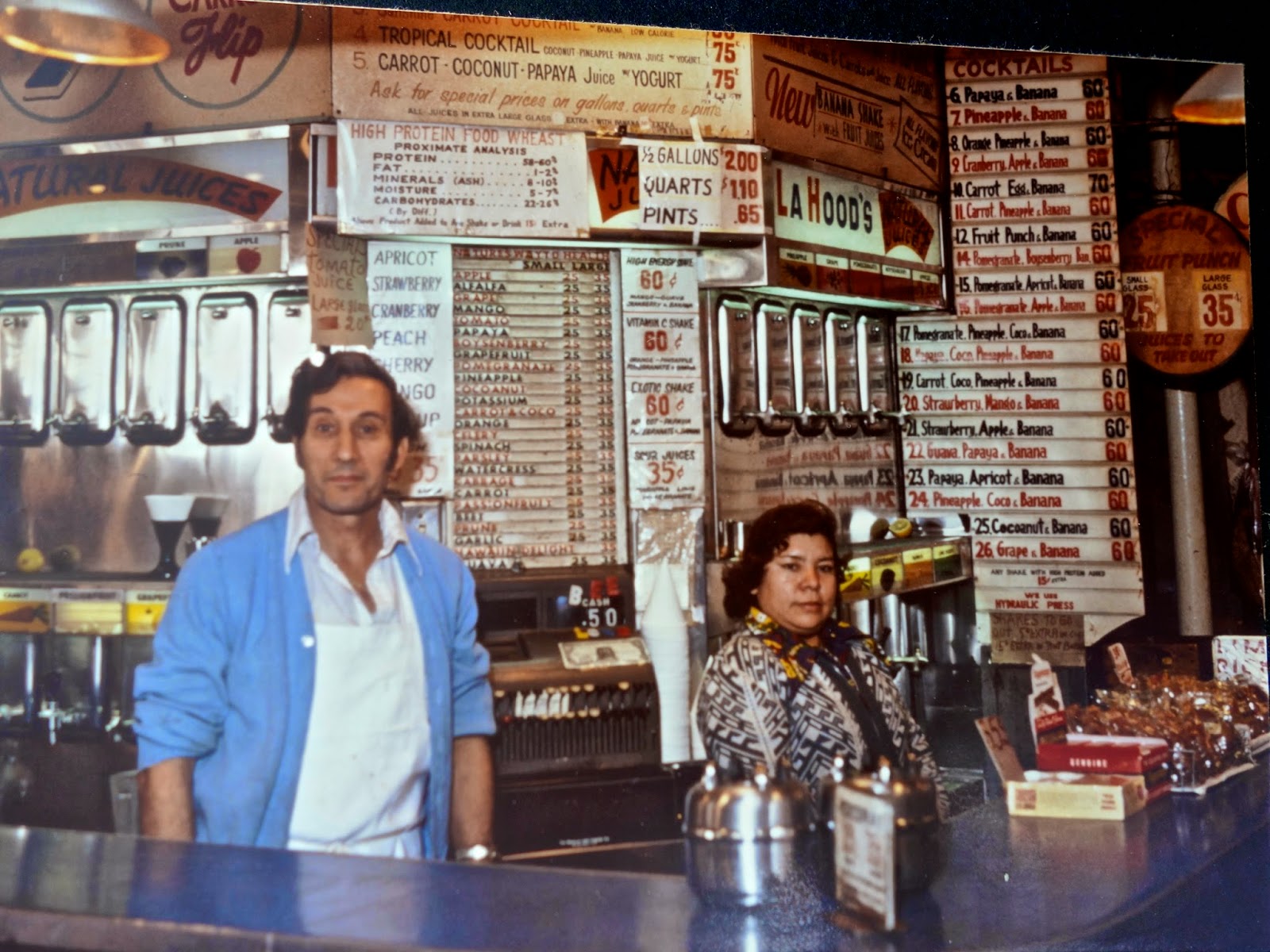 And where there are shoppers, they will be places to eat. Dozens of stalls sold Mexican tacos, enchiladas, ceviche, whole lobsters, plates of fried fish and shrimp in the shell. Anyone who needed an old-school Chinese-American food fix could eat at China Cafe and Broadway Express. 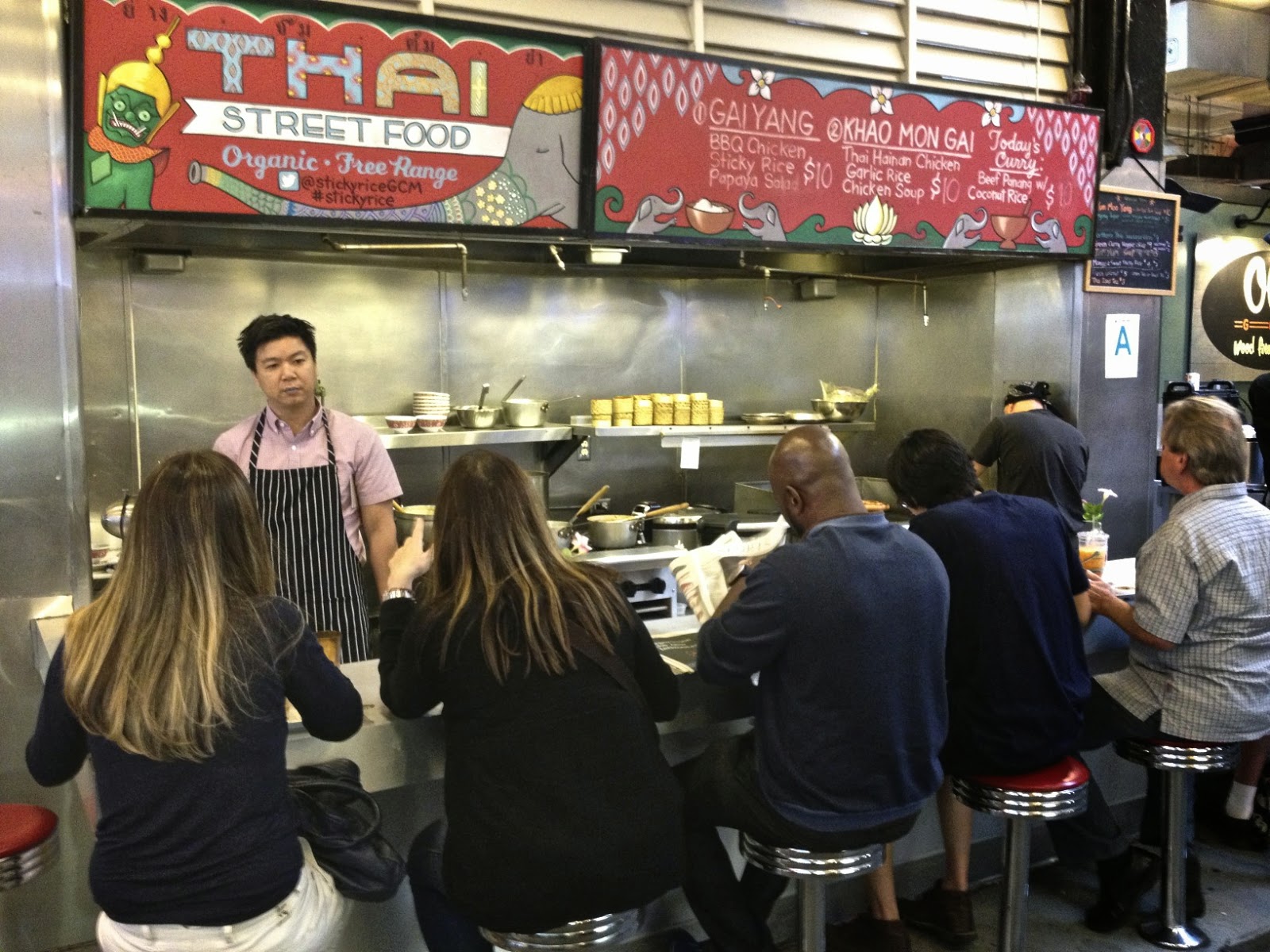 Today, some of the vendors have been at the Market for generations. On the Broadway side, you can't walk by Las Morelianas without being offered a taste of their delicious roast pork inside a freshly made mini-tortilla. A personal favorite, to the moist meat I add  mounds of pickled onions and carrots, chopped raw onions and cilantro and a liberal dousing of green chili sauce all freshly made. 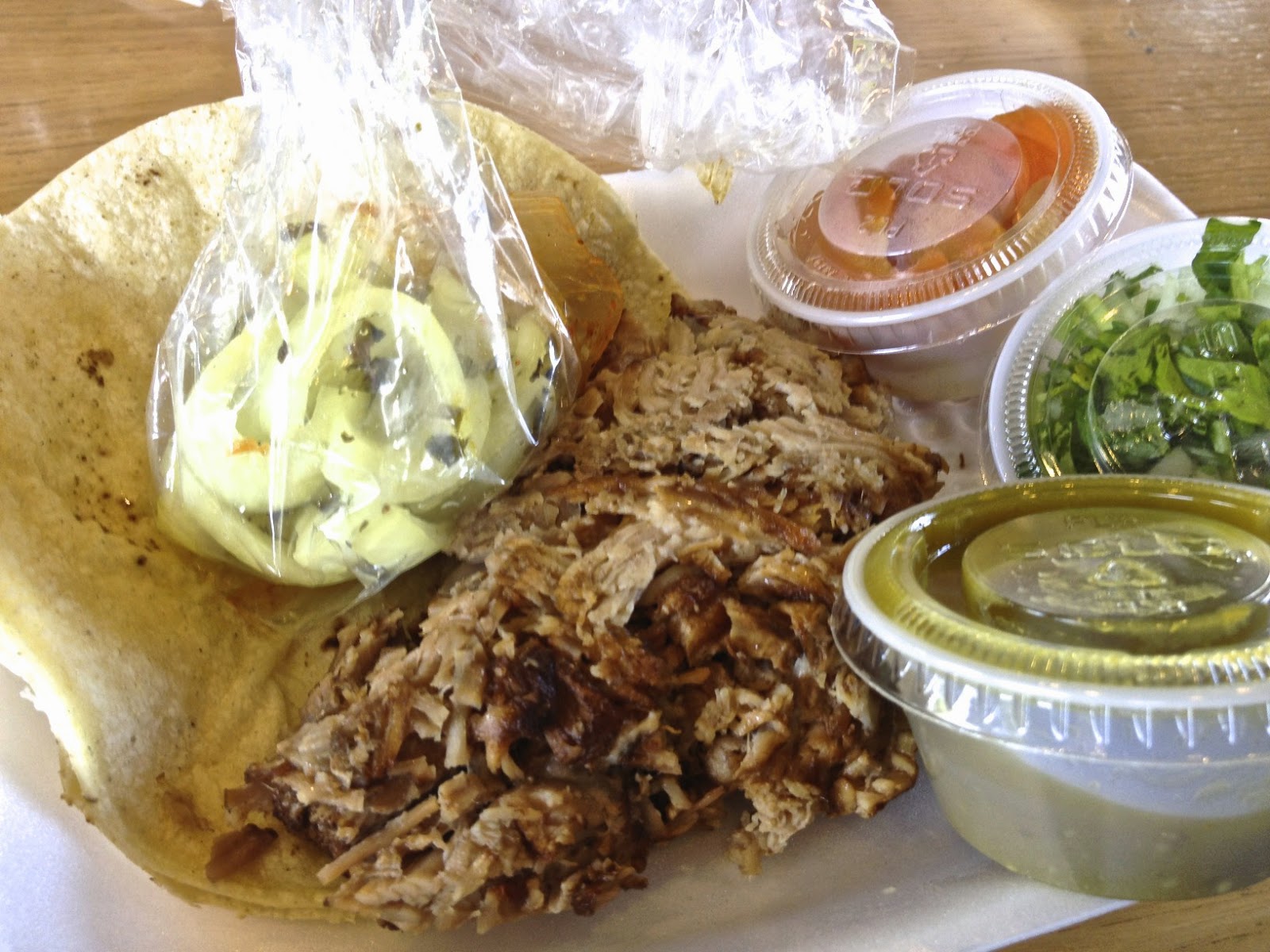 I first visited the market when I was in college. I bought spices at Valeria's and the ready to use mole paste at the very misnamed A&B Coffee where I could also buy any one of a dozen different dried beans. I wanted to learn how to make tortillas at home. I came to the Market to buy masa and a tortilla press. The tortillas were good, but, I had to confess,  the ones I bought at the Market were better so I kept coming.

In the late 1970's I photographed the Market to use for a TV pilot I was producing for KCOP. I took a hundred photographs of the vendors and customers. I loved the community feeling of the Market. Families with babies in tow shopped for the basics and stopped to have snacks or lunch. 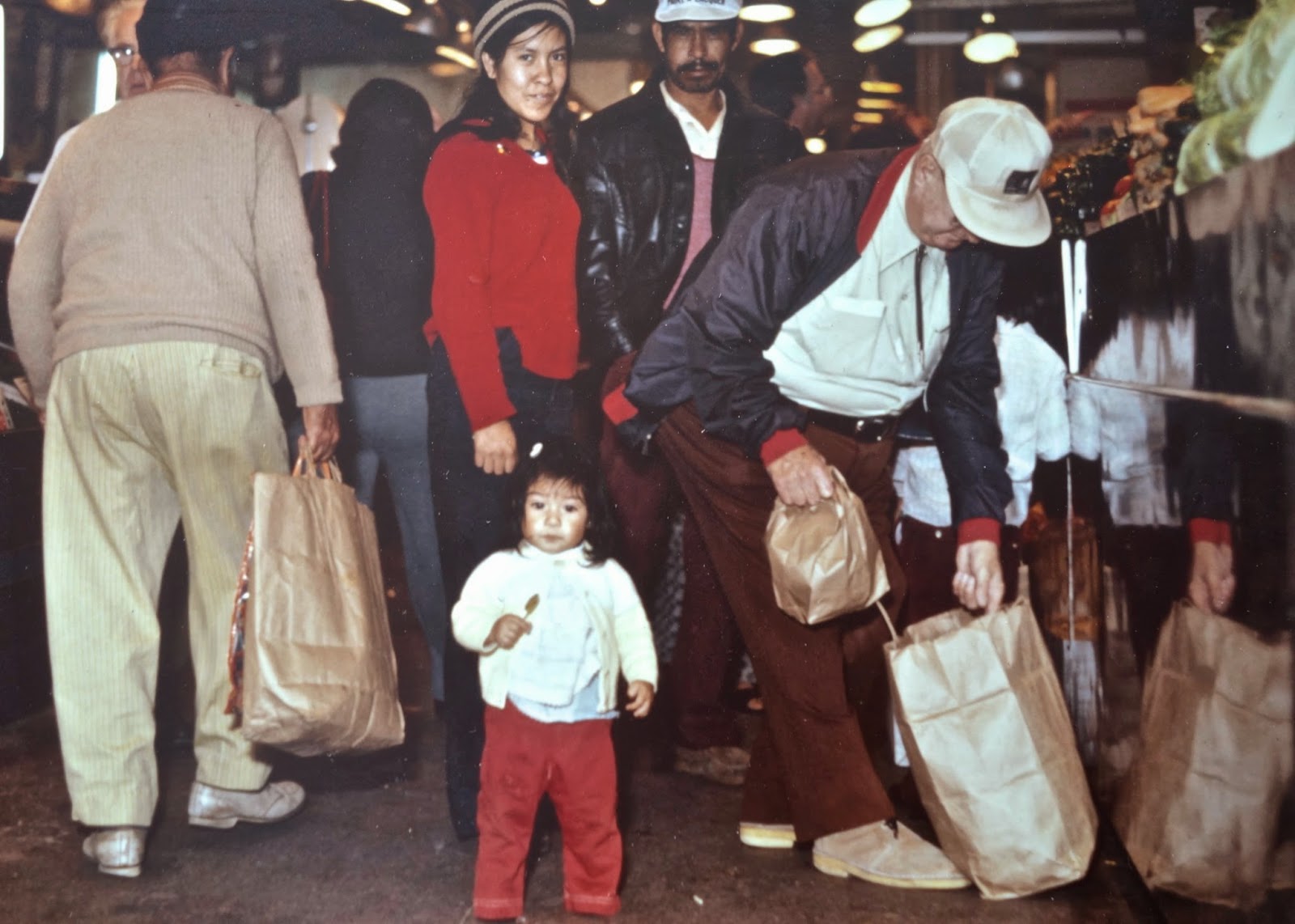 Today the market still has families doing their daily shopping but they have been joined by a new population, eager to explore the newly arrived vendors who have set up shop and added new flavors and culinary experiences. 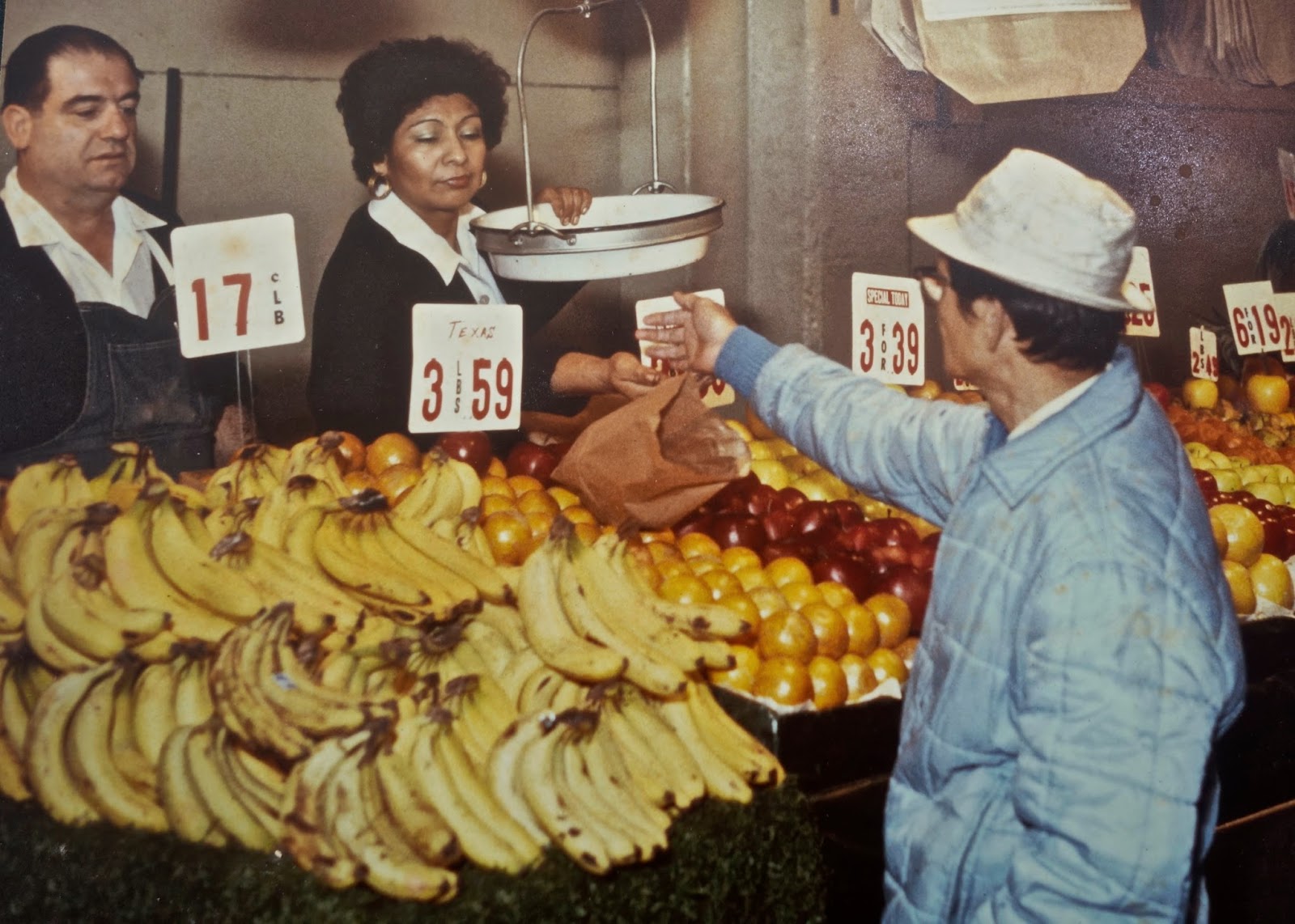 Judging from a recent trip to the market, the old vendors are disappearing rapidly. Only one vegetable and fruit vendor remains. All the fresh fish purveyors are gone. 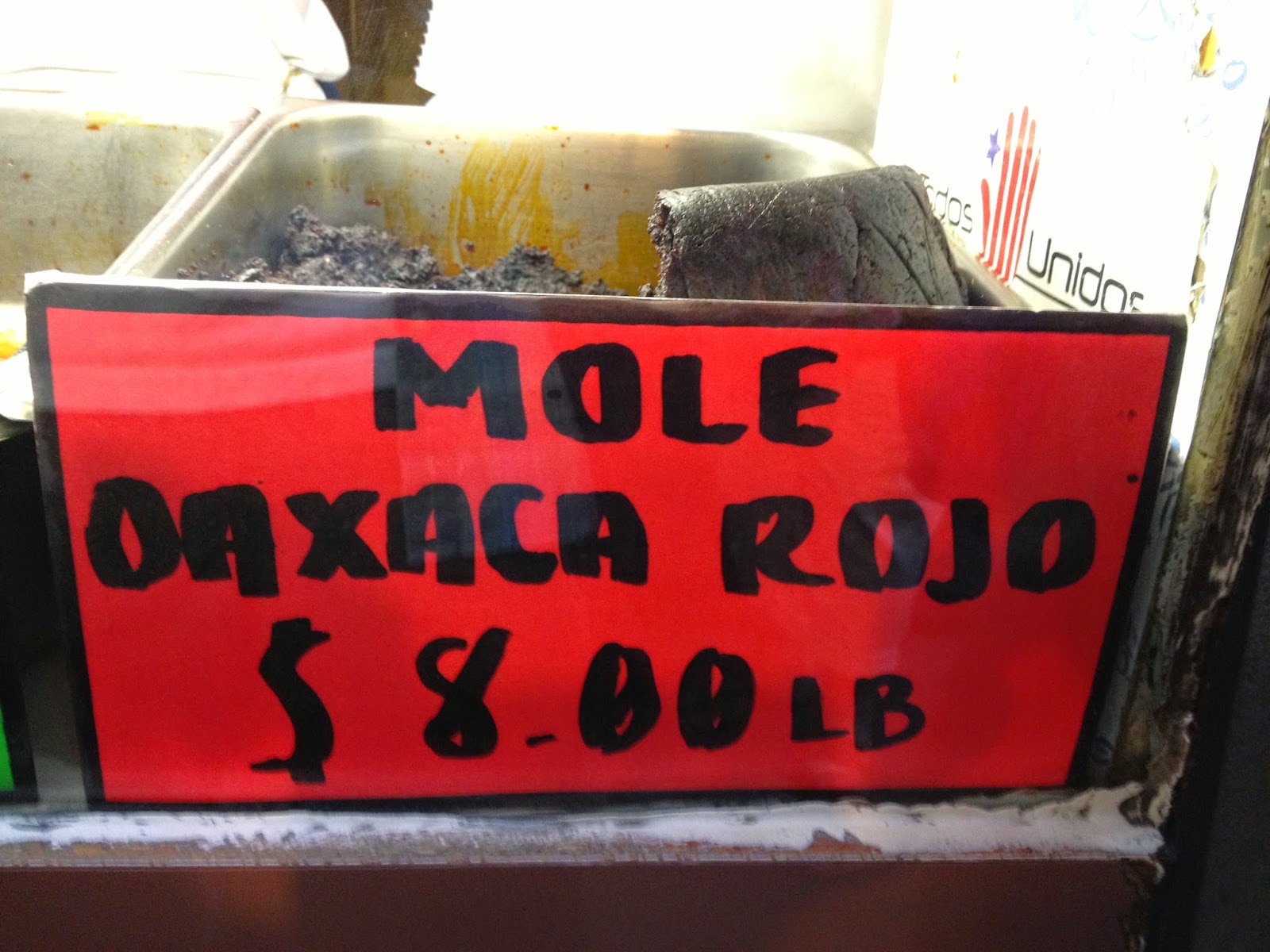 At the market, I have my favorites and they are a mix of the old and the new:  the mole at A&B Coffee (ask for a taste and find the one you like), pork ramen at Bento Ya, the vegetable curry with shrimp and Crying Tiger beef at Sticky Rice, the roast pork tacos at Las Morelianas with lots of salsas and pickled vegetables and the beef at Belcampo Meat Co. (terrific although pricey, Jared Standing, Head Butcher suggested I try one of the less expensive cuts, the chuck eye steak and it was delicious!). 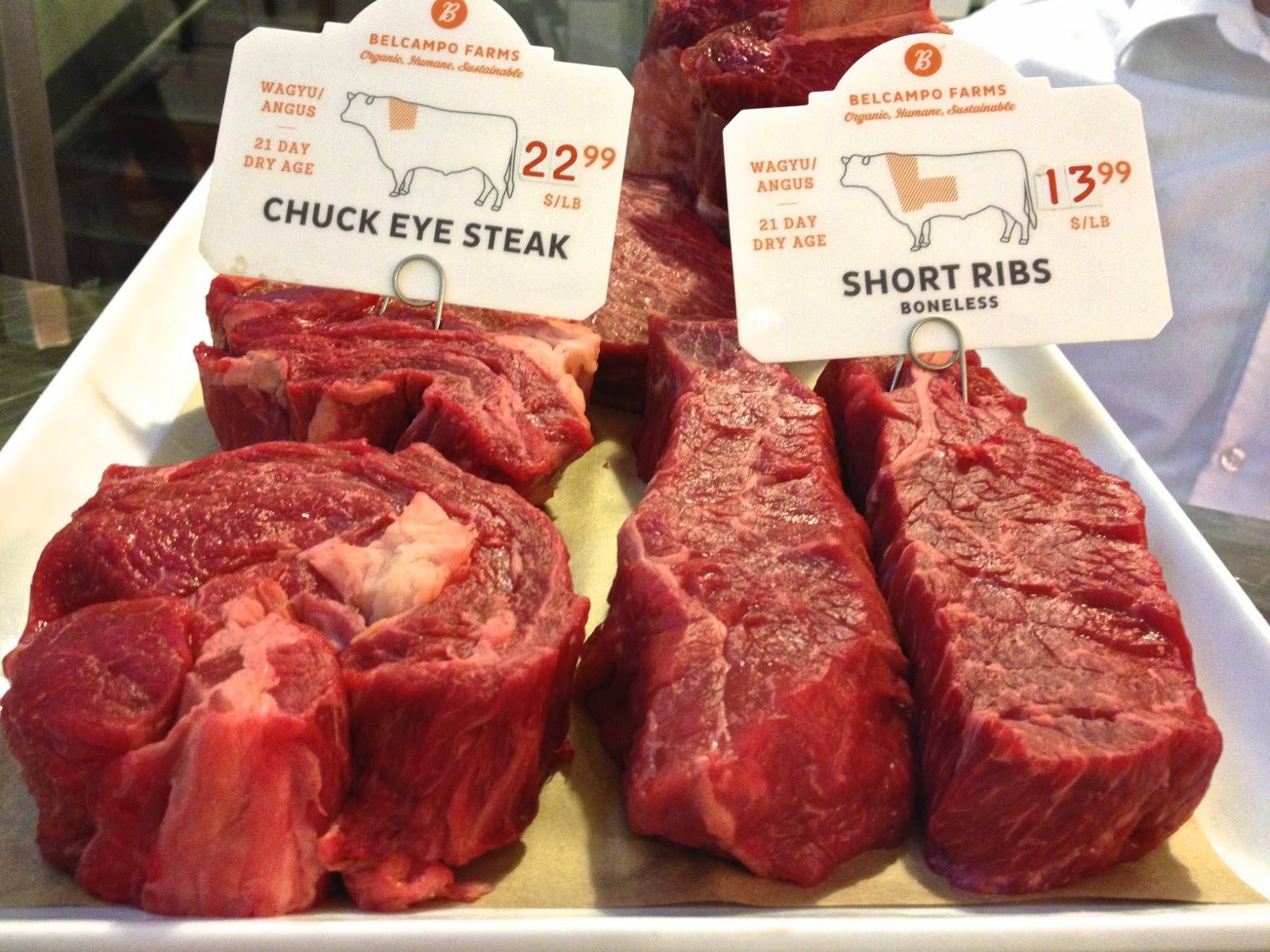 At this moment in time, the Market still balances the new and the old so that I can indulge my passion for affordable ethnic food and quality products from specialty purveyors. But the market feels like it has reached a tipping point when as the new pushes out the old.

The mash up of new and old reflects what's happening Downtown. The mostly Latino population has been joined by a diverse mix of young professionals who have rediscovered the glories of Downtown Los Angeles, rich with history and benefiting from a great collection of buildings that are now being renovated and modernized. 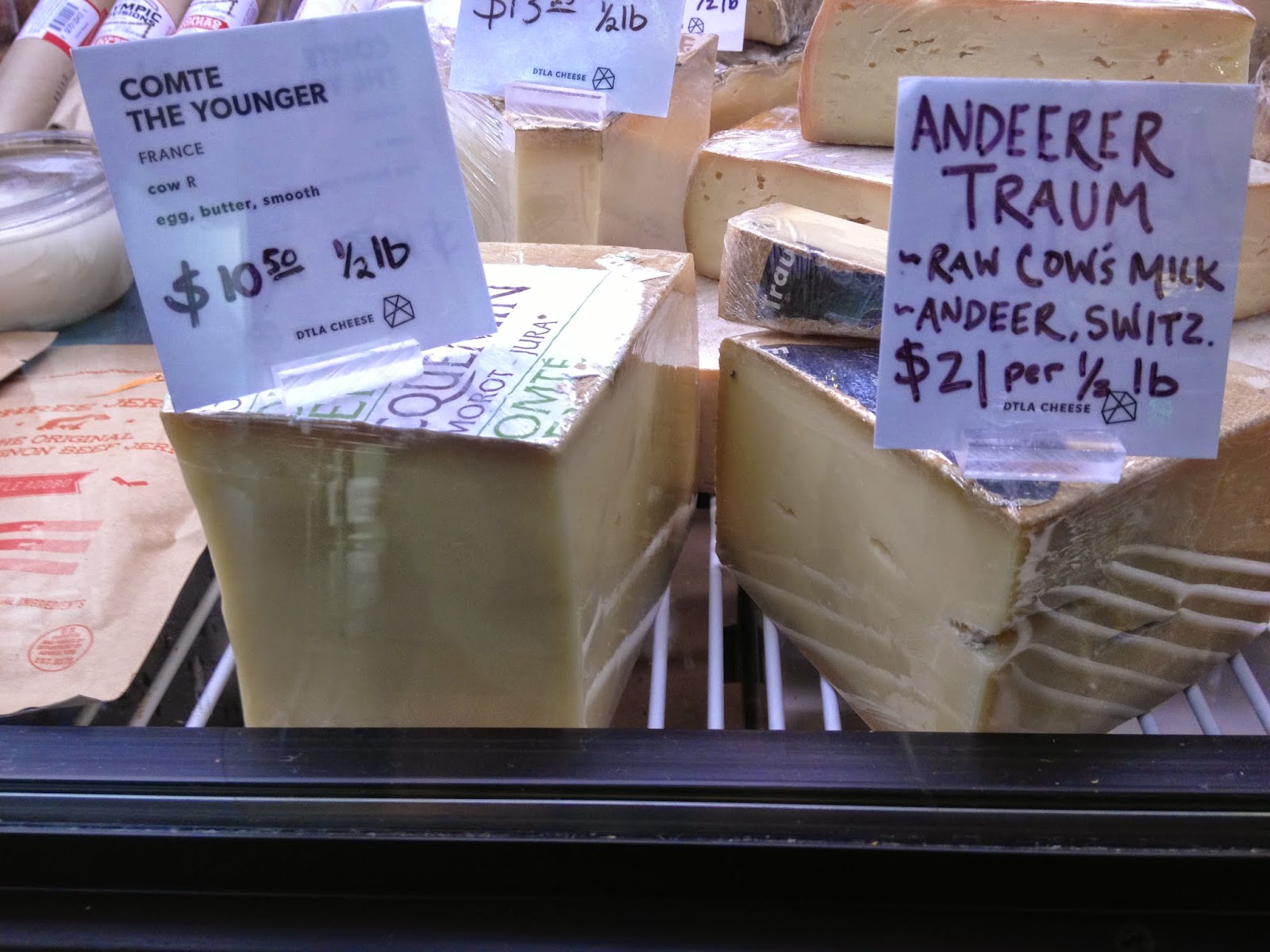 Before that rediscovery, the Market had fallen on hard times. Local shoppers had turned to farmers markets for better produce. One by one stalls closed for lack of customers. The grit and grime of the city settled heavily onto the walls and floors. The Market had grown sad and forlorn. 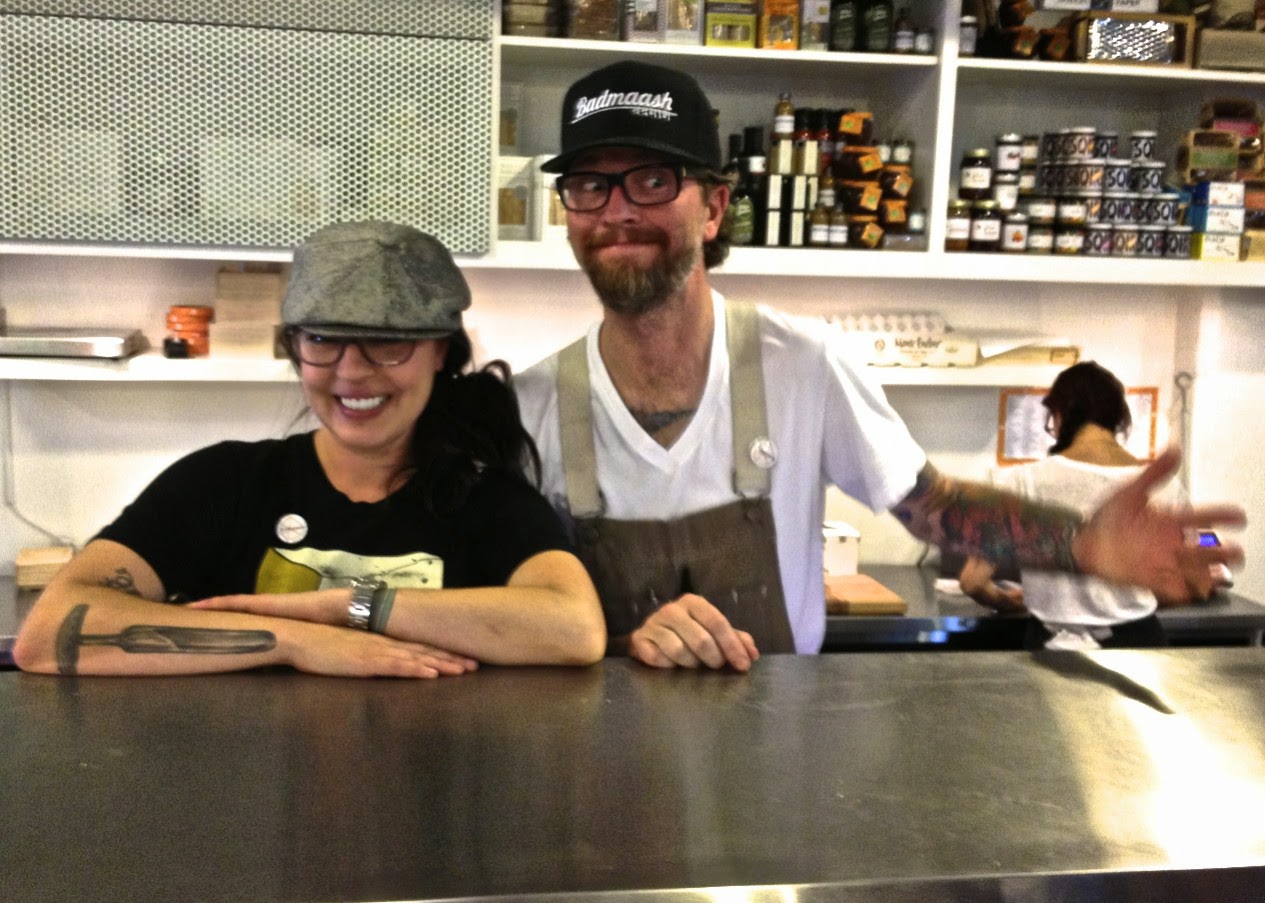 But today, the Market is one of the most frequented Downtown destinations. Come during the day and the aisles are packed with families and professionals enjoying a taco plate from Sarita's Pupuseria and pulled pork at Las Morelianas on Broadway.

Inside the market Wexler's house smoked lox on a freshly baked bagel, freshly made seafood at Mark Peel's Bombo and Bento Ya's $5.50 pork ramen that, in my opinion, is as good as any of the celebrity-chef bowls on Sawtelle or in Manhattan sold at three times the price and half the portion. 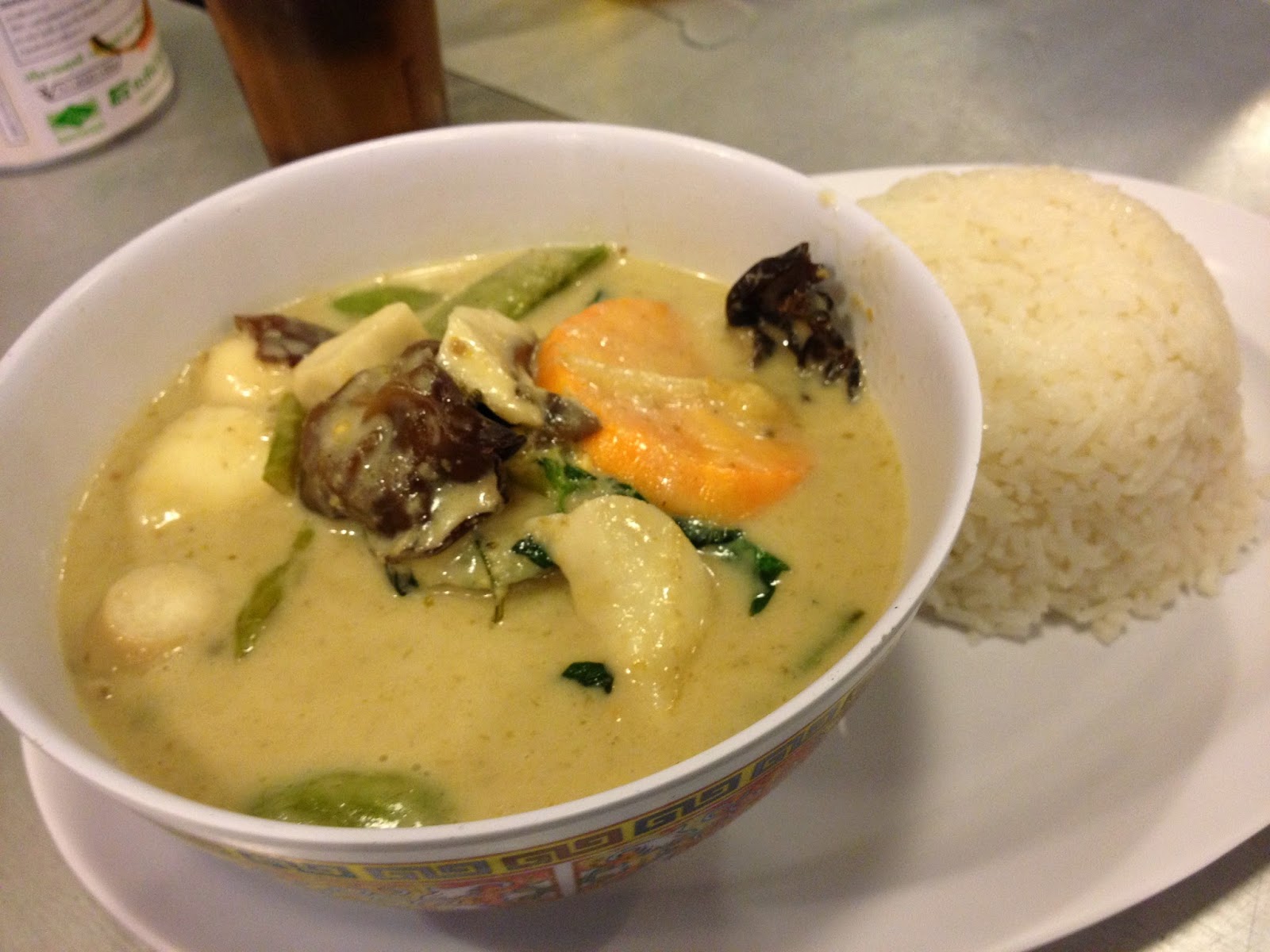 There is so much more to say about the Market, but I'm getting hungry. Happily I brought home a bowl of Bento Ya's ramen and I'm going to have that for breakfast.

One quick user's-tip about parking. Parking Downtown is very expensive. Happily, there is 90 minutes parking inside the Market building for $2.00. The entrance is on the Hill Street side, almost to 2nd street.

On the weekend, the open air parking lots to the north of the Market above 2nd Street have reduced, all day rates, so if you are staying for several hours, park there.

The market is changing so quickly, I would encourage you to visit as soon as you can so when people talk about the way it used to be, you will know what they are talking about.