Besides making the turkey for Thanksgiving, my mom always made apple pie. Her recipe for the filling was classic in its simplicity: apples, brown sugar, lemon juice, and raisins. I’ve played around with her recipe but never improved it. The crust, however, was a different matter.

Over the years I tried dozens of recipes with varying results. When I finally settled on a recipe that worked there was still something missing. Sure I wanted the crust to be light and flaky with a buttery flavor and a little sweetness, all of which nicely framed the flavors of the apple filling but I still felt something was missing. 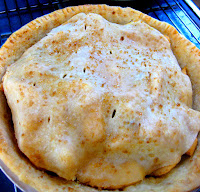 I wanted the crust to add to the flavors of the apple pie, not just frame them. That’s when I hit on using crystallized ginger to add sweet-heat to the crust.

You can use any tart apple or, as we prefer, one with more flavor like a Fuji.

Sprinkle flour onto a cutting board. Remove the ball of dough, divide into two pieces, put onto the flour and flatten into two 6” disks. Wrap each disk separately in plastic wrap. Refrigerate for at least 60 minutes.

On the floured cutting board, remove one disk from the plastic wrap and roll out the dough so it covers a 9” pie dish. Gently lay the dough over the pie dish and press down to fit. Trim the excess dough off the edge with a sharp paring knife. Make a dozen holes in the bottom of the dough. Weigh down the dough with ceramic pastry balls, uncooked rice, or beans and bake 15 minutes in a preheated 375 degree oven. Remove. Let cool on a wire rack. Remove the weights.

For the filling, put the lemon juice, raisins, and brown sugar in a large mixing bowl. Toss the apple slices in the mixture so the apples don’t discolor. Using a rubber spatula put the slices and juice in the prebaked crust.

Roll out the top crust on the floured cutting board as before. Lay the pastry on top of the pie. Trim away the excess and press together the edges of the top and bottom crusts. Use a paring knife to make half a dozen slits in the top pastry to allow steam to escape.

Bake in a preheated 375 degree oven for 30 minutes. Remove from the oven. Lightly beat the egg white with 1/2 teaspoon of water. Brush the pastry with the egg white and sprinkle the remaining teaspoon of raw sugar over the top. Return to the oven for an additional 25-35 minutes or until the crust is nicely brown.