What’s your favorite comfort food? Do you prefer savory or sweet? Maybe a hot fudge sundae topped with whipped cream puts you in a Zen state. Maybe it’s a fresh-out-of-the-oven chicken pot pie with wild mushrooms or mac n’ cheese with extra cheddar. For Chef Mirko Paderno, a plate of freshly made gnocchi reminds him of home in Northern Italy. In his Vinoteca and Culina kitchen, he showed how to make gnocchi. 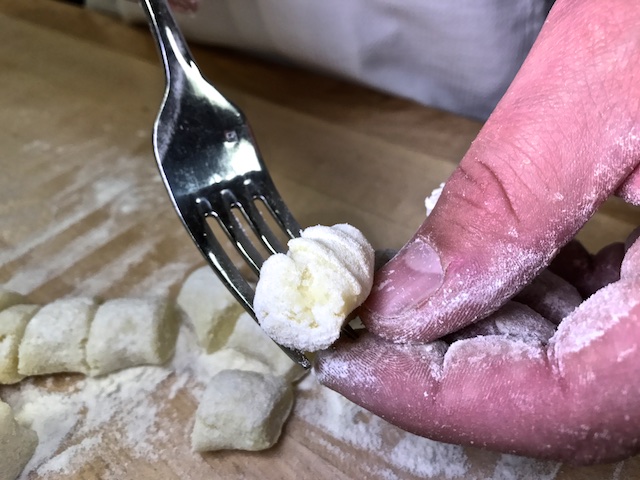 Often served in upscale restaurants as a fine dining dish, gnocchi is as basic to Italian home cooking as pasta. The sauces may change and the markings on the little “pillows” may differ depending on the region, but gnocchi is made with three basic ingredients: potatoes, flour and (most often) an egg. 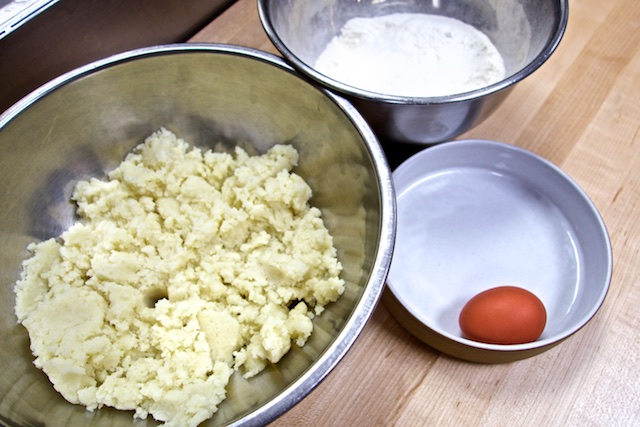 Although there are a variety of opinions about how to make gnocchi, for Paderno if you can boil water and roll out a pie crust, you can make gnocchi. No special kitchen tools are required.

And, he loves gnocchi because of it's versatility. Perfect in winter with a hearty meat sauce or in summer with a light pesto or butter sauce.

Making gnocchi is his yoga
Rolling out the dough puts Paderno into a relaxed, Zen state.  On rainy days, he enjoys making gnocchi with his teenaged daughter. 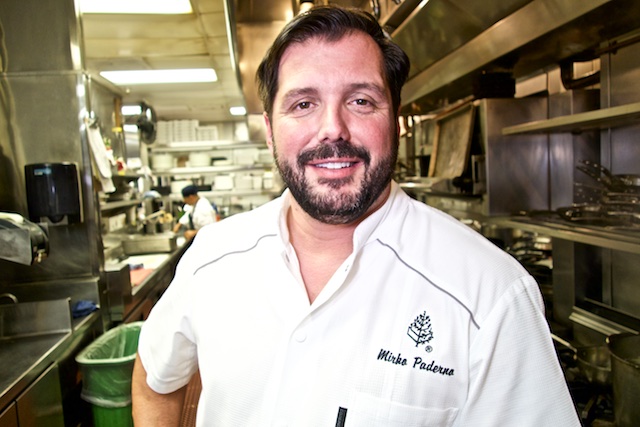 A James Beard Nominee and a seasoned veteran of kitchens in Italy and Los Angeles, he began his culinary career at the Four Seasons Hotel Milan. With his appointment as Executive Chef at Culina and Vinoteca, he has come full circle, returning to the Four Seasons family. In between, he worked in some of Los Angeles’ best restaurants. Piero Selvaggio’s Primi, Cecconi’s, Oliverio at the Viceroy and DTLA’s Officine BRERA.

But when he was a teenager, he wasn’t certain what he was going to do with his life. That’s when he enrolled at the Cesare Ritz School in Marano. At the time, he wasn’t that focused on cooking. One of his teachers, Abramo Magnani saw talent in him. But Magnani told him point blank, if he didn’t focus and apply himself, his talent would never amount to anything. In one of those wonderful moments when a person’s life changes forever in a good way, Paderno accepted the challenge.
At Vinoteca and Culina, that determination has paid off. His reworking of the menus has created dishes that give local diners an authentic experience with modern Italian food. Unlike many hotel restaurants, Paderno makes changes to the menu depending upon the seasons, the availability of quality ingredients and feedback from his diners. He combines the California love of seasonal food with Italian regional touches.

Reflecting that dual vision, Paderno worked with Sommelier Amanda Craig who created a wine cellar with a comprehensive selection of wines from around the world but especially from Italy and California. In a tasting flight I selected she paired an Arneis from Piedmont with one from Santa Inez and a Vermentino from Liguria with one from Arroyo Secco in California. The differences were marked. All were delicious.

Gnocchi Made with Cold Potatoes

For Paderno, two details are key to making the best gnocchi. The potatoes must be steamed over salted boiling water so the flesh does not become water-logged. And, the dough must be made with cold cooked potatoes so less flour is needed.


By using cold potatoes, the dough can be prepared before the meal, even the day before. But if hot potatoes are used, when the egg and flour are added, the gnocchi must be cooked immediately to avoid becoming soggy.

Paderno uses Idaho russet potatoes because they have a neutral flavor, the better to work with a variety of sauces. But he suggests using any potato you enjoy, even sweet potatoes or purple potatoes.

Paderno uses “00” flour which blends easily with the potato. If “00” is not available, use all-purpose (AP) flour.

The amount of flour used partly depends on the moisture of the cooked potatoes. Getting the right density takes a bit of practice. The gnocchi dough should be not too dry and not too damp. Like pastry dough, with a dusting of flour, the gnocchi should roll out without sticking on the work surface. Watch the video to see Paderno’s technique.

Place a steamer on the bottom of a large pot. Add water only to the bottom of the steamer. Season with 1 teaspoon kosher salt. Bring to a boil. Place potatoes in the pot. Cover.

Depending on the size of the potatoes, cook 20 minutes or until a paring knife can be inserted into the potatoes easily. Add water as needed if more steaming is required. Remove when the potatoes are soft but not mushy.

Allow potatoes to cool. Peel and discard the skins or reserve to sauté for breakfast. Run the cooked, peeled potatoes through a potato ricer or food mill using a fine blade.

Sprinkle work area with flour. Place potatoes on the work area. Create a “volcano,” the way you do when making fresh pasta, with a depression in the middle of the mound. Dust flour over the potato and place a raw egg into the center of the volcano.

Using fingers, work the egg, flour and potato together until all ingredients are combined. Create a ball.

At this point, the dough can be wrapped in plastic wrap or placed in an air-tight container and refrigerated to use later or the next day.

Before cooking the gnocchi, make a sauce. That can be as simple as a butter sauce with a little pasta water or as complicated as a braised meat ragu. 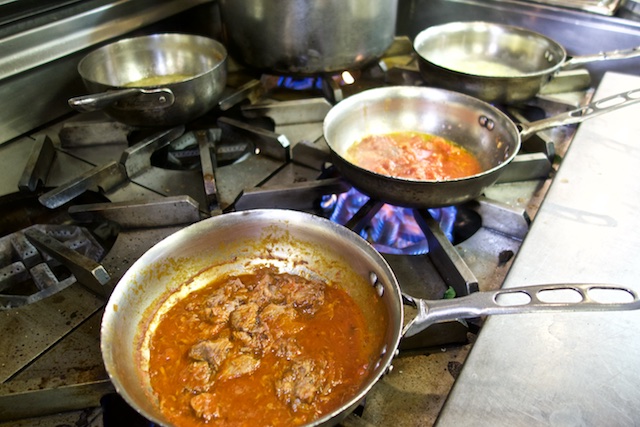 Sprinkle the work surface with flour. Work in batches. Cut off a cup of dough at a time. Using both hands, fingers and palms, roll the potato dough back and forth until it takes the shape of a dowel, about 1” in diameter. 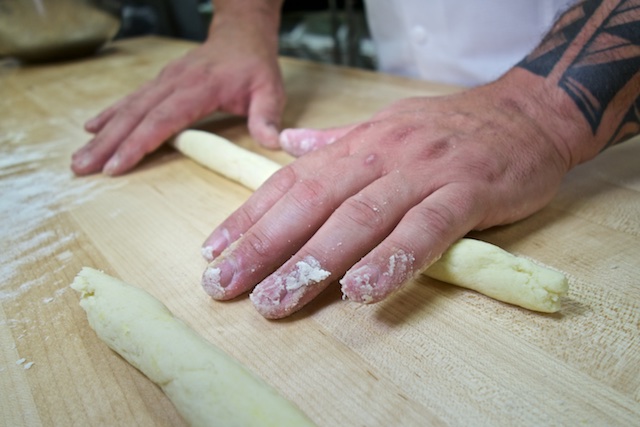 The dough is forgiving so if the dowel breaks apart, start over.

Once you have made a uniform shape, create individual gnocchi using a pastry cutter or chefs knife. The gnocchi should be approximately 1” long. 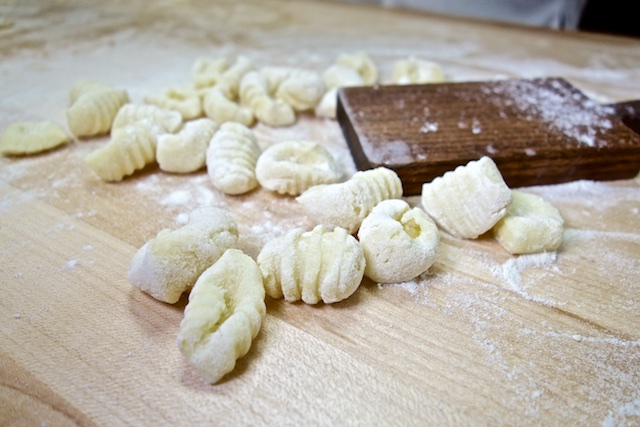 It is important to mark each gnocchi using a fork, your finger or a gnocchi board. The indentations will help the sauce stick to each gnocchi.

Fill a large pot with water. Add 1 teaspoon of kosher salt. Bring to a boil. 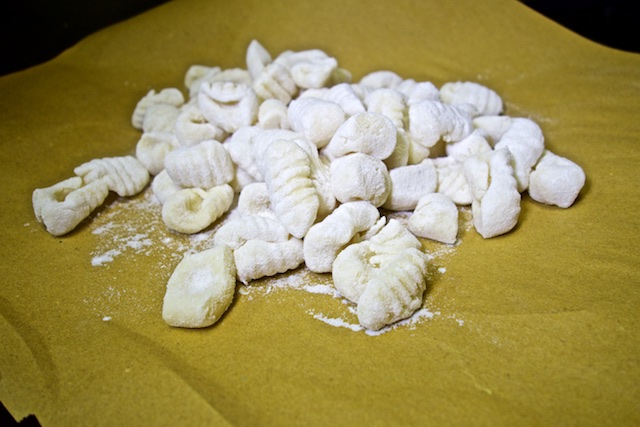 The gnocchi cook quickly, anywhere from 30-60 seconds. To determine how much time is needed, place several test gnocchi into the water. If the first gnocchi breaks apart, either the water is boiling too fast and/or the potato dough needs more flour, in which case you can return to the work area, gather up the gnocchi, sprinkle with flour, knead together, roll out and cut again.

If your gnocchi hold their shape, after 30 seconds remove one to taste. Then after 45 seconds. And another after 60 seconds. Decide which you like and use that timing to make the rest.

Working in batches, carefully drop a dozen gnocchi at a time into the boiling, salted water.

Using a wire strainer, remove the gnocchi from the boiling water.

Drain and add to the heated sauce, which can be as simple as sautéed San Marzano tomatoes with olive oil or a tablespoon or two of pasta water mixed with melted butter like Rodolphe Le Meunier’s salted French Beurre de Baratte.