Ready. Set. Time to Pickle - Kosher and Moroccan-Style Pickles for Thanksgiving and Anytime

Pickles are delicious anytime of the year. For many years I have made my two favorite kinds of pickles for Thanksgiving. Kosher dill pickles and Moroccan-style pickled vegetables. Part of our Thanksgiving tradition is to post these recipes to share them with you. That way, our tables will connect on this very wonderful holiday. 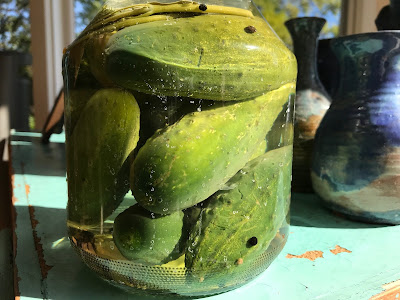 No doubt the people who made the first pickles thought they had made a mistake. Somebody accidentally forgot about some raw vegetables in a pot with an acid and salt. Surprise, surprise. A week later, the vegetables weren’t moldy, no bugs had eaten them and, deliciously, they had a nice crunch and tang. Thus was born, the pickle!
In the 1920s, my great-grandfather made pickles on the Lower East Side of Manhattan. Grandmother Caroline used to tell stories about working in their little grocery store as a child. When customers would want pickles, she would hop off the counter and go out front to the pickle barrels and fish out the ones they wanted.
I never knew her parents. I never ate their pickles, but I must have brine in my veins because wherever I travel, I am always on the look out for pickles. 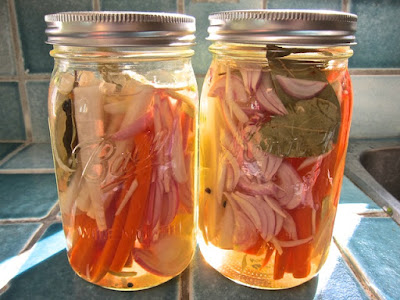 In Morocco at a cooking class in Marrakech at La Maison Arabe, Amaggie Wafa and Ayada Benijei taught us to make Berber bread, couscous with chicken and vegetables, chicken tagine with preserved lemons and clarified butter, tomato marmalade, eggplant-tomato salad and preserved vegetables.
The cooking class lasted four hours. The time it took to show us how to make preserved or pickled vegetables: five minutes.
To Wafa and Benijei, the process was so easy, there were no pickle recipes. A little of this, a little of that, throw the vegetables into a jar, shake it up, put it in a cupboard and in a week, voila, you have pickles.

From my grandmother I learned that making kosher dill pickles was a little more complicated. In retrospect, I think that’s because pickling cukes are more prone to decay than are the carrots, parsnip, fennel and green beans used in Morocco.
Every Thanksgiving I make both.
Pickles are very personal. What one person loves might be too salty or vinegary to another. It may take you several tries before you settle on the mix of salt, vinegar and spices that suits your palate.

Garlic is usually added to brine. My grandmother didn't put garlic in hers and I don't put any in mine so I indicated garlic as optional.

When making kosher dill pickles keep in mind four very important steps:
1. Select pickling cukes, not salad cucumbers, and pick ones without blemishes or soft spots.
2. Taste the brine to confirm you like the balance of salt-to-vinegar. The flavor of the brine will approximate the flavor of the pickles.
3. Once the cukes are in the brine, they must be kept submerged in an open container.
4. When the pickles have achieved the degree of pickling you like, which could take three days to a week, store the pickles in the brine, seal and keep in a refrigerator where they will last for several weeks.
Ingredients
8 cups water
¼ cup kosher salt
1 cup white wine vinegar or yellow Iranian vinegar (my preference)
4 garlic cloves, skin removed, root end trimmed off, cut into thin strips (optional)
5 dried bay leaves
10 whole black peppercorns
10 whole mustard seeds
¼ teaspoon pepper flakes or 1 dried Sichuan pepper, split open
5 sprigs of fresh dill
5 pounds small pickling cucumbers, washed, stems removed, dried
Directions
1. In a non-reactive pot, heat the water and vinegar on a medium flame. When the water gently simmers, add the salt and stir to dissolve. Do not allow the water to boil.
2. Dip your finger in the brine, taste and adjust the flavor with a bit more salt, water or vinegar.
3. Place the garlic and spices in the bottom of a gallon glass or plastic container. Arrange the cucumbers inside.
4. Pour in the hot brine being careful to cover the cucumbers. Reserve 1 cup of brine.
5. To keep the cucumbers submerged in the brine, find a plastic cup that is not as wide as the mouth of the container. Place the reserved cup of brine into the plastic cup and put into the container to press down on the cucumbers.
6. Place the container in a dark, cool corner of the kitchen. Check daily to make sure the cucumbers are submerged. If the brine evaporates, use the reserved brine in the plastic cup, replenishing the liquid in the cup with water to weigh down the cukes.
7. After three days, remove one cucumber and sample. If you like your pickles crisp, that may be enough time. If they aren’t pickled enough for you, let them stay on the counter another few days.
8. When you like how they taste, remove the cup and seal the top. Refrigerate the container.

In Morocco, virtually any vegetable can be preserved. In the class, we were shown green beans, fennel, parsnips and carrots. Experiment and see what you like, including asparagus, zucchini, beets, daikon, eggplant, daikon and broccoli. 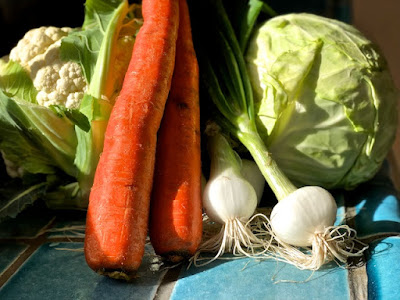 For myself, over the years I have settled on onions, carrots, cauliflower florets and green cabbage.
Whatever you try, prepare the vegetable by washing, peeling and cutting them into pieces similar in size, about a 1/4"
The fun thing about pickling is you can personalize your pickles, making them any way you like.

2. Finalize the prep on the cauliflower by using a sharp pairing knife to create 1" long florets about 1/4" thick. Use the remaining stems for a stir fry or soup. 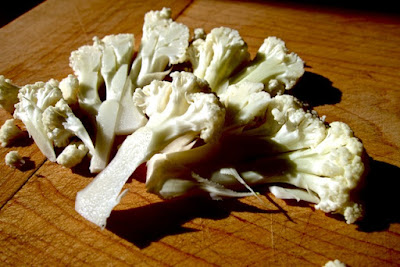 3. Toss the vegetables together to mix well in a large bowl.

4. Place the mixed vegetables into the two jars.

5. Add equal amounts of the aromatics to each jar.
6. Combine the kosher salt, water and vinegar. Mix well. Taste. If you find the mixture too acidic, slowly add water until you like the flavor. If not salty enough, add a small amount of kosher salt
7. Pour the water-vinegar mixture into the jars, making sure the liquid covers the vegetables. If more liquid is needed, make more brine and reserve any left over.

8. Top off each jar with equal amounts of olive oil.
9. Seal the jars and shake well to dissolve the salt and mix the aromatics.
10. Refrigerate. Wait one week and taste. Wait longer if they aren’t pickled enough. They will keep in the refrigerator for months.