A Travel Gallery of Rhode Island

Ever been to Rhode Island? Know where it is? You've probably heard it's the smallest state in the union and that a lot of rich people built fancy mansions in Newport.

I lived there many years ago, so I know that Rhode Island is in Southern New England, a couple of hours north of New York on I-95. Wedged between Connecticut and Massachusetts, it's easily reachable by car, Amtrak, ferry, or bus.

Called the Ocean State because it has hundreds of miles of coastline, Providence is the largest city and state capital, home to Trinity Repertory Theater, Brown University, and the Rhode Island School of Design (RISD).

All that I knew, but what I learned on a recent trip is that the state has become an amazing place to eat.

In the summer, roadside stands are everywhere, filled with fresh corn, tomatoes, squash, peaches, and plums. In the fall, the stands have pyramids of pumpkins, baskets of local apples, and jugs of freshly squeezed apple cider.

When I lived in Rhode Island, I stayed close to Providence. On this trip, I wandered around the state, spending time in Newport, Block Island, Little Compton, Bristol, and South County.

I discovered what the locals know. There are hundreds of bike paths, walking trails, public parks, and nature preserves that make the state a paradise for those who enjoy connecting with nature. Block Island, a few miles off the southern tip of the state, is a refuge from city life, a place to ride around on your bike, stop for a lobster roll at a waterside restaurant, take a nap, read a book, and walk on the grass topped beaches.

I put together a travel gallery of Rhode Island for the New York Daily News web site. Later this month the profiles of the restaurants I visited on the trip will post on Peter Greenberg's web site.

I had a great trip and expect to be back. In the meantime, I have a lot of photographs to help me remember what a great time I had.

We had Hanukkah dinner last night and, while eating our friend Paula's excellent latkes, the conversation turned to favorite recipes. Last year I posted my Yukon gold recipe and I think it's worth reposting. Latkes are good through out the holiday season, even on New Year's Eve when a late night snack of latkes and champagne is a perfect way to ring in the New Year.

For dinner on the first night of Hanukkah my mother always started with a romaine lettuce salad topped with scallions and Lawry's French Dressing. Then there was a brisket of beef with carrots and mushroom gravy. But the real stars of the meal were the latkes served with apple sauce and sour cream.

My mother's latke recipe was handed down from her mother: grated potatoes, eggs, flour, a little salt and pepper. She'd fry them in vegetable oil and serve them as soon as they were browned. So simple and yet the result was so soul-comforting: crispy on the outside, soft inside, with just the right amount of oil and salt. There are few dishes that are as satisfying as food and so emotionally evocative.

Like most kids, my sister, Barbara, and I waited eagerly at the table. As soon as the plate full of latkes was passed around, we emptied it. I kept count, because I didn't want her to have more than I did. They were that good. When my grandmother was in town, she and my mother made Hanukkah dinner together. Their relationship was competitive to say the least, so there was always considerable discussion about the right way to make the latkes: flour vs. matzo meal; onions or no onions. My grandmother liked to point out that she had given my mother her latkes recipe but my mom insisted that she hadn't remembered it correctly.

These days we look forward to celebrating all the nights of Hanukkah but the first night is special. That's when both our sons are certain to be home. Now that they're off on their own, we're happy when we can be assured they'll share a meal with us.

Michelle likes to make the Hanukkah latkes and they're always delicious. Her recipe is similar to my mother's. This year I asked her to make a small adjustment. I wanted her to use Yukon Golds instead of Russet potatoes because they're sweeter and less starchy.

After the first night's candle was lit and placed in the menorah, presents were given and opened. Then Michelle made latkes as fast as she could and they disappeared as soon as they arrived at the table. In the end, there were only two left. Michael ate those for a late night snack. The family's opinion was unanimous. The Yukon Gold latkes were a keeper. 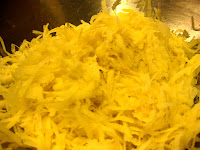 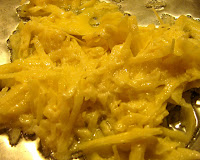 Peel the potatoes and keep them covered in a bowl of lightly salted water so they won't discolor. Using the large holes, grate the potatoes by hand. Keep the grated potatoes submerged in the bowl of water.

Take a handful of grated potatoes. Gently squeeze out the water so they are "dry" but still light and fluffy. Put the grated potatoes into a second bowl and mix together with the eggs, flour, and olive oil. Season with sea salt and pepper. Add the parsley and onions (optional). Mix well. 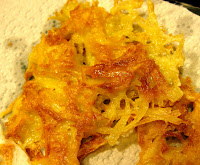 Heat the oil in a large frying pan or griddle. Use a parsley leaf to test the oil. When it sizzles, the oil is hot enough. Form the latkes and fry them in batches. With our griddle, that means we can make 4 or 6 at a time.

Each side will take 4-5 minutes. When they're golden brown on each side, remove them to a plate with several sheets of paper towels to drain off the excess oil. Finish with a light dusting of sea salt.

Serve with sour cream and apple sauce.
at December 13, 2009 No comments: