Now & Later Meals: Grilled Corn Has a Second Act as a Salad

on the cob is one of the great markers of summer.

When I was growing up, my mom loved to search out road side stands that sold fresh corn. She'd buy a grocery bag full and we'd feast on boiled corn with slabs of melting butter, seasoned liberally with salt and pepper.

I still enjoy corn that way, but now more often than not our corn on the cob comes to the table grilled not boiled.

Shucked and drizzled with olive oil, seasoned with sea salt and pepper, then turned on a grill until lightly browned, the naturally sweet kernels are sweetened even more by caramelization. Yumm.

For a snack, nothing is better than an ear of corn pulled from the refrigerator. But there's more that can be done with those grilled ears of corn. Cutting the kernels off, they can go into a chopped salad and move from side dish to entree.

And on hot days, that's another marker of summer--putting meals on the table with as little effort as possible.

NOW: Grilled Corn on the Cob 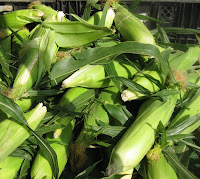 The most important part of this recipe is the corn itself. The fresher the corn, the better the taste. When you're picking out corn, select ears that have green husks and golden silks. 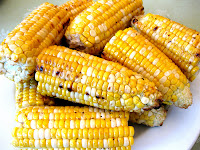 Break the ears in half or cut into 3" lengths. The ears you're saving to make the salad can be left whole. Pour the olive oil onto a large plate. Season with sea salt and pepper. Roll each piece of corn in the oil.

Using tongs, grill the corn on all sides until lightly browned. Remove from the grill and serve hot.

The salad can be prepared ahead and refrigerated but it tastes better if served at room temperature. 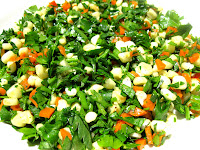 Put the balsamic vinegar in a small saucepan and reduce by half over a low flame. Set aside to cool.

Using a sharp knife, cut off the kernels and put into a mixing bowl. Place the garlic clove on a skewer or the point of a sharp knife. Char in a flame so the skin burns off. Brush off any bits of burnt skin and roughly chop the garlic.

Add the charred garlic, parsley, and onions to the mixing bowl. Drizzle with the olive oil and reduced balsamic vinegar. Season to taste with sea salt and pepper.

Transfer to a serving dish.

Instead of using a raw carrot, grill a carrot cut into slabs 1/4" thick; dredged the slabs in seasoned olive oil and grill until lightly browned; let cool and chop into pieces the same size as the corn kernels; add to the salad

Grill asparagus dredged in seasoned olive oil, then chop into pieces and add to the salad

Quarter cherry tomatoes and add to the salad

Crumble 3 pieces of crisp bacon on the salad and toss 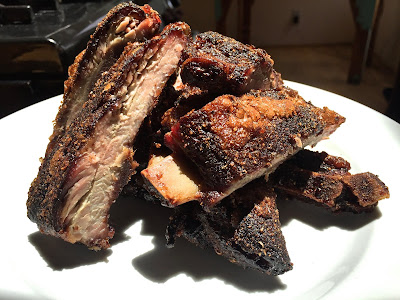