What comes with an entrée may be more flavorful than the entrée itself. Grilled chicken breast is a case in point: it's ok, healthy but flavor-wise, nothing special. Put a side of homemade carrot salad on the plate and everything changes. The addition of the creamy, spicy carrot salad compliments the neutral flavor of the breast. I'm in heaven. 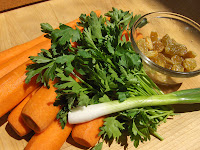 The key to that sentiment is "homemade". Carrot salad bought from upscale Gelson's or even Nate n'Al's just won't do. I've taken the classic deli recipe and given it a couple of flavor enhancers: a pinch of cayenne and golden raisins soaked in lemon juice. With those added flavors, the salad can hold its own with an infinite variety of dishes: grilled chicken, steak, hamburger, pork chops, lamb chops, duck, even an avocado for a vegetarian meal. 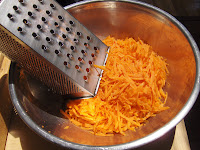 Use cilantro instead of Italian parsley
Add capers

A post from several years ago with recipes for the way we prepare the turkey, stuffing and gravy. This year we bought a 20 pound organic tur...